Indian golfer SSP Chowrasia stayed consistent with a one-under 71 in the fourth and final round to finish at tied 32nd as the best Indian in the M2M Russian Open golf tournament in Moscow on Sunday.

Chowrasia, who had even par 72 in each of the first three rounds, had three birdies and two bogeys for a one-under 287 total for four days. 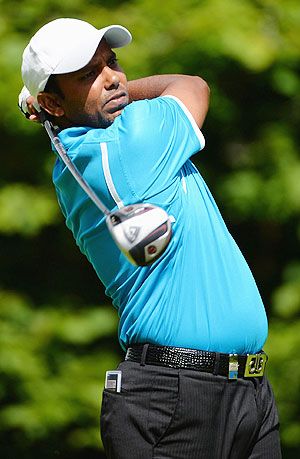 Jeev Milkha Singh slipped down from overnight 25th place to 42nd after a nightmarish four-over 40 on front nine. He carded three-over 75 and finished at one-over 289.

Meanwhile, Michael Hoey romped to a four shot victory as he sealed a fifth European Tour title. The Northern Irishman started the day with a four shot lead after a brilliant third round 65.

On the final day, a closing two-under 70 was enough to give Hoey a 16-under par total and four shot winning margin over France's Alexandre Kaleka (68) and England's Matthew Nixon (69).

Chowrasia, who has made eight cuts in 15 starts, said, "I am happy that I was consistent this week in that I did not go over par on any of the four days. That was despite a big number in each of the first three rounds, when I had two doubles and one triple. I feel I am getting closer to the form that I have been striving for."

Hoey, whose last win came at Trophee Hassan in 2012, said, "I have absolutely loved the golf course this week. It is a great Nicklaus design and one of the best we will play on Tour for the whole year. The greens are just so pure and when you have surfaces like that to putt on then you can make a lot of putts.

"The putting was the key for me this week. I have been working hard on that a lot recently and the improvement is really showing because I making a lot of birdies.

"It's pretty amazing to think that I have won five European Tour titles. It is a great feeling to win and every time you do it you just want more and more. Hopefully I can get at least another one before the end of the season."

The 34-year-old Hoey, who had not finished better than 25th on The European Tour this season and missed seven of his last ten cuts coming into the event, began his final round with six consecutive pars but birdies at the seventh and eighth saw him advance to 16 under par and turn five clear.

His only dropped shot of the day came at the 12th, and last year's winner Kaleka and Dane JB Hansen closed the gap to two before Hoey birdied the 17th, with both his nearest challengers dropping shots on the last.

Kaleka, who captured this title last year when it formed part of the Challenge Tour schedule, had five birdies before bogeying the 18th for a 68, while Nixon came home in 33 for a 69.

Hansen finished alone in fourth after dropping two shots on the 18th for a 68, with China's Liang Wen-chong, France's Gregory Havret and English pair James Morrison and Mark Foster a shot further back on ten under.