'The event happened 70 years ago, but it feels like only yesterday. I still remember the feeling when the Indian flag was hoisted at the 1948 Olympics when we beat Britain 4-0.' Seventy years after Independent India won its first Olympic gold in hockey in London defeating Britain, living legend Balbir Singh Sr. went down the memory lanes and said he was overwhelmed by a sense of patriotism after the triumph.

"The event happened 70 years ago, but it feels like only yesterday. I still remember the feeling when the Indian flag was hoisted at the 1948 Olympics when we beat Britain 4-0," Balbir Sr said.

"As our national anthem was being played and the tri-colour was going up, I felt that I too was flying with the flag. The sense of patriotism that I felt is beyond any other feeling in the world," the 94-year-old triple Olympic gold medallist reminisced.

Balbir Sr, who started as a goalkeeper before moving up as a full-back and eventually a centre-forward, said that the win was also special as it was over India's once colonial masters, who had ruled until a year back then.

The victorious team had received a grand welcome from the Indian fans upon their return home.

A commemorative function was organised at the Chandigarh Press Club on Sunday to mark the 70th anniversary of the event when the tri-colour was hoisted for the first time on this day in 1948 at London's Wembley stadium after India had defeated Britain to win the Olympic gold in men's hockey, a win in which Balbir Sr played an leading role by scoring two goals.

He recalled that despite being in tremendous form he was not selected among the 39 probables for the finals in 1948 and some of his well wishers even approached the then Indian High Commissioner in London, V K Krishna Menon and sought his help.

Balbir Sr said it was only after Menon's intervention and the voices asking for his inclusion in the team growing louder that he secured a place in the playing eleven. 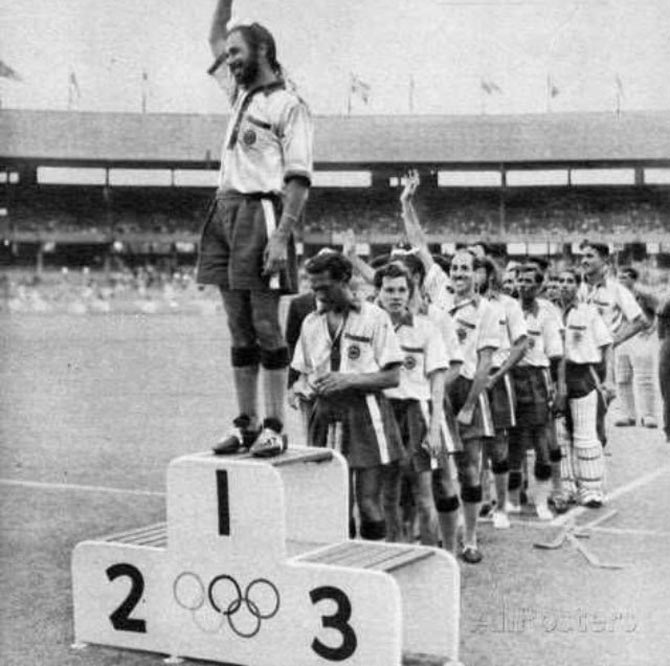 Balbir Sr, wearing a blue blazer and a red tie, hoisted the tricolour at the function amid thunderous applause from the gathering that also included Chandigarh Hockey Association's senior functionaries and the legend's daughter Sushbir Kaur and grandson Kabir.

After unfurling the tri-colour, Balbir Sr recalled, "It was a proud moment for all of us when we defeated England, which had until a year ago ruled India for a long period, on their own turf (in 1948).

"I still remember that before the match started, the Wembley stadium was reverberating with the noise of English fans. As we took an early lead and later on pumped another goal, after the half time, some English fans started rooting for India, saying make it half a dozen goals," he remembered.

Notably, in the 2012 London Olympics, the iconic centre forward was honoured as the only Indian among 16 chosen Olympic legends across modern Olympic history.

His world record for most goals scored by an individual in the men's hockey final of the Olympics still remains unbeaten. He had scored five goals in India's 6-1 victory over Netherlands in the gold medal match of the 1952 Helsinki Games.

Balbir Sr, meanwhile, left for Delhi to attend a special screening of movie "Gold", a sports drama inspired by real events during the 1948 Olympics when Independent India won its first Olympic gold medal in field hockey.