IMAGES from the UEFA Champions League second semi-final played between Bayern Munich and Olympique Lyonnais at Estadio Jose Alvalade in Lisbon on Wednesday. Bayern Munich powered into the Champions League final, where they will face Paris St Germain, as two goals from Serge Gnabry led them to an emphatic 3-0 win over Olympique Lyonnais on Wednesday.

Bayern will bid for their sixth European Cup triumph when they come up against Neymar and Kylian Mbappe on Sunday and after convincingly beating Chelsea, Barcelona and now Lyon, Hansi Flick's side will surely start as favourites.

The Germans are unbeaten in 2020, winning 24 of 25 matches in all competitions and they have won every Champions League game this season. No team has ever won the Champions League with a 100 percent record but while Bayern will fancy their chances, PSG's powerful attack should make for an entertaining contest.

"Paris are a good team. For now we celebrate a little bit but afterwards we focus on the next game," said Bayern's Canadian left back Alphonso Davies.

"It's going to be a good game, there's going to be goals in it. This is what you dream of as a footballer – playing against the best in Europe. And we're able to do that, I'm excited," he added.

PSG will take hope from the early chances that Lyon created -- Memphis Depay found space behind the Bayern defence but, forced wide, he could only shoot into the side-netting. Lyon, who upset Juventus and Manchester City in the previous rounds, had warmed up on the field before the game with rarely-seen intensity and it showed as they took the game to Bayern and they went close again in the 17th minute.

Powerful striker Karl Toko Ekambi found space in the Bayern box and should have done better after his first shot was blocked and his follow-up effort struck the post.

But moments later Bayern grabbed the lead – a clever ball from Joshua Kimmich found Gnabry who danced in from the right and unleashed an unstoppable shot, from over 20 metres out, into the top corner. Gnabry went close again with a snap-shot that Lyon keeper Anthony Lopes did well to keep out as Bayern pushed hard for a second.

It came in the 33rd minute -- and was started and finished by Gnabry.

The former Arsenal midfielder fed Ivan Perisic on the left and the Croatian's low cross found Robert Lewandowski at the back post.

His weak shot was saved by Lopes, only for the alert Gnabry to pounce and convert his ninth goal in nine Champions League games.

Lewandowski, looking well below his usual levels of sharpness, had another good chance after the interval, but he again made it too easy for Lopes, leaving Lyon still with hope. Moussa Dembele, the two-goal hero in the quarter-final win over Manchester City, came on for Depay in the 58th minute and added much-needed life to the Lyon attack.

But once again, when the chance came for the French side, they failed to make the most of it -- Houssem Aouar finding Ekambi in the box but the Cameroonian's finish was straight at Manuel Neuer.

Bayern lacked the intensity of their first-half display but they made sure of the win in the 88th minute when Lewandowski rose to head home a Kimmich cross from a free kick for his 15th Champions League goal this season. Lewandowski has scored in nine straight UEFA Champions League matches – only Cristiano Ronaldo (11) has a longer streak -- and has notched 55 goals in all competitions this season.

Lyon's disappointment will be stronger given that their seventh-place finish in the French league means they will not be competing in European football next season.

"We knew that we were up against a better team and we stuck to our game plan but to beat such a team, you need to score when you have the chance," said Lyon sports director Juninho.

"Maybe it would have been different if we had converted our early chances."

© Copyright 2021 Reuters Limited. All rights reserved. Republication or redistribution of Reuters content, including by framing or similar means, is expressly prohibited without the prior written consent of Reuters. Reuters shall not be liable for any errors or delays in the content, or for any actions taken in reliance thereon.
Related News: Bayern Munich, Lyon, Robert Lewandowski, Serge Gnabry, Getty Images
SHARE THIS STORYCOMMENT
Print this article 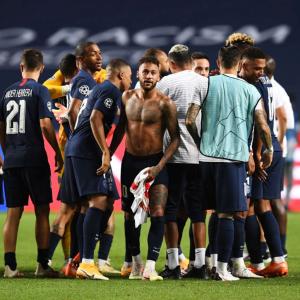