Poland's Anita Wlodarczyk won a third straight Olympic gold on Tuesday, dominating the women's hammer throw final and further cementing her status as the greatest of all time in the event.

The world record holder threw her first attempt into the net but recovered for her best performance of the season, launching the hammer 78.48 metres in the fourth round to become the first woman to win an individual Olympic athletics event three times in a row.

Wlodarczyk has been a force of nature in the event since winning the first of her four world titles in 2009. She missed the 2019 World Championships in Doha due to surgery for a knee injury.

"I feel good. I was dreaming of becoming the queen of the hammer throw," she told reporters.

"I have been injured and came right back from it and won an Olympic medal."

It was the second athletics gold for Poland in Tokyo, after their 4x400m mixed relay team won on Saturday.

China's Wang Zheng took the silver on her final throw of 77.03 and Poland's Malwina Kopron finished with the bronze. It was the first Olympic medal for both.

"Perhaps this is the last Olympic Games for me and also the last throw of my Olympic career," Wang told reporters, via a translator. "After so many years of my effort this is the last release of my energy."

American DeAnna Price, the 2019 world champion and among the favourites after producing the best throw of 2021 in June, could not find her power during the final, finishing eighth overall. 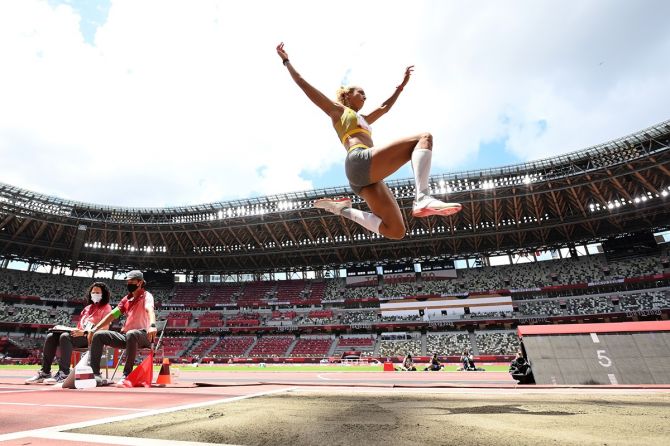 World champion Malaika Mihambo of Germany snatched the Olympic gold in women's long jump with her final leap of 7.00 metres in an enthralling final at the Tokyo Games on Tuesday.

A day after Greek Miltiadis Tentoglou won the men's long jump in the most dramatic fashion with his final attempt, the women's competition followed a similar script.

After an exciting competition during which the lead changed hands frequently between Brittney Reese and Ese Brume, Mihambo, who was placed third going into the final round, settled the deal with her last leap.

"I feel overwhelmed. It was, I think, the most exciting women's long jump competition in history," Mihambo said. "It was so exciting to be part of it and I am happy I made it at the end.

"I knew that I could jump farther than 6.95m. I just needed to hit the board. I knew all the time that I could do it. I just knew that I had one last attempt to do it and I am so happy to grab the gold."

Reese and Nigerian Brume finished tied on 6.97 but the American took the silver owing to her second-best jump of 6.95 which was five centimetres longer than Brume's effort. Brume, the bronze medallist at the 2019 world championships in Doha, arrived in Tokyo with the biggest jump of the season of 7.17m and she set the standard early at the sun-lit Olympic Stadium with an opening leap of 6.97.

The 2012 champion in London and the silver medallist in Rio de Janeiro five years back, Reese matched that effort in her third attempt.

Brume wrested back the lead in the following round with a 6.88, her second-best effort one centimetre longer than the American's fourth jump.

But the 34-year-old Reese, who also has four outdoor and three indoor world titles, would not be denied as she registered 6.95 with her fifth jump to climb to the top again.

The sparse crowd, mostly made up of team members of the competitors, would not be blamed if they anticipated a bumper jump-out between Reese and Brume going into the last leap, but it was Mihambo who stole the limelight.

The 27-year-old had a nervous wait as Reese and Brume still had their final attempts remaining but once they failed to better her mark, the German broke into celebration, draping herself in her country's flag.

It was a record-equalling third Olympic gold medal in the women's long jump for Germany with the United States also having won three.

Athing Mu of the United States won the gold medal in the Olympic women's 800 metres final on Tuesday, her country's first victory in the event in more than half a century, as her compatriot Raevyn Rogers grabbed bronze.

The absence of South Africa's double champion Caster Semenya, ruled ineligible due to heightened testosterone levels, opened up the field to a new winner.

Mu took full advantage as she dominated the race, leading almost from the start and crossing the line clear of her rivals in a time of 1:55.21.

The 21-year-old Duplantis, who finished with a silver medal behind world champion Sam Kendricks of the United States in 2019, remained the only man to fly over six metres this year.

American Chris Nilsen cleared the bar at 5.97 with his first attempt but could not match Duplantis and picked up the silver medal.

Brazil's Thiago Braz, who won the title at his home Olympics in Rio de Janeiro five years ago, took bronze with his effort of 5.87.

© Copyright 2021 Reuters Limited. All rights reserved. Republication or redistribution of Reuters content, including by framing or similar means, is expressly prohibited without the prior written consent of Reuters. Reuters shall not be liable for any errors or delays in the content, or for any actions taken in reliance thereon.
Related News: Malaika Mihambo, Ese Brume, Brittney Reese, Germany, Getty Images
COMMENT
Print this article 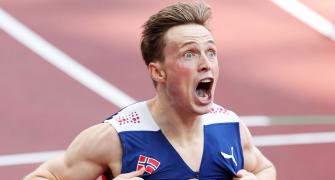 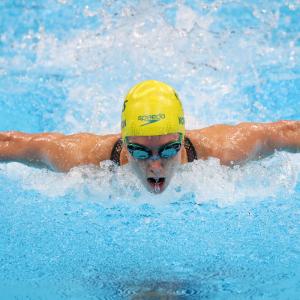 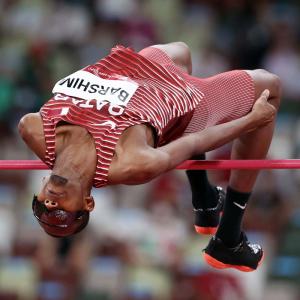