German football club allowed to have fans in stadium

'With this approval we want to dare to go a bit towards normalcy.' 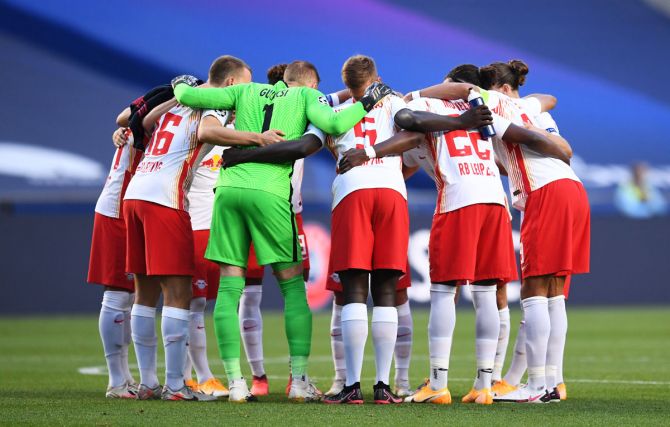 IMAGE: RB Leipzig could have fans back in their ground against Mainz 05 on September 20 if novel coronavirus infection rates in the region remain at current levels.. Photograph: David Ramos/Getty Images

RB Leipzig have become the first Bundesliga club allowed to have some fans back in their stadium for their season opener next month after the city's health authority on Tuesday gave the green light for up to 8,500 spectators to attend.

The city said the club, who last month were knocked out of the Champions League in the semi-finals, could have fans back in their ground against Mainz 05 on September 20 if novel coronavirus infection rates in the region remain at current levels.

"After a detailed examination the Leipzig health authority has approved the strict health plan of Bundesliga club RB Leipzig," the city said in a statement.

All fans will have to wear face masks and will be placed in small groups spread across the 42,000-capacity stadium. There will be no visiting spectators and all supporters must provide personal details and be local residents.

"With this approval we want to dare to go a bit towards normalcy," Leipzig mayor Burkhart Jung said.

"We are aware that the pandemic is far from beaten. But wherever possible -- under strict conditions -- people must be allowed to return to their daily routines."

Bundesliga clubs have been playing without fans since March. The league was interrupted between March and May due to the COVID-19 pandemic and resumed without spectators.

Germany recorded 1,218 new cases of the virus and four deaths on Tuesday with the total death toll at 9,302.