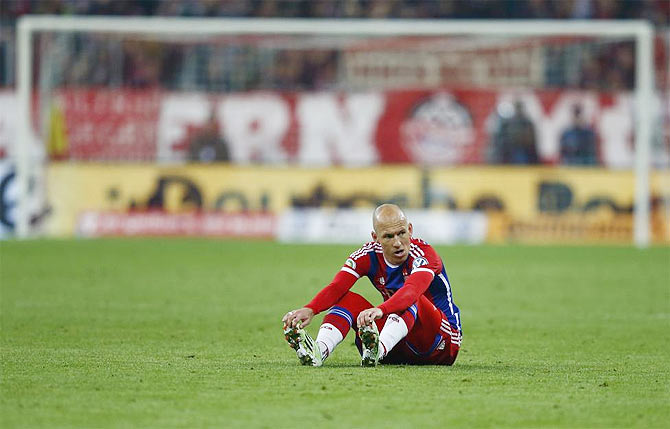 Bayern Munich's Arjen Robben is out for the season after tearing a muscle in their German Cup semi-final defeat by Borussia Dortmund on Tuesday while Robert Lewandowski broke his jaw and nose and suffered concussion.

The injuries come days before Bayern travel to Barcelona for next week's Champions League last four clash, dealing a major blow to their hopes of lifting the trophy on home soil with the final scheduled to be played in Berlin in June.

"Arjen Robben suffered a torn muscle in his left calf and his season is over after only making his comeback against Dortmund," Bayern said in a statement on Wednesday.

The Dutchman, who had a stellar season, scoring 17 league goals until his injury in March, lasted just 16 minutes as a second half substitute for the injured Thiago Alcantara.

Lewandowski, who was knocked down in a rough challenge by Dortmund goalkeeper, Mitch Langerak, broke his upper jaw and nose and suffered a concussion. 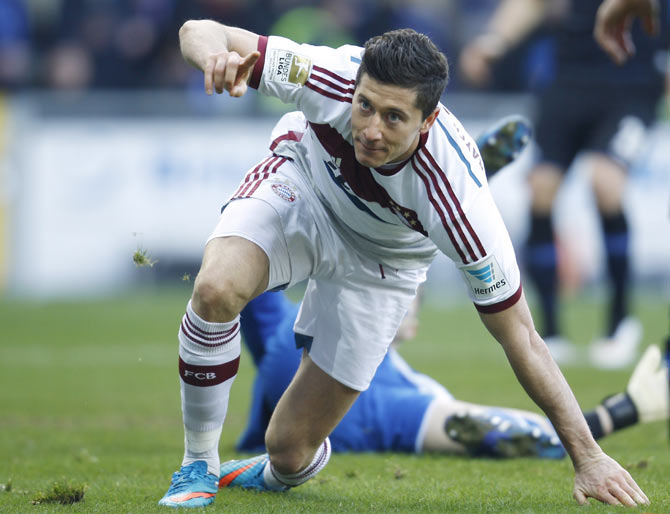 The in-form Poland striker had scored nine goals in his last 11 matches for the Bavarians, who secured the Bundesliga title last week with four games to spare.

While Bayern said more medical checks would be required to determine the length of Lewandowski's absence he looks highly unlikely to be fit for next Wednesday's Champions League semi-final, first leg in Barcelona.

Bayern are already without Franck Ribery and David Alaba, while Bastian Schweinsteiger has only just returned to action.

There was some good news amidst the gloom with Thiago, who returned recently after a year out injured, having suffered no major damage from a knock on his thigh.

Bayern's 2-0 defeat on penalties to Dortmund, with all four Bayern players failing to score from the spot, meant they missed the chance to repeat their 2013 treble.