French Open: Serena, Federer waltz into round 2; Hewitt knocked out

Serena Williams and Roger Federer both enjoyed Sunday afternoon strolls at Roland Garros as they seized the opportunity to gain head starts over their French Open rivals in ruthless fashion.

A year after suffering her only first round loss in a Grand Slam, a defeat that still haunts her, American Williams destroyed Georgian Anna Tatishvili 6-0, 6-1 in an ominous 51-minute display of power tennis.

Federer followed Williams on to a less than full Chatrier court and barely raised a sweat in cool, overcast conditions as he disposed of Grand Slam debutant Pablo Carreno-Busta. 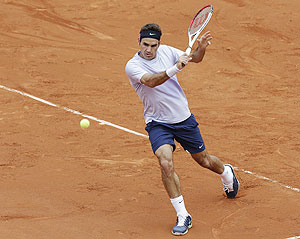 The Swiss former champion, seeded two and with a realistic chance of reaching the final after being placed in the opposite half of the draw to his Roland Garros nemesis Rafa Nadal and World No 1 Novak Djokovic, breezed to a 6-2, 6-2, 6-3 victory over the fresh-faced Spaniard.

Serbian Ana Ivanovic, a third former French Open champion scheduled to brighten up a first day which featured 32 matches, had to work a little harder to reach the second round.

The 2008 champion, who has never hit those heights again, got past Croatia’s Petra Martic despite losing a set.

Gilles Simon, one of six Frenchmen seeded as the host nation desperately craves a first male champion since Yannick Noah in 1983, gave fans on Suzanne Lenglen anxiety attacks as he lost the opening two sets to old warrior Lleyton Hewitt before recovering to win 3-6 1-6 6-4 6-1 7-5.

Federer once had his nose put out of joint when forced to launch the French Open’s Sunday start, unique amongst the four Grand Slams, in 2006, describing it as “tricky”.

However, there was nothing complicated about a swift victory over a 21-year-old rookie who had won seven consecutive titles at the lower Futures level of the men’s tour this season.

“I remember they sort of forced me to play on Sunday years back to promote their Sunday thing,” Federer said.

“Wimbledon does it in 13 days and the French does it in 15. So it doesn’t make sense. But I do understand that a weekend for tennis is very important for the people who can show up.

“But I’m happy this time around. I told them if they wanted me to play Sunday, whatever, I’m fine with it. They took that opportunity right away.”

Williams turned her first round match against Tatishvili, a player who reached the fourth round of last year’s U.S. Open, into little more than a practice session.

Looking confident and razor-sharp on the back of a 24-match winning streak, the 2002 champion took the first set in 20 minutes, striking winners with nonchalant ease.

“I have to say I’m always a little nervous going into first round matches at slams, but this time I wasn’t as nervous as I was previously,” said the 31-year-old, who has been almost unbeatable since a shock loss to Virginie Razzano last year.

“I felt pretty safe and felt good about my game and that if I can just do what I do in practice, I’ll be okay.”