IMAGES from Day 7 of the French Open, at Roland Garros, on Saturday. Top seed Novak Djokovic continued his imperious progress at the French Open with a 6-0, 6-3, 6-2 drubbing of Colombian Daniel Galan to effortlessly reach the last 16 for the 11th straight year on Saturday.

The 33-year-old was rarely extended by his 153rd-ranked opponent and even found time to double up as a court sweeper when the match was briefly interrupted by rain.

Djokovic, like 12-time champion Rafael Nadal, has reached the fourth round without the loss of a set although things will toughen up with powerful Russian Karen Khachanov up next.

The 33-year-old Serb won the first set in 28 minutes and when he broke for a 2-0 lead in the second set a rare 'triple bagel' looked a possibility. 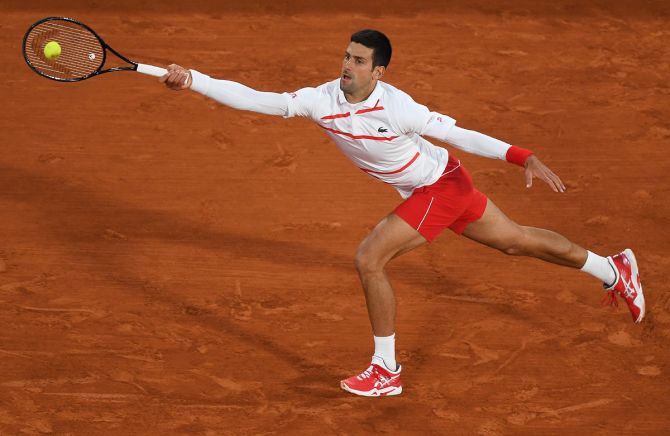 But Galan, a lucky loser from qualifying, got on the board with a rasping forehand winner which brought loud cheers from the small crowd on Court Philippe Chatrier.

With heavy rain falling and the new roof sliding slowly across, meaning Galan was exposed to the elements and Djokovic was not, the Serb ordered the chair umpire to halt play after his opponent slipped during a rally on the muddy baseline.

After groundsmen with wheelbarrows had spread more clay across the court to improve the slimy surface, a laughing Djokovic offered a hand, grabbing a sweeper, before resuming his day job with the roof closed.

Djokovic was surprised the roof had not been closed earlier.

"I saw the forecast and it didn’t look good at all," he said. "If you have a roof why not use it. I thought we lost quite a bit of time." He has certainly not been wasting any time so far in the French capital and once play resumed the outcome was never in doubt, although Galan did make the world number one work up a sweat with some courageous tennis of his own.

Djokovic, bidding for his second title at Roland Garros and 18th Grand Slam, saved four break points in a competitive third set before completing his 71st French Open match win, taking him past Roger Federer into second place behind Nadal who has 96. 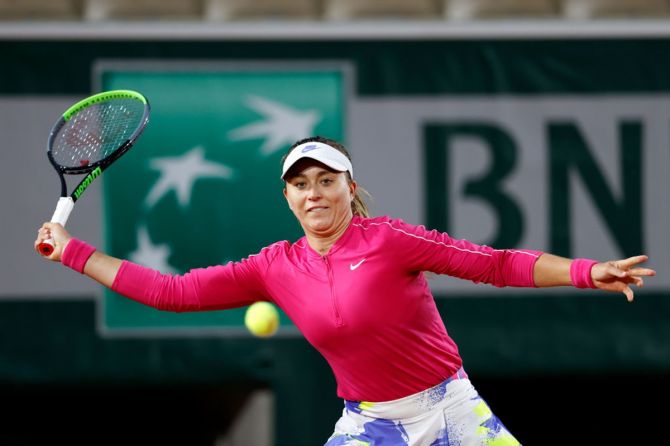 IMAGE: Paula Badosa, winner of the 2015 junior title in Paris, will next face German Laura Siegemund for her maiden appearance in the last 16 of a Grand Slam. Photograph: Clive Brunskill/Getty Images

Former champion Jelena Ostapenko was knocked out of the French Open, beaten 6-4, 6-3 by Spain’s Paula Badosa in the third round on Saturday.

The Latvian, who lifted the Suzanne Lenglen Cup in 2017, lacked control as she hit 32 winners but dished up 43 unforced errors in only one hour and 22 minutes.

Ostapenko threatened a comeback in the second set but was too inconsistent, a woeful double fault earning Badosa a match-point, which she converted when the Latvian whacked a forehand wide.

Badosa, who also beat 2018 Roland Garros runner-up Sloane Stephens in the second round, was overwhelmed after causing another upset, sobbing in her towel as Ostapenko left the court.

Badosa, winner of the 2015 junior title in Paris, will next face German Laura Siegemund for her maiden appearance in the last 16 of a Grand Slam.

Her previous best performance at a major was reaching this year’s Australian Open second round. 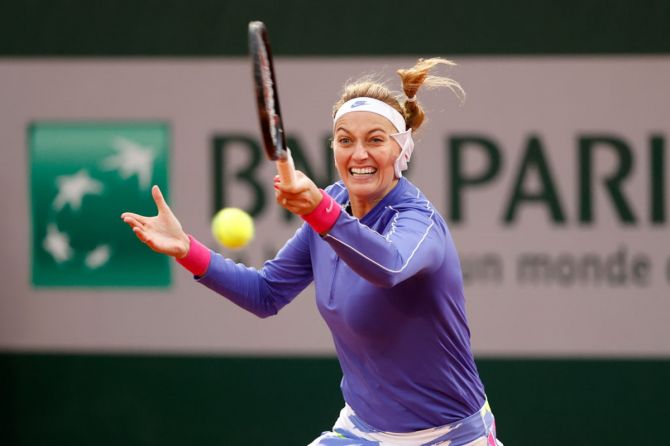 Petra Kvitova required all her firepower to subdue Canadian teenager Leylah Fernandez as she overcame a terrible start to win 7-5, 6-3 and reach the French Open fourth round on Saturday.

The 30-year-old Czech struck 32 winners and needed every one of them to halt her young opponent’s dream debut.

Kvitova was caught cold on a clammy Court Suzanne Lenglen as she trailed 5-1 in the opening set against last year’s French Open junior champion who played beautifully early on.

Kvitova had to save a set point at 1-5 and another at 3-5 before her power game really began to have an impact.

She won nine games in a row to take charge but the 5ft 4ins Fernandez, the youngest player left in the draw, never looked flustered as she continued asking questions of her fellow left-hander with clever shot-making.

Fernandez recovered one break of serve in the second set and, with Kvitova showing signs of anxiety, had two more break points to level the set at 4-4 but Kvitova held firm to move 5-3 ahead with a superbly-angled volley.

There was a fair amount of relief in Kvitova’s expression as she hammered a winner for victory, offering some warm words to her opponent at the net.

Twice Wimbledon champion Kvitova has reached the fourth round in Paris for the fifth time and will be starting to fancy her chances with China’s unseeded Shuai Zhang up next. IMAGE: Sofia Kenin of the United States lost the first two games before turning on the power to beat Romania's Irina Bara at the French Open on Saturday. Photograph: Shaun Botterill/Getty Images

American fourth seed Sofia Kenin stormed into the fourth round of the French Open with a 6-2, 6-0 demolition of Romanian qualifier Irina Bara on Saturday.

The Australian Open champion lost the first two games before turning on the power and winning the remaining 12 to reach the last 16 at Roland Garros for the second time.

Bara took her chances early on and broke for 2-0 but her hopes of a major upset were shortlived as Kenin shook her early jitters to advance.

She only had trouble finishing it off on her own serve, most of her drop shot attempts failing in embarrassing fashion.

Kenin could face a Romanian player for the third round in a row if Patricia Maria Tig beats Frenchwoman Fiona Ferro later on Saturday.

Tunisia's Ons Jabeur celebrates after winning a point during her third round match against Aryna Sabalenka of Belarus.

Tsitsipas through after injured Bedene retires 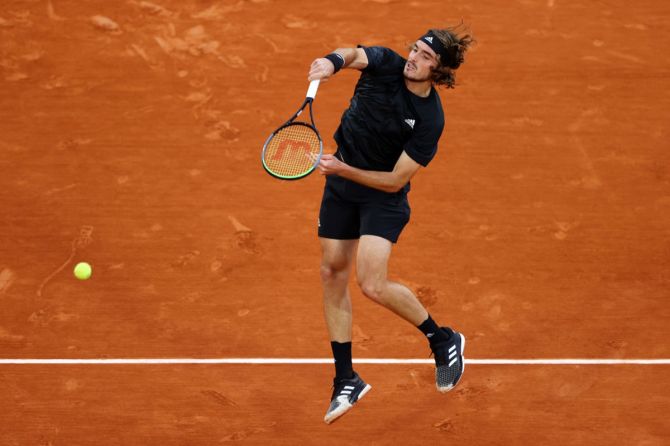 Greek fifth seed Stefanos Tsitsipas advanced to the fourth round of the French Open on Saturday after his opponent Aljaz Bedene retired with an ankle injury while trailing 6-1, 6-2, 3-1.

Slovenian Bedene, who defeated Tsitsipas in straight sets when they met at Rotterdam earlier this year, first called for the physiotherapist on Court Suzanne Lenglen to get treatment on his right ankle after going down 5-0 in the opening set.

After returning to court Bedene won the first game to get on the scoreboard and then got his ankle strapped before the start of the second set.

Tsitsipas, the reigning ATP Finals champion, kept his focus and went about his business smoothly, hitting 28 winners and breaking the 56th-ranked Bedene’s serve five times before the 31-year-old decided he could no longer continue.

In his fourth round, the Greek will play the winner of the match between Bulgarian 18th seed Grigor Dimitrov and Roberto Carballes Baena of Spain. IMAGE: Tunisia's Ons Jabeur celebrates after winning a point during her third round match against Aryna Sabalenka of Belarus. Photograph: Julian Finney/Getty Images

Tunisia’s Ons Jabeur became the first Arab woman to reach the fourth round of the French Open as she beat eighth seed Aryna Sabalenka 7-6(7), 2-6, 6-3.

The 30th seed displayed her trademark court craft to undermine Sabalenka’s power as she surpassed her previous best third round showing at Roland Garros in 2017.

Sabalenka led 5-1 in the opening set tie break, but a series of errors allowed 26-year-old Jabeur to snatch it.

Former French Open junior champion Jabeur’s level dipped in the face of some fierce Sabalenka hitting as the second set slipped away in little over 20 minutes.

But the Tunisian, who became the first Arab woman to reach a Grand Slam quarter-final in Australia this year, re-grouped and forged 3-0 ahead in the deciding set.

She also had points for a 4-0 lead, but Belarussian Sabalenka upped the intensity and the decibel level to stay in contention.

Sabalenka saved three match points at 2-5, then had a break point in the next game. But Jabeur remained composed as she brought up a match point and showed great touch to angle away a short forehand, then sealing the win with a first serve. 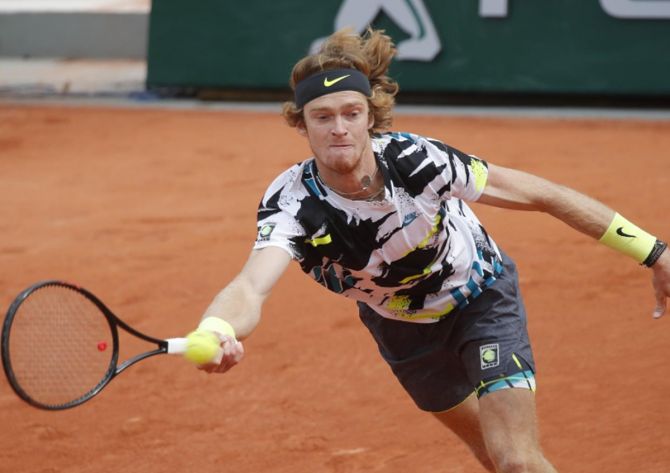 IMAGE: Russia's Andrey Rublev proved too good for South Africa's Kevin Anderson, breaking serve once in the opening set and twice in the next two. Photograph: Charles Paltiau/Reuters

Russian Andrey Rublev strolled into the fourth round of the French Open with a facile 6-3, 6-2, 6-3 win over South African Kevin Anderson on Saturday.

Rublev, seeded 13th at Roland Garros, had lost his only previous meeting against two-time Grand Slam finalist Anderson at the 2015 US Open but did not face a single breakpoint against the 34-year-old on Court Simonne Mathieu.

The 22-year-old, who arrived in Paris after winning the ATP title in Hamburg by defeating Stefanos Tsitsipas, broke Anderson’s serve once in the opening set and twice in the next two to complete the win in an hour and 34 minutes.

In his first appearance in the fourth round of the claycourt Grand Slam, former junior world number one Rublev will play the winner of the third round match between Hungarian Marton Fucsovics and Thiago Monteiro of Brazil. Making his debut at this year’s claycourt Grand Slam at Roland Garros, the 22-year-old broke the off-colour Italian’s serve four times to win their first career meeting in two hours and 15 minutes on Court Philippe Chatrier.

Altmaier hit 23 winners, many of them from his sizzling one-handed backhand, while Berrettini’s powerful game lacked control as he dished up 42 unforced errors, the last of them on match point.

In the fourth round Altmaier will meet the winner of the Spanish battle between 10th seed Roberto Bautista Agut and US Open semi-finalist Pablo Carreno Busta, seeded 17th.