Claycourt master Rafael Nadal passed his first real test of this year’s French Open with a 7-6(4), 6-4, 6-1 victory over Italian rising star Jannik Sinner as his quest for a record-breaking 13th title gathered momentum on Tuesday.

The Spaniard, also looking to match Roger Federer’s record of 20 Grand Slam men’s singles titles, was stretched by the 19-year-old Sinner as he set up a clash with Argentine Diego Schwartzman, who beat him in the Italian Open quarter-finals last month.

The 34-year-old Nadal’s 97 previous victories at Roland Garros made the difference in key moments with the Spaniard rallying from a break down in the first two sets.

Sinner, the first French Open debutant to reach the last eight since Nadal in 2005, confirmed his immense potential but lacked just a bit of composure when it mattered.

“Sinner is a very, very young talent with a lot of power, great shots. For two sets it was tough, especially in the second set I was lucky to be back,” said Nadal after a match played in cold conditions that ended at 0126 local time, the latest finish at a French Open.

“The conditions were a little bit difficult, he was hitting every ball very hard and with this cold, my speed is not there. It was hard for me to put him out of position.

“Now I have two, well almost one and a half days off to rest and practice.”

South Tyrolian Sinner hit powerful groundstrokes, putting Nadal on the backfoot in many rallies on court Philippe Chatrier, only for the Mallorcan to unlock his own massive forehand to turn the tide. IMAGE: Jannik Sinner, the first French Open debutant to reach the last eight since Rafael Nadal in 2005, confirmed his immense potential but lacked just a bit of composure when it mattered. Photograph: Julian Finney/Getty Images

The big-hitting Sinner had the first break point, in the fifth game, but the Italian made an unforced error.

Nadal went into the contest having won 48 of his 50 service games but he was in trouble again at 5-5 when Sinner set up two break points.

He staved off the first with a forehand winner, and the second when Sinner’s return of an ill-timed drop shot by the Spaniard flew long. From deuce, Sinner created another break chance, which was converted when Nadal’s forehand went wide.

Nadal had his first break points in the following game and he converted the third with a stunning forehand winner down the line.

The Spaniard was more consistent in the tiebreak as he moved one set up.

Sinner, who was three when Nadal first lifted the Coupe des Mousquetaires, took time out to have his right abductor muscle massaged. He then came back on court with all guns blazing, breaking for 3-1.

Nadal broke back immediately as Sinner showed his first signs of frustration and the Spaniard broke again in the ninth game before wrapping the set on serve, having significantly raised his game.

Sinner, winner of last year’s ATP NextGen Finals, then hit a wall and despite the Italian’s best efforts and energy, Nadal moved 4-0 up and did not release his grip, ending it with an overhead smash. Schwartzman had never beaten a top-five player at a Grand Slam and had lost his three previous quarter-finals but he produced a relentless display to set that record straight.

Both players appeared to be running on empty at times as they slugged out endless rallies from the baseline for more than five hours on a windy Court Phillipe Chatrier.

Third seed Thiem, the US Open champion, saved a set point in the third before moving two sets to one ahead and when Schwartzman wasted three set points at 5-4 in the fourth it looked as though he was going to fall short. But the 12th seed showed incredible resilience to come back from 3-1 down in the tiebreak to drag it into a final set.

Schwartzman looked the fresher player in the decider and Thiem, bidding to reach a fifth successive French Open semi-final, began to unravel.

The Argentine sensed his moment and forged a break ahead before claiming victory as Thiem dumped a weary-looking drop shot into the net on match point. The world number 131, on her second appearance in the main draw of a Grand Slam, emulates Belgium's Filip Dewulf, the only qualifier in either of the singles draws since tennis turned professional in 1968 to make it to the last four at Roland Garros, in 1997.

"It's a little bit difficult for me to speak after the match, thank you everybody for your support, I'm very very happy," Podoroska said on court Philippe Chatrier.

"We did a very good job with my coaches during quarantine. That's why I'm here today."

Svitolina, one of the pre-tournament favourites after winning the Strasbourg International last month, was on the backfoot throughout, failing at the last-eight stage for the third time at the claycourt Grand Slam. 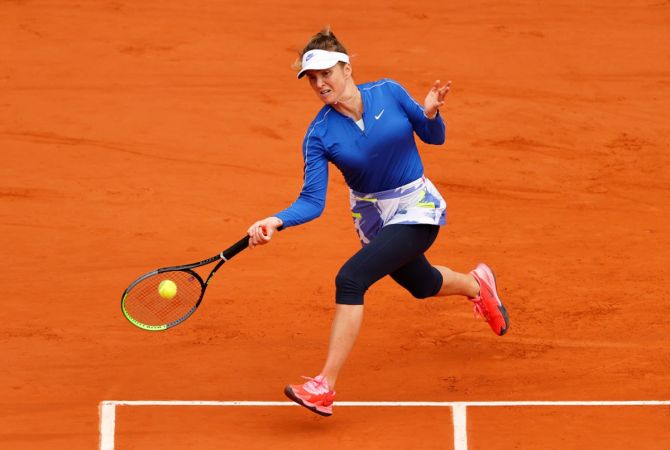 IMAGE: Ukraine's Elina Svitolina was on the backfoot throughout, failing at the last-eight stage for the third time at the claycourt Grand Slam.. Photograph: Clive Brunskill/Getty Images

Should Trevisan prevail in her quarter-final, it would ensure a qualifier plays in the final of a Grand Slam for the first time in the Open era.

Since 1968, only Alexandra Stevenson at Wimbledon in 1999 and Christine Dorey at the 1978 Australian Open had made it to the semi-finals at a major prior to Podoroska. Both of them failed to go one step further.

Coming into Tuesday's match, the 23-year-old Podoroska had won seven matches in a row at Roland Garros, and she kept that momentum going against Svitolina.

The Ukrainian broke her serve in the first game, but then Podoroska turned on the engine and bagged five games in a row to move to 5-1.

Having converted all of her four break points while Svitolina converted only two of six, Podoroska found herself one set up after 37 minutes.

Perfectly mixing power and a gentle touch with drop shots, Podoroska proved too skilful for Svitolina, who looked nothing like the player who reached the semi-finals at Wimbledon and the US Open last year.

Six consecutive games went against serve in the second set until Podoroska held for 5-4 before wrapping it up on Svitolina's serve on her second match point with a forehand winner. Unseeded Danielle Collins battled past Tunisian Ons Jabeur 6-4, 4-6, 6-4  to reach the French Open quarter-finals for the first time in her career.

World number 57 Collins raised her level after the opening nine games of the first set went with serve, when the American broke to edge ahead in the contest as Jabeur made an unforced error from the back of the court.

The big-hitting 26-year-old then raced to a 3-0 lead in the second set, showing the craftiness more commonly associated with her opponent to pull off a superb drop shot in the second game as Jabeur appeared to wilt on Court Philippe Chatrier.

But the Tunisian, who became the first Arab woman to reach the Roland Garros last 16 by beating eighth seed Aryna Sabalenka, regained focus to win the next five games in a row before dragging the match into a deciding set. In complete contrast to the opener, both players traded breaks freely at the start of the decider before Collins came back from 0-40 to hold for 3-2 and staved off a late comeback attempt to seal the win.

She will face Australian Open champion Sofia Kenin next, after the fourth-seeded American recovered from a wobbly start to beat Frenchwoman Fiona Ferro 2-6 6-2 6-1 in their last 16 encounter on Monday.