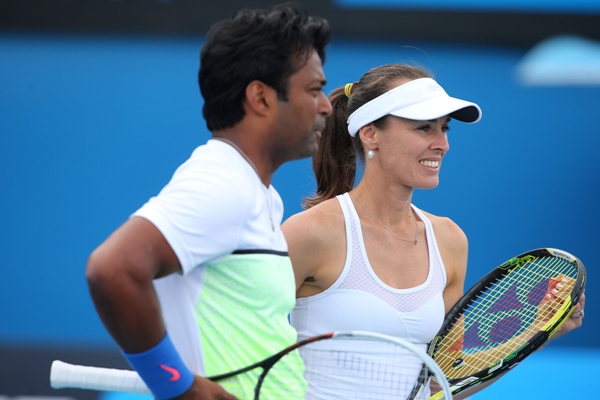 India's Leander Paes and his Swiss partner Martina Hingis moved a step closer to their first French Open crown together as they breezed into the mixed doubles quarter-finals after dispatching fourth seeds Yaroslav Shvedova and Florin Mergea.

Unseeded Paes and Hingis, who won three Grand Slams together in 2015, erased a one-set deficit to eke out a 2-6, 7-5, 10-6 win over a formidable combination in the rain-hit second round contest.

After losing their serve twice and breaking their rivals once, Paes and Hingis were trailing 2-3 when skies opened up, halting the match.

After play resumed, Paes and Hingis could not win a single game, losing three games in a row to surrender the opening set. The Indo-Swiss had its share of chances but converted only one of the four break chances.

They almost dropped serve in the third game but managed to hold. It was a tight contest from thereon with two pairs locked 5-5. Shvedova and Mergea were serving to force a tie-breaker but Paes and Hingis capitalised on the second break point to drag it to a Super Tie-breaker.

They led 4-1 and then 8-4 before clinching the issue on their third match point.

They now await winners of the second round match between top seeds Hao-Ching Chan and Jamie Murray and Daria Gavrilova and John Peers.