Paes-Bhupathi rally into second round

The Indian duo of Leander Paes and Mahesh Bhupathi rallied from a set down to score a 2-6, 6-3, 6-2 victory over the German pair of Tommy Haas and Philipp Petzschner in the first round of the French Open men's doubles competition, in Paris on Thursday.

The 'Indian Express' pair, gunning for their third French Open crown together, needed 96 minutes to quell the Germans' challenge.

The third seeded Indians got just 33 percent of their second serves right in the first set, against the German pair's 60 per cent.

They committed two double-faults, while Haas-Petzschner converted both their break-points to win the set comfortably.

However, Paes and Bhupathi got their act together in the second set and converted one of their four break-points to prevail 6-3.

In the decider, the Indian pair, champions in 1999 and 2001, put up a clinical performance to outsmart Haas and Petzschner and run away with the set and the match.

In the next round, Paes and Bhupathi meet the Australian duo of Ashley Fisher and Stephen Huss.

In the mixed doubles, Paes and Bhupathi advanced to the second round with their respective partners. Paes and Iveta Benesova of Czech Republic, seeded seventh, scored a first round 6-3, 6-1 thrashing of the duo of Aravane Rezai of France and Grigor Dimitrov of Bulgaria.

Seeded fifth, Bhupathi and Jie Zheng of China had to toiled hard in their 6-7, 6-0. 10-8 win over Petra Kvitova of Czech Republic and Sergiy Stakhovsky of Ukraine.

Meanwhile, India's Somdev Devvarman and his Chinese Taipei partner Yen-Hsun Lu failed to clear the first hurdle in the men's doubles, going down 3-6, 4-6 to Feliciano Lopez and Marcel Granollers of Spain.

Somdev had earlier lost to world No 37 Ivan Ljubicic of Croatia in the first round of the men's singles event. 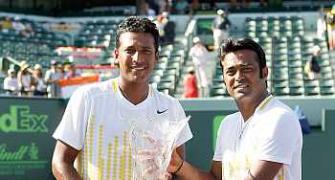 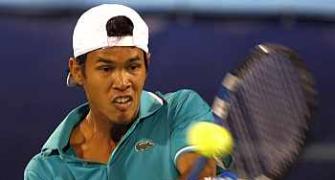 Federer eases past Somdev in Dubai