Sania Mirza stormed into her first Grand Slam doubles final. She and her Russian partner Elena Vesnina defeated the American duo of Liezel Huber and Lisa Raymond in a thrilling three-setter in the semi-finals of the French Open in Paris on Wednesday.

Seeded seventh in the tournament, Sania and Vesnina beat their fourth seeded opponents 6-3, 2-6, 6-4 in a 105 minute contest at the Roland Garros.

In the final, the Indo-Russian combo will face the unseeded Czech duo of Andrea Hlavackova and Lucie Hradecka, who beat the third seeded pair of Vania King of the United States and Yaroslava Shvedova of Kazakhstan 6-3, 6-3 in the other semi-final.

This is Sania's third Grand Slam final appearance -- the first two being in the mixed doubles at the Australian Open. 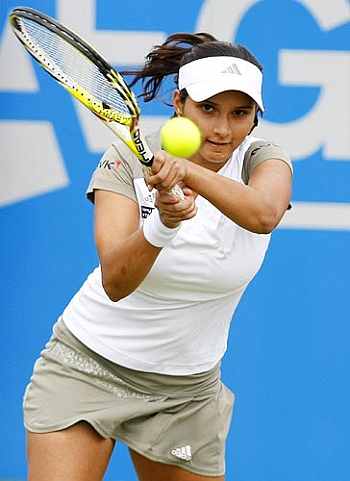 Sania and compatriot Mahesh Bhupathi won the Australian Open mixed doubles in 2009, while they were losing finalists in the same Grand Slam tournament in 2008.

Sania, who paired with Vesnina only in February, was strapped just below her left knee but did not show any apparent problem as she played some superb winning shots across the net.

She and Vesnina broke early to race to 4-1 before pocketing the first set 6-3 in 30 minutes.

The second set was a longer affair, with both sides breaking serve, though Sania and Vesnina were broken thrice in their before losing 2-6, in 38 minutes.

In the deciding set, Sania and Vesnina broke in the first game itself and held to take a 2-0 lead.

Huber and Raymond held their next serve but Sania and Vesnina maintained their two-point lead at 3-1, winning the fourth game.

But in the sixth game they were broken and the score was level 3-3.

The Indo-Russian pair responded in a superb fashion by breaking back in the seventh game to surge ahead 4-3 before holding serve to make it 5-3.

Huber and Raymond held serve in the ninth game to make it 4-5, but Sania and Vesnina held their nerves to take the third set 6-4 in 37 minutes and reach their first Grand Slam final together.

Since first pairing in February, Sania and Vesnina won two titles -- at Indian Wells in March and in Charleston in April.