Sania Mirza and and her partner Elena Vesnina shocked top seeds Gisela Dulko and Flavia Pennetta 6-0, 7-5 to reach the women's doubles semi-finals in the French Open, on Monday.

The seventh seed Indo-Russian pair wrapped up the quarter-final clash in one hour and six minutes after blanking the Argentine-Italian duo in the first set.

This is for the first time that Sania has reached the women's doubles semi-finals in a Grand Slam event.

The quarter-final appearances in the 2007 US Open and 2008 Wimbledon were her best performances so far at the big stage.

They will take on the winner of the Liezel Huber/Lisa Raymond vs Victoria Azarenka/Maria Kirilenko clash in the semifinals.

In another pleasing result for India, Davis Cupper Rohan Bopanna and Aisam-ul-haq Qureshi advanced to the men's doubles quarter-finals with a 6-3, 7-5 win over Andrey Golubev and Denis Istomin earlier in the day.

The fifth seed Indo-Pak pair beat the Kazak-Uzbek combination in one hour and nine minutes in the third round.

It will be the third quarter-final appearance in the last four Grand Slams for Bopanna and Qureshi.

They will now clash against top seeded American twins Mike and Bob Bryan, who defeated Russia's Teymuraz Gabashvili and Mikhail Kukushkin of Kazakhstan 7-6 (6), 7-5 in their pre-quarterfinal match.

Bopanna and Qureshi had lost to Bryan brothers in the US Open final last year.

Bopanna is the only Indian surviving in the men's doubles as the pair of Leander Paes and Mahesh Bhupathi made a shock second round exit.

Another contest of Indian interest would be the mixed doubles quarter-final between Indo-Czech pair of Paes and Iveta Benesova and the top seeded combination of Slovakian Katarina Srebotnik and Serbian Nenad Zimonjic. 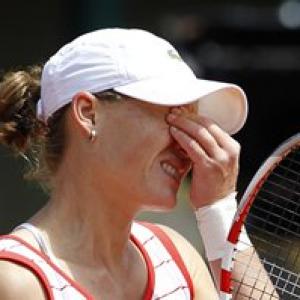