A late Bafetimbi Gomis goal gave Olympique Lyon a 2-1 home win over Toulouse to send the seven-times champions to the top of Ligue 1 on Saturday.

France forward Gomis struck from close range on 72 minutes to give Lyon 17 points from seven games, one point ahead of champions Girondins Bordeaux who host Stade Rennes on Sunday.

Midfielder Moussa Sissoko exploited a blunder by the defence to put Toulouse in front after eight minutes but Lyon levelled through teenage striker Yannis Tafer seven minutes into the second half.

"I want to congratulate the players for the spirit they showed," said Lyon coach Claude Puel, who was without Argentina striker Lisandro Lopez and France defender Jean-Alain Boumsong through injury.

"We had quite a few problems but despite that we managed to fight back to earn a deserved win," Puel told French television channel Canal Plus.

Third-placed Olympique Marseille, on 14 points, suffered their first league defeat this season when they lost 3-2 at Valenciennes.

Seconds later Senegal striker Mamadou Niang was on target for Marseille before defender David Ducourtioux equalised with a diving header in the 29th minute.

"We were not serious enough defensively," said Marseille coach Didier Deschamps. "We led twice but we did not work hard enough and allowed them too much space.

"You can't say Valenciennes didn't deserve to win but my team certainly didn't do what I expect them to."

© Copyright 2020 Reuters Limited. All rights reserved. Republication or redistribution of Reuters content, including by framing or similar means, is expressly prohibited without the prior written consent of Reuters. Reuters shall not be liable for any errors or delays in the content, or for any actions taken in reliance thereon.
Related News: Lyon, Valenciennes, Olympique Marseille, Toulouse, Bafetimbi Gomis
SHARE THIS STORYCOMMENT
Print this article
Lyon prepared for new era without dynamic duo 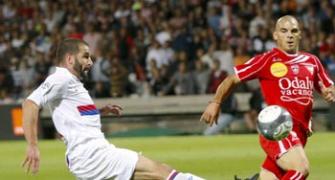