Formula One chief Bernie Ecclestone said on Wednesday he has recommended Singapore as the best place to float the motor racing business, seeking to tap Asian enthusiasm for international sporting brands.

Ecclestone, 81, stressed that he made the proposal, but a decision on any flotation was up to CVC Capital Partners, the private equity company that has owned a majority of the business since 2006.

English soccer champions Manchester United also had plans for a US $1 billion flotation in the southeast Asian city state last year but put them on ice because of market volatility.

The diminutive Ecclestone, a former driver and team boss, has built Formula One (F1) - and with it his estimated $4.2 billion fortune - from a circuit for motoring enthusiasts into a global enterprise that draws more than half a billion TV viewers for its races. 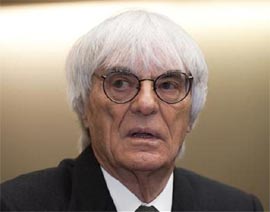 It is banking on further geographical spread to keep its revenues growing, with a return to the United States later this year for a Grand Prix in Texas, after last year's inaugural race in India, and Russia joins the calendar in 2014. It will also race in Bahrain this year, despite continuing unrest, after last year's contest was shelved following a bloody crackdown on pro-democracy protests.

A flotation for F1 has long been mooted, but the issue is made more urgent by the expiry this year of a confidential commercial agreement between the rights holding company and the teams whose cars compete in the 20-race series.

Ecclestone said the flotation plan is not linked to the agreement with the teams and denied reports that Italy's Ferrari, the sport's best known team, and current champions Red Bull could be offered a stake in the business.

CVC, which owns 63.4 percent of F1, would continue to be a long-term holder of the business, and the initial public offering (IPO) option being explored is for only part of the company, a source close to the matter said.

Britain's Sky News has reported that CVC has asked Goldman Sachs to examine a placement of some F1 shares with a new investor as a precursor to a formal Singapore IPO.

The Sky report put a potential valuation of over $10 billion on the business. Goldman Sachs and CVC declined to comment.

A minimum 15 percent float in Singapore would make the deal worth $1.5 billion.

Sources said that Manchester United has not abandoned its plan to list in Singapore but that no decision has been made on the timing.

United has a global fan base estimated at 333 million, including many in Asia who follow the sport via live television.

Among F1 teams, only Williams has floated so far, with their shares listed in Frankfurt since last March. Ferrari president Luca Di Montezemolo said last year that the company has no plans to list but might reconsider in a few years' time.

Singapore, which competes with Hong Kong for international listings, became the venue for the world's first night-time Grand Prix in 2008.

Investor reaction to such a listing could be difficult to gauge as there was plenty of scepticism around Manchester United's business and profitability when the club was preparing for a public float last year.

"The same thing will apply to F1. At the end of the day it depends on their profitability and whether they can generate returns for shareholders," said Ng Kian Teck, lead analyst at SIAS Research in Singapore.

"But F1 has good branding and strong market share, and they are probably one of the few players that could do racing events to their kind of scale. That would probably put them on a better foothold compared to Man U."

The F1 series had annual sales of 1.17 billion euros and employs 200 people, according to the CVC website.

F1's revenue for the current season, which began at the Australian Grand Prix on Sunday, will reach $2 billion for the first time, said industry monitor Formula Money.

In a recent report, Formula Money added that new races in the United States and Russia would help boost income from F1's commercial rights by almost 50 percent to $2.9 billion by 2015.

Under the agreement due to be renegotiated, the teams are believed to get half of F1's underlying core profit in prize money. Ferrari gets an additional payment in recognition of its status as the oldest and best known team.

The Formula One teams are no longer as united as they were, with only seven of the 12 remaining as members of the body that all of them had formed to act as their mouthpiece in negotiations with the commercial rights holder and governing International Automobile Federation, the other parties to the Concorde Agreement.

The FIA, now run by former Ferrari principal Jean Todt, ultimately owns the commercial rights but signed them over to Ecclestone's Formula One Management in a 100-year deal in 2001 as part of a separation of commercial and regulatory activities. The Paris-based body still has a say in any transfer of ownership of the commercial rights, however.

Ecclestone did not travel to the season-opening Australian Grand Prix but team principals in Melbourne said talks on a new agreement are progressing.

"We are in discussions, and the discussions are going on in the right way. But there is no more than that at the moment," said Ferrari team boss Stefano Domenicali.