Starting eight on the grid, Sutil passed both McLaren's Jenson Button (6th) and Ferrari's Fernando Alonso (7th) with opportunistic overtaking maneuvres at the hairpin en route to his fifth place finish to earn vital 10 points for his side. 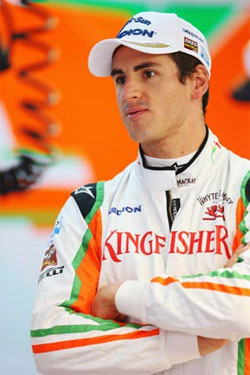 His teammate Di Resta too had a good day in office -- starting 17th, he moved up whopping eight places -- to drive home his VJM06 inside the top 10 bracket and collected two points in the process.

In a race marred by accidents, red flags and two safety car interventions, Rosberg drove flawlessly to claim only the second win of his career.

Reigning world champion Sebastian Vettel of Germany was second ahead of his teammate Mark Webber to ensure a two-three finish for Red Bull. Mercedes' Lewis Hamilton claimed the fourth position.

The red flag came out with 30 laps to go in the 78-lap race when Williams' Pastor Maldonado was pushed into the wall by Max Chilton of Marussia.

"Fifth place feels fantastic. It's just the result we needed and I'm very happy right now. The car felt very good and we made the most of the chances that came our way," an elated Sutil said after the race.

"It was difficult to move forward in the first half of the race when I was stuck in the train of cars, but the red flag opened up some more opportunities. It meant that everybody was on the same sprint strategy until the end of the race.

"I noticed that the hairpin was an area where there was a chance to overtake so I tried it with Jenson and it worked. Then I did the same with Fernando and it worked once again. So I think I showed that overtaking is possible in Monaco. The team did an excellent job all weekend and we definitely deserved this result today," the German added.

Di Resta, who finished ninth, said, "Given where we started we went with an aggressive strategy and it probably would have paid off without the safety cars.

"The pace was strong, but I was stuck behind lots of traffic in the early part of the race. I managed to pass a few cars going into turn one, but towards the end of the race the cars were more bunched up and it was not so easy. I was stuck behind Vergne after the restart and I had one good chance to overtake, but he defended very well," he said.

"Fortunately with the cars ahead battling and making contact I made up some positions and scored a couple of points. So after the disappointment of yesterday, the boys did a great job and it's good to continue my run of finishes in the points."

Team Principal and Managing Director, Vijay Mallya added, "A very eventful Monaco Grand Prix and I am delighted to see both Sahara Force Indias come home safely in the points.

"With Adrian's fifth place and ninth place for Paul, we have added 12 points to our tally and strengthened our hold on fifth position in the championship. Adrian's drive was superb as he showed great speed and patience all afternoon."