Lewis Hamilton grabbed McLaren's 150th Formula One pole on Saturday in a Spanish Grand Prix qualifying that left him well-placed to become the fifth different winner in five races. 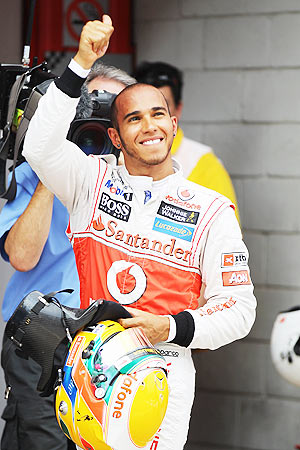 Hamilton's pole was his third of the year but celebrations were short-lived as his team told the Briton to stop the car immediately due to an unspecified problem.

"It's a little bit of a worry," said team principal Martin Whitmarsh.

Ferrari's Fernando Alonso secured third spot for his home race, and one that has only once in 21 years been won by a driver starting off the front row, with Frenchman Romain Grosjean alongside for Lotus.

Maldonado, who had rocketed to the fastest time in the second session, was delighted to shake up the order at the front with Williams first front row start since Nico Hulkenberg's surprise pole in Brazil in 2010.

Vettel's Australian team-mate Mark Webber saw his hopes of a third Spanish pole in a row disappear when he failed to make the cut for the final session and qualified 12th.

That was one place behind Hamilton's British team-mate and 2009 champion Jenson Button, who will also be able to change his car's setup with tyres saved for the race.

"I don't know where it went wrong. All day I've struggled with balance," said Button, who had been fastest in Friday practice.

"I thought we would be reasonably competitive and at least get into Q3 (the final session) but that's not the case. I haven't changed that much but struggled with the balance."

At the slow end of the pack, Indian Narain Karthikeyan had his fate left in the hands of race stewards after failing to qualify for HRT with the required lap time.