Hamilton wins in Italy to rein in Rosberg 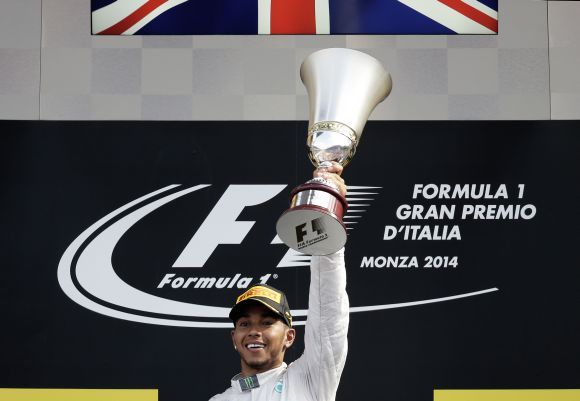 Mercedes Formula One driver Lewis Hamilton of Britain celebrates on the podium on the podium with the trophy at the end of the Italian F1 Grand Prix in Monza . Photograph: Max Rossi/Reuters

Lewis Hamilton battled back from an agonisingly slow start to win the Italian Grand Prix for Mercedes on Sunday and slash team mate Nico Rosberg's Formula One championship lead to 22 points.

Rosberg finished second as dominant Mercedes celebrated their first one-two since Austria in June and seventh in 13 races.

With the sport taking a deep breath as the championship rivals lined up together on the front row, two weeks after they had collided in Belgium, the start provided an immediate sensation.

Hamilton had taken pole position for the first time since May but problems with the car's start mode left him struggling to get away and fourth into the first corner as Rosberg sped away untroubled.

‘It was a difficult race’ 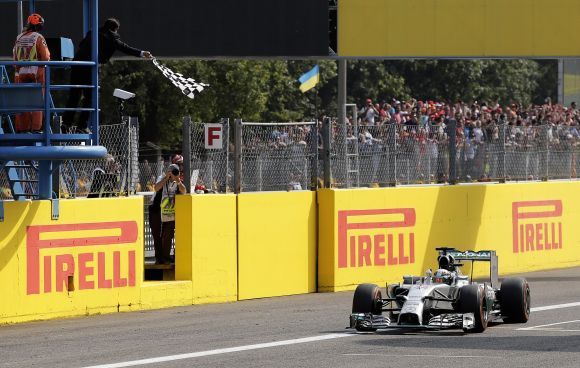 It was the start of a thrilling chase, with the 2008 world champion fighting back and retaking the lead on the 29th of 53 laps when Rosberg missed the first chicane as he had done earlier in the race.

With the German under pressure and driving straight on, slowing and weaving to get back on track, Hamilton seized the lead in the decisive moment of the afternoon.

The two crossed the finish line 3.1 seconds apart, with Hamilton celebrating his first win since Britain in July. It was his fifth of the season and 28th of his career, taking him ahead of triple champion Jackie Stewart in the all-time lists.

"It was a difficult race," said Hamilton. "For whatever reason, at the start the button didn't press which engages the launch sequence.

"For the formation lap it didn't work and when I got to the grid and put it on again, again it didn't work. It was very strange. I've never really had that happen before.

"I tried to pull away as fast as possible and the RPM was all over the place. Fortunately I managed to not lose too many places." Rosberg now has 238 points to Hamilton's 216, with six races remaining after the end of the European part of the season.

Brazilian Felipe Massa finished third for Williams, his first podium appearance since Spain last year with Ferrari, on Brazilian independence day and after the team had announced he was staying for 2015.

The points, at the fastest track on the calendar, meant Williams leapfrogged Ferrari into third place in the constructors' standings.

In the absence of their current Ferrari heroes, the passionate home crowd welcomed their ex-driver's appearance on the podium with cheers as they spilled out in a vast red wave onto the start/finish straight.

Rosberg, blamed by his own team for the second lap Spa collision that led to Hamilton's retirement from that race, was booed for the second grand prix in a row.

Alonso retired from his team's home race on lap 29 Ferrari Formula One driver Fernando Alonso of Spain stops the race as his car breaks down during the Italian F1 Grand Prix. Photograph: Max Rossi/Reuters

Massa's Finnish team mate Valtteri Bottas was fourth following another highly impressive day of overtaking after he had dropped from the second row to 10th at the end of the first lap.

Ferrari's Fernando Alonso retired from his team's home race on lap 29 with a failure in the car's energy recovery system, his first mechanical retirement in 86 races, while Kimi Raikkonen finished ninth.

Until Sunday, Alonso was the only driver to have scored points in every race this season. 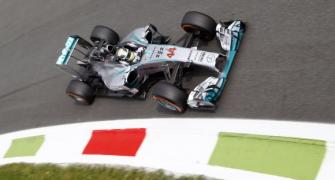 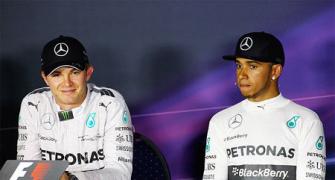 Formula One: Williams confirm Bottas and Massa for 2015