Even after being one of the most awaited events of the year, the first day of the Formula One after-party lacked star glamour with few celebs and no racers attending.

"F1 racers aren't here today cause they have a rule of not partying before the race," said actor Arjun Rampal, who is hosting the after parties on all three days at Jaypee Integrated Sports Complex.

"I am glad that I have got the opportunity to host an event like this. Formula One is a very glamorous sport and we have all the F1 bosses and socialites of Delhi present.

You will see the drivers, Bollywood celebs and Lady Gaga on Sunday," he added.

Rampal, who is the co-owner of Lap, which is organizing the after-parties for F1, assured that Sunday's party will be a much grander event with Lady Gaga's performance and Bollywood's A-listers like Shah Rukh Khan, Hrithik Roshan and Sonam Kapoor attending. 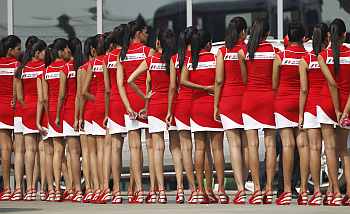 Friday night's bash happened to be the 81st birthday party of Formula One CEO Bernie Ecclestone, who was accompanied by Rampal on the red carpet. "All the drivers are very happy with the tracks. And I think India has a great potential and we can sustain the momentum by frequent participation," said Ecclestone.

With none of the F1 racers present at the event except Narain Karthikeyan, who left the venue within half an hour, others attending Friday night's bash were host Arjun Rampal, Sussanne Roshan, Chunky Pandey, Priya Sachdev, Rahul Dev, actress Shweta Salve, designers Rohit Bal, Tarun Thailiani and JJ Vallaya.

Internationally known DJ Roger Sanchez played for the night and looked dapper in a T-shirt, jeans and a cap.

"I am excited to play here and am looking forward to the crowd inside. F1 is my favourite and I am happy to be here. I have performed in India before and just love the vibe in here. There won't be Bollywood music tonight as I didn't get enough time to listen to the tracks," Sanchez said. 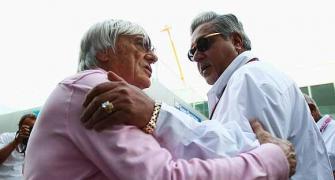 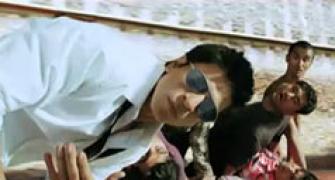 3D Review: Ra.One could have been so much more
Ecclestone has no safety worries for Indian GP 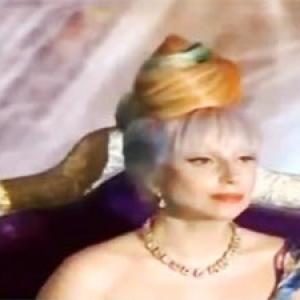 Lady Gaga: The sights in India are beautiful