Paul Di Resta recorded his second best performance of the season by earning four points with a eighth-place finish for Force India while Adrian Sutil could not finish the action-filled Italian Grand Prix, in which nine of the 24 cars crashed out.

This is only the fourth points-finish result for Resta in the season, with his best coming at July's Hungarian GP, where he had finished seventh to take six points.

However, it was disappointing result for Sutil, who suffered his second retirement of 2011 calender as his race was finished by lap nine.

The drama happened right in the opening lap of the race when Hispania's Vitantonio Liuzzi lost control over his car while attempting to clear the traffic at the back and slid after going off the track.

He went right, left, right and again left and then slipped back to track and rammed into other cars, forcing multiple retirements. 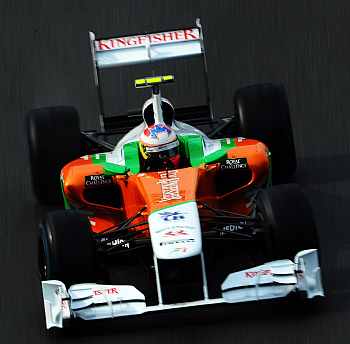 Safety car was out in and the race had lost five cars -- Liuzzi and his teammate Daniel Ricciardo, Renault's Vitali Petrov, Mercedes' Nico Rosberg and Virgin's Jerome d'Ambrosio.

Amidst all the chaos, Resta, who had started 11th on the grid moved into top-10, held the eight position for sometime but soon Massa and Toro Rosso's Jaime Alguersuari overtook him.

The Scott made his way back to top-10 by lap 20, having gone to pits once. Resta kept moving in and out of the top-10 throughout the race but eventually managed to finish in the points bracket.