Force India, co-owned by Vijay Mallya, is set to sell a minority stake in the Formula One team to Sahara Group, which also sponsors the national cricket team, a source with knowledge of the deal told Reuters on Wednesday.

Mallya and Sahara Chairman Subrata Roy are due to hold a joint news conference later on Wednesday, but the agenda was not known and spokesmen for both companies declined to comment on the stake sale.

Force India was formed in 2007 when a consortium led by Mallya and Dutch entrepreneur Michiel Mol bought the loss-making Spyker Formula One team and later renamed it Force India.

India is set to host its maiden Grand Prix on Oct. 30 at the 120,000-capacity circuit on the outskirts of Delhi.

Some media reports last week said Mallya planned to sell the team to the Sahara group, but this was denied by the liquor and aviation baron. 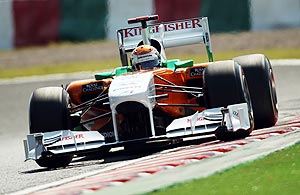 "As Team Principal, I will continue to run the team and I have no plans whatsoever to exit," he had said.

Mallya has a profitable liquor business, but is facing rough weather in aviation.

His Kingfisher airline, India's second-largest private airline, which has never reported a profit, recently announced plans to exit the low-cost part of the airline business and focus on the premium model to reduce debt.

The auditors of Kingfisher have said that the firm needs extra cash as the airline struggles to survive in a challenging market.