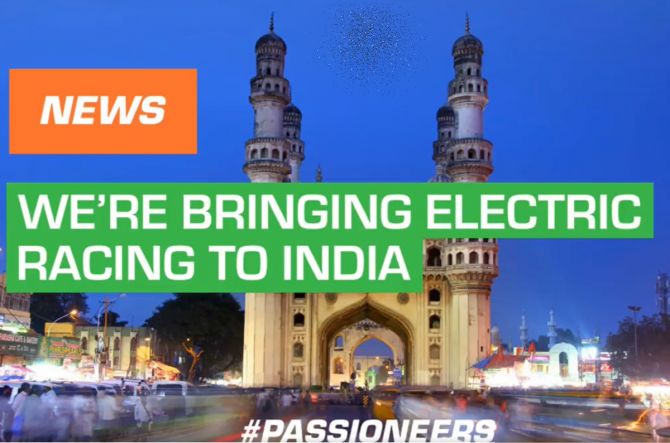 Formula E will make its way to India for the first time ever with a race scheduled to be held in Hyderabad on February 11 next year, the organisers have confirmed.

The race in Hyderabad will be the first time a major international racing event is held in the country since the Formula 1 Indian Grand Prix in October 2013 at the Buddh International Circuit.

Alongside India, Brazil will also welcome the E-Prix for the first time on March 25 as the Formula E and FIA released the provisional calendar for the upcoming ninth season (2022-23).

"Two major motorsport fanbases will welcome E-Prix for the first time. Round 4 of the championship will be held in Hyderabad, India, on 11 February, while fans in Brazil will see the Sao Paulo E-Prix on 25 March for Round 7," a media release stated.

Earlier this year, the Telangana government and Formula E officials had signed a Letter of Intent (LoI) in Hyderabad to host the race.

The Telangana government intends to make the state a hub for EV vehicles and the Formula E race will go a long way in helping it achieve that goal.

The race should also provide a big boost to Indian motorsports which has been in dire need of a high-profile event since Formula 1 was scrapped after three seasons.

Alberto Longo, Co-Founder and Chief Championship Officer, Formula E said: "The Season 9 calendar of the ABB FIA Formula E World Championship is our most expansive and dynamic racing schedule yet and I cannot wait to get started."

"We will continue to push the international boundaries of all-electric street racing with E-Prix in Hyderabad and Sao Paulo, while maintaining the hugely-popular races in Diriyah, Mexico City, Berlin, Monaco, Rome and London with Jakarta and Seoul now established on the calendar."

"We are also working hard to include Cape Town and a race in the USA when the provisional calendar is updated later this year."

Berlin remains the only city to host an E-Prix in all nine seasons of the championship, while Seoul and Jakarta will see Formula E return following inaugural races this season.

Jakarta will host an expanded double-header of races next season.

Diriyah in Saudi Arabia will host the popular double-header of night races on January 27 and 28. While Monaco, Rome and London complete the schedule of named races.

The FIA sanctioned world championship has grown rapidly over the years and has presence of the world's leading auto makers including Mercedes, Porsche, Nissan and India's Mahindra Racing, which has been part of the all electric series since its inception back in 2014.

Karun Chandhok is the only Indian driver to have raced in the competition.

The race calendar mainly consists of makeshift street circuits which are public roads on other days.