Brazil ended their home World Cup to a cacophony of boos on Saturday as the defensive errors that crushed their bid for a sixth title resurfaced in a shoddy 3-0 loss to the Netherlands in the third-place playoff match.

Central defenders Thiago Silva and David Luiz were guilty of early mistakes as the Dutch scored twice in 16 minutes, sparking fears of a repeat of the 7-1 humiliation suffered in their record World Cup loss to Germany in the semi-finals on Tuesday.

That defeat was Brazil's first competitive loss at home in 39 years and brought about calls for widespread changes, with coach Luiz Felipe Scolari greeted with heavy boos when his name was read out before the kickoff in Brasilia.

Scolari made six changes to his team to face the Netherlands in a bid to restore some pride after Tuesday's embarrassment but it was returning captain Thiago Silva, his loyal captain, who was to blame for the opening goal in the third minute.

The defender was fortunate to only receive a yellow card from Algerian referee Djamel Haimoudi for pulling back winger Arjen Robben who was put through on goal after 90 seconds.

The Brazil skipper was clearly the last man, although the offense appeared to occur just outside the penalty area.

With the home fans watching in disbelief, Van Persie stepped up to smash in the penalty as the home fans in the stadium and throughout the Brazilian capital fell into near silence.

They found their negative voices, though, shortly after as Thiago Silva's defensive partner Luiz sent a header under no pressure to Daley Blind, who had time to take two touches near the penalty spot before firing home in the 16th minute.

It was the ninth goal Brazil had conceded in 95 traumatic minutes and the anger again came pouring down from the terraces, with boos ringing out as the once proud hosts were left embarrassed by the shambolic efforts of the beloved Selecao.

Scolari made changes at the interval as Brazil tried to find a way back into the game but they only found more misery as Oscar became the first player to be booked for diving at the tournament after trying to win a penalty with 20 minutes left.

The hosts did enjoy greater possession in the second period but the Dutch always threatened on the break and they completed the rout in stoppage time when Georginio Wijnaldum was left unmarked to turn in Daryl Janmaat's cross. 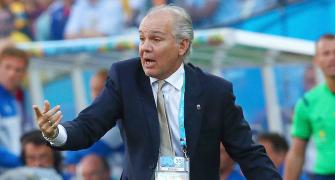 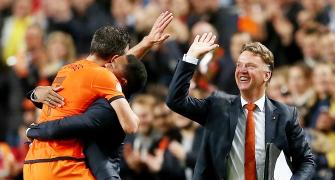 Will Van Gaal's wishful thinking work again for the Dutch? 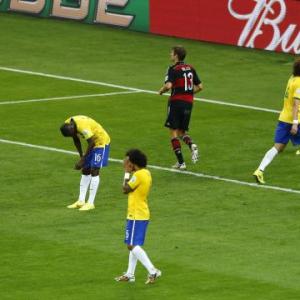 The death of the yellow jersey