News
Business
Movies
Sports
Cricket
Get Ahead
Money Tips
Shopping
Sign in  |  Create a Rediffmail account
Rediff.com  » Sports » Portugal win over Ghana in vain as both sides bow out

Portugal win over Ghana in vain as both sides bow out An own goal by John Boye and a late strike by Cristiano Ronaldo gave Portugal a 2-1 victory over incident-hit Ghana on Thursday, but it was not enough to make the second round as both sides exited the World Cup.

Portugal finished level on four points with the United States in Group G but the Americans advanced to the last 16 courtesy of a better goal difference despite their 1-0 loss to group winners Germany in Recife.

Boye's poor attempt at a first half clearance summed up a disappointing match between two teams who needed big victories in the Brazilian capital to have a chance of advancing.

The defender swiped at a 31st minute cross from Portuguese full-back Miguel Veloso which hit his knee and then the crossbar before nestling in the back of the net.

The goal came after a Ghana break ended when Bahrain official Nawaf Shukralla accidentally blocked an attempted pass, handing possession to the Portuguese who went up field and scored.

The Ghanaians improved after the break and striker Asamoah Gyan headed them level at the back post after a brilliant cross with the outside of his foot by Kwadwo Asamoah in the 57th minute.

Gyan then turned provider, putting in another ball from the left for an unmarked Abdul Majeed Waris moments later but the striker could only steer his header wide from six yards out.

The wasted effort proved costly as Portugal skipper and World Player-of-the-Year Ronaldo smashed his side ahead in the 80th minute after Ghana goalkeeper Fatawu Dauda flapped at a high ball, sending it straight to the Real Madrid forward.

Ronaldo should have had another minutes later but Dauda was on hand to parry the forward's side footed effort from close range, with the keeper also blocking an effort from the skipper in the dying stages.

The World Cup exit completed a miserable two days for the Africans who were embroiled in a pay row and kicked out midfielders Kevin-Prince Boateng and Sulley Muntari for ill-discipline hours before Thursday's kick-off.

Image: Ghana goalkeeper Fatawu Dauda makes a save off a header at goal by Cristiano Ronaldo of Portugal

© Copyright 2020 Reuters Limited. All rights reserved. Republication or redistribution of Reuters content, including by framing or similar means, is expressly prohibited without the prior written consent of Reuters. Reuters shall not be liable for any errors or delays in the content, or for any actions taken in reliance thereon.
Related News: Ghana, Germany, John Boye, Fatawu Dauda, Cristiano Ronaldo
SHARE THIS STORYCOMMENT
Print this article 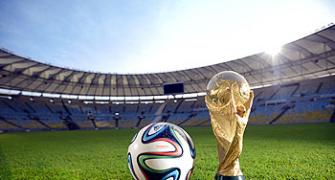 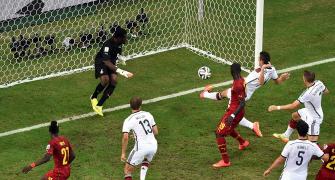 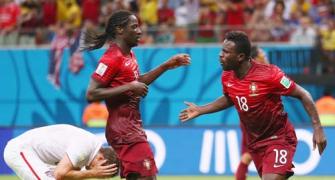 Hope floats for Portugal after last gasp draw with the US 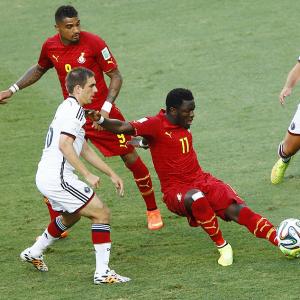 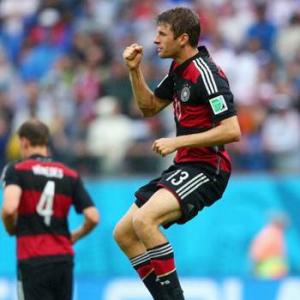 Germany beat US, but both go through