Uruguay look to fend off Mexican flair in crucial tie

Mexico's attacking flair has been clearly on display at this World Cup so all eyes will be on their tactics against Uruguay on Tuesday when a point will see them into the last 16 and a possible clash with Argentina. 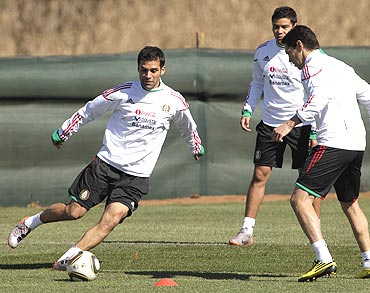 The two Latin American sides in Group A are separated on goal difference so Mexico's only hope of finishing top - and in all probability avoiding Diego Maradona's rampaging troops who are set to win Group B - is to go for the win.

"I hope we can impose our style against Uruguay," coach Javier Aguirre said last week, wary of the threats posed by the South Americans who have a quality forward pairing of Diego Forlan and Luis Suarez.

Whatever the many permutations, Mexico defender Ricardo Osorio was in no doubt the match would light up the tournament, so far being played in a largely defensive manner.

"You'll see some good football, which is what has been missing. What we've seen until now is stingy football," Osorio told a news conference on Saturday.

"Before coming to the World Cup I thought our strongest Group A opponent would be Mexico," Perez said on Saturday.

Mexico possess pace in abundance all over the pitch but will be without lively forward Carlos Vela due to injury and spritely defender Efrain Juarez, suspended after two yellow cards.

Uruguay coach Oscar Tabarez said on Sunday he will field the same team that started against South Africa for what he knows will be a step up in opposition. Mexico have lost only three of 17 matches against Uruguay.

"We know very well the qualities of Mexican football. They have quick and skilful players, all things we should bear in mind so they don't surprise us."

© Copyright 2021 Reuters Limited. All rights reserved. Republication or redistribution of Reuters content, including by framing or similar means, is expressly prohibited without the prior written consent of Reuters. Reuters shall not be liable for any errors or delays in the content, or for any actions taken in reliance thereon.
Related News: Mexico, Diego Perez, Ricardo Osorio, Uruguay, Oscar Tabarez
SHARE THIS STORYCOMMENT
Print this article 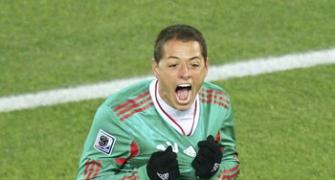 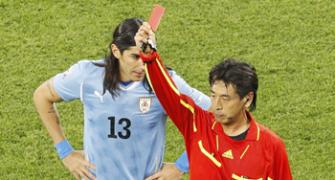 Lodeiro sent off in dull 0-0 draw 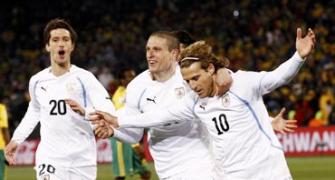 Images: Uruguay superior in all departments Inspired SA, Mexico to spice up proceedings on opening day