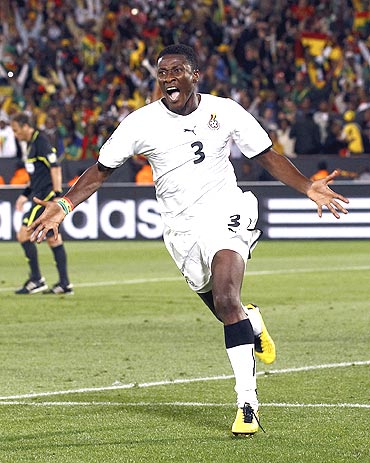 An 85th minute penalty from Asamoah Gyan gave Ghana a 1-0 victory over Serbia in World Cup Group D on Sunday - providing Africa with their first win in the tournament.

Ghana's fans produced a truly African atmosphere against Serbia at the Loftus Versfeld stadium on Sunday but the game did not truly come alive until Serbia had Aleksander Lukovic sent off for a second bookable offence in the 74th minute.

The Serbs best chances to win the game came after the dismissal when Milos Krasic had a fine effort palmed over and then Nemenja Vidic headed over from the corner.

Branislav Ivanovic then went close with a long-range effort after bursting through from the right but Serbia may wish they had shown such adventure and aggression a little earlier.

A handball by substitute Zdravko Kuzmanovic led to the spot kick which Gyan, who had missed several chances, converted with confidence.

Despite the absence of their injured inspiration Michael Essien in midfield, Ghana enjoyed a lively start and Gyan went close twice with a free-kick which flashed over the bar and a headed opportunity where he failed to make good contact.