A - Africa. The continent's first World Cup was embraced off the pitch but on it, where only Ghana of the record six teams taking part got beyond the group stage, it was a massive disappointment.

B - Bavaria. How many people had heard of the little Dutch brewery before it was handed surely the greatest piece of free publicity ever afforded a company? FIFA's heavy-handed arrest of a group of models wearing orange dresses -- from among a crowd of 20,000 orange-clad fans -- was the most spectacular own goal of the tournament.

C - Convoy. Not since the Great Trek of the 1830s have so many Dutchmen been on the move in South Africa. The remarkable convoy of orange vehicles that set off from Amsterdam in April brought vivid colour to the country. Even more remarkable is the fact that the whole lot of them went home on a pre-booked ship during the week and the occupants will watch the final in the Netherlands.

D - Dunga. A quite incredible display of touchline petulance from Brazil's coach from start to finish. Just when his team were rocking against Netherlands and needed a calm hand on the tiller, Dunga preferred to rant and rave like the most demented fan.

E - Europe. Stories of the continent's demise proved premature as the three European quarter-finalists all became semi-finalists and, for the second successive tournament, two of them will contest the final.

F - Faking it. Chile's Arturo Vidal and Kader Keita of Ivory Coast were guilty of appalling pretence to induce red cards for opponents for imaginary blows to the face. Even though the whole world could see, via TV replays, that the offences did not happen the actors got away scot-free while the real "victims" still had to serve suspensions.

G - Giraffe. One of the rare nods to the location as the designers incorporated giraffe-shapes into the supports for Nelspruit's Mbombela Stadium.

H - Hand of God II. The same photo of Luis Suarez's last-gasp handball to deny Ghana a place in the quarter-finals was captioned "cheat" throughout Africa and "hero" in Uruguay.

I - In-fighting. France, England, Cameroon, South Africa and no doubt many others suffered from internal tensions with coaches criticised and petulant players objecting. This is usually the favoured approach of the Netherlands but this time, bar the odd Robin van Persie dummy-spit, they have been a harmonious unit -- and look where it got them.

J - Jabulani. The ball with a mind of its own. FIFA's insistence of developing a new ball for every tournament backfired with adidas's latest offering delivering the properties of a child's beach ball.

K - Kingson. Richard, third choice at Wigan Athletic but arguably the best goalkeeper of the tournament as he kept Ghana on course with a series of saves with his legs and feet.

L - Linesmen. Despite the high-profile blunders that cost England and Mexico dear, the standard of linesmanship was generally superb with their split-second decisions on the ever-more complex offside rule invariably proved correct by myriad TV replays.

M - Maradona. Diego was the biggest personality of the tournament. With his beard, snazzy suit and heart-on-the-sleeve touchline theatrics he managed as a coach to emulate his role as a player by always being the centre of attention. Just to prove he can still walk the walk, he organised a halfway line hit-the-bar competition for his players in a public training session and duly made contact with his first attempt.

N - Name. a new one on the trophy. Eighty years, 19 tournaments and, until Sunday, only seven names on the winners list. Either Spain or Netherlands will be a worthy addition.

P - Paul. An unlikely name for an octopus but it was an unlikely sub-plot as the German-based cephalopod proved an uncanny predictor of results. When it went for Spain ahead of the semi-final Germany fell into a depression, all the more so when it was proved right again.

Q - Questions. Many thousands get asked at the hundreds of news conferences held during the tournament. Some induced deep and meaningful insight, others were brusquely brushed away while the odd one produced a bemused silence, such as this from a female Chinese TV journalist ahead of Portugal's game against North Korea: "Hello Mr Ronaldo, I have read that you have not played very well for Portugal for nearly two years and that you cannot score a goal. Now that Lionel Messi has scored (he had not), will you score a goal tomorrow?"

R - Revolution. Another French one and heads rolled again. This time it was the Federation boss who faced the metaphorical guillotine after the players revolted in support of Nicolas Anelka after the striker abused departing coach Raymond Domenech and refused to apologise. The fallout continues.

S - Sneijder, Wesley. Italian league and Cup double, Champions League title, five goals at the World Cup, four man-of-the-match performances -- just one to go for the man making Netherlands tick to cap a year of achievement beyond anyone's wildest dreams. He even scored with a header.

T - Tiger. Allegedly spotted by Paris Hilton -- according to her "tweets" -- while visiting a South African game reserve.

U - Upsets. Italy and France, the winners and runners-up from 2006, not only went out in the first round but both finished bottom of their groups -- an astonishing turnaround for two of the game's superpowers.

V - Vuvuzela. It could have been for violence but there was barely any as the pre-tournament horror stories proved largely unfounded. Violence to the ears however, was relentless thanks to the Vuvuzela. African-made it may be but its relentless din succeeded in destroying any reflection of the state of the game via the usual crowd noise and created a surreal atmosphere.

W - "Wembley Goal". It took 44 years but Germany finally got revenge for Geoff Hurst's "was it over the line?" goal in the 1966 final. Such goals have since been christened "Wembley goals" by Germans. Frank Lampard's shot was just about the only memorable contribution made by England but at least shook FIFA out of its refusal to investigate goalline technology.

X - Xavi, or should it be Xabi Alonso? Both midfield maestros refused to wilt under pressure, maintaining their astonishing pass-completion rate even when it seemed to be taking Spain nowhere. In the end, the gaps always appeared.

Y - Yellow. The colours of Bafana Bafana were ubiquitous throughout South Africa as the fans turned out in huge numbers to back their nation, particularly at the Fan Zones, one of the biggest successes of the tournament.

Z - The row of seats most of Lionel Messi's goal attempts ended up in.

© Copyright 2020 Reuters Limited. All rights reserved. Republication or redistribution of Reuters content, including by framing or similar means, is expressly prohibited without the prior written consent of Reuters. Reuters shall not be liable for any errors or delays in the content, or for any actions taken in reliance thereon.
Related News: Lionel Messi, FIFA, Ghana, South Africa, Netherlands
SHARE THIS STORYCOMMENT
Print this article 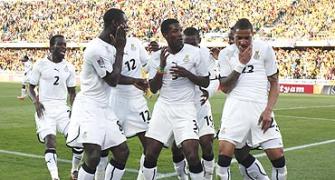 Only South Africa shake it like me: Milla
Fit Muntari could give Ghana a boost 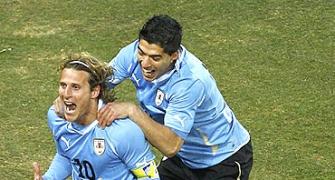 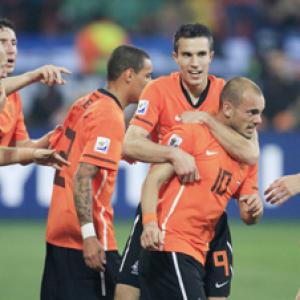 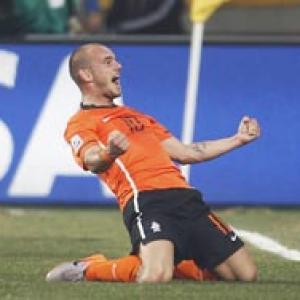