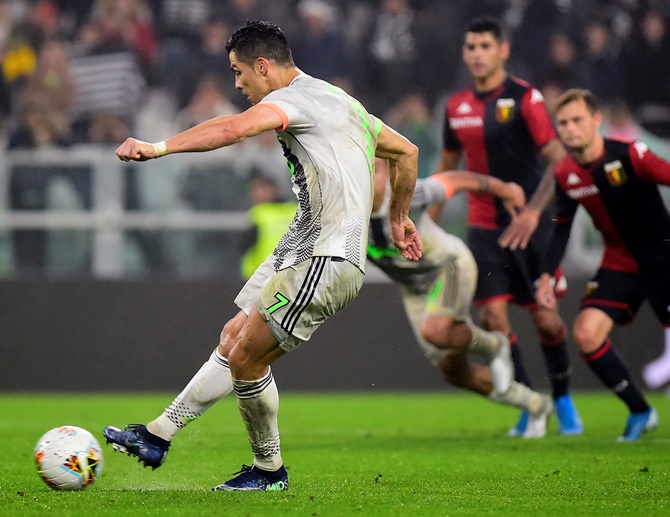 Cristiano Ronaldo controversially won and then converted a stoppage-time penalty, seconds after having a goal chalked off for offside, as Juventus finally broke down 10-man Genoa to win 2-1 and go back to the top of Serie A on Wednesday.

Ronaldo went down under a challenge from Antonio Sanabria and, although their was minimal contact if any at all, the referee pointed to the spot and the VAR officials confirmed the decision with a silent check.

The Portuguese forward then fired in the penalty in the sixth minute of stoppage time.

It was rough justice on 17th-placed Genoa who played with 10 men from the 51st minute when Francesco Cassata was harshly given a second yellow card for tugging Paulo Dybala's shirt.

Juventus, still unbeaten in all competitions under coach Maurizio Sarri, have 26 points from 10 games, one ahead of Inter Milan who beat Brescia 2-1 on Tuesday.

"We suffered a lot but we were the rightful winners. We created so many chances and deserved this win," said Ronaldo.

"We got a bit anxious as the game we went because we needed the win but we kept on trying until the end."

Genoa coach Thiago Motta said he would sleep well despite the defeat. "We played them on level terms until the end which isn't easy here in Turin," he said. "I don't judge referees but I can say he was really severe with us."

Juventus went ahead in the 35th minute. A corner was swung in from the left and defender Leonardo Bonucci got in front of Genoa goalkeeper Ionut Radu to score with a glancing header at the near post.

Genoa levelled within five minutes after Alex Sandro lost possession on the edge of the area. The ball was passed to Christian Kouame who mis-kicked completely but his shot hit his standing leg and flew past a wrong-footed Gianluigi Buffon.

The game veered in Juve's favour when Dybala tried to squeeze past two players and Cassata was dismissed after the Argentine tumbled to the ground.

Juventus had substitute Adrien Rabiot sent off for a second bookable offence with three minutes to play but Genoa were still not safe.

Ronaldo turned in Juan Cuadrado's pass in the third minute of stoppage time but, after Juventus had celebrated the goal, it was disallowed for offside following a VAR check.

But in the next attack, Ronaldo collected a pass inside the area, cut inside Sanabria and fell forwards.

He seemed to try to make contact with Sanabria rather than the other way round but the referee awarded a penalty and the irrepressible Portuguese converted. 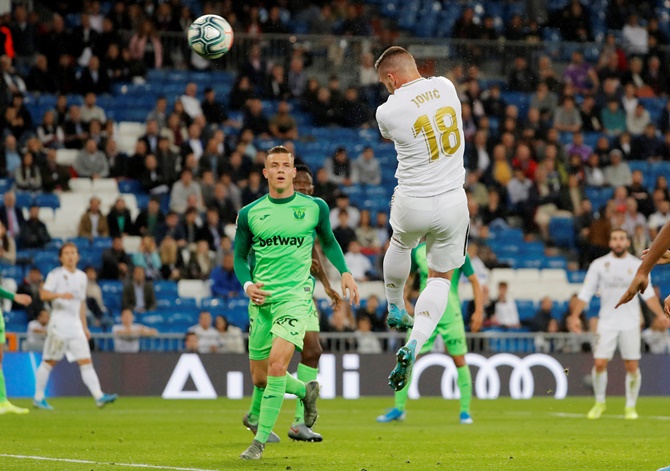 Real Madrid captain Sergio Ramos scored for the 16th La Liga season in a row as his side coasted to a 5-0 win at home to basement club Leganes in La Liga on Wednesday to move up to second in the standings.

The defender became only the second player after Barcelona's Lionel Messi to score in 16 consecutive Spanish league campaigns when he slotted home from the penalty spot at the second time of asking for Real's third goal in the 24th minute.

Ramos had initially seen his shot saved but was given a second attempt as a VAR review ruled that Leganes goalkeeper Juan Soriano had strayed off the goalline before diving to parry the ball away.

Real had made a flying start to the game, taking the lead in the seventh minute through 18-year-old Rodrygo Goes and doubling it 60 seconds later through Toni Kroos.

Madrid were awarded a second penalty in the second half but Ramos handed the ball to Karim Benzema and the Frenchman made no mistake to net the fourth goal.

Substitute Luka Jovic had a goal ruled out for offside after a VAR review but the Serbian finally scored his first goal for the club since signing from Eintracht Frankfurt for 60 million euros ($67 million) in June, completing the rout with a header in added time.

Real coach Zinedine Zidane praised his two young forwards Rodrygo and Jovic as well as veteran Benzema after his side's biggest win of the season in all competitions.

"I'm happy for both of them, Rodrygo has a lot of character and with every game he seems to be settling better into the team," the Frenchman told a news conference.

"We're also delighted for Luka because he needed to score, he hasn't been playing much but it's important that he gets minutes and can take the pressure off Karim.

"Karim was brilliant as always, it was important that he scored today because as Real Madrid's number nine he needs goals, but he contributes so much more than goals, he makes everyone else perform better."

Zinedine Zidane's side are second in the standings on 21 points, one behind leaders Barcelona who have also played 10 games after the 'Clasico' between the two rivals was postponed until December. Leganes are bottom with five points.

Granada, who are third on 20 points, could leapfrog Real and Barca to return to the top of the table when they visit Getafe on Thursday.

AS Roma thumped hapless Udinese 4-0 away in Serie A on Wednesday despite playing for nearly an hour with 10 men after a controversial sending-off for defender Federico Fazio.

Udinese, beaten 7-1 by Atalanta on Sunday, were in more trouble when Nicolo Zaniolo gave Roma the lead in the 14th minute after pouncing on a mistake in midfield.

But the hosts got a break in the 32nd minute when Fazio was dismissed for denying Stefano Okaka a scoring chance even though it barely appeared to be a foul. Roma protested furiously but Fazio's dismissal was confirmed after a VAR check lasting several minutes.

Yet it was Roma who scored again in the 51st minute when Chris Smalling was left unmarked at the far post to turn the ball in from a corner.

Justin Kluivert added a third from a counter-attack three minutes later and Aleksandar Kolarov completed Udinese's misery with a 66th minute penalty awarded for handball as Roma climbed to fourth with 19 points.

Their neighbours Lazio also won 4-0, against Torino, with forward Ciro Immobile scoring twice, the second a penalty, to take his league tally for the season to 12.

Francesco Acerbi opened the scoring for Lazio, who have 18 points, and Torino forward Andrea Belotti put through his own net in the 90th minute, accidentally heading in from a corner.

Cagliari also have 18 points after two goals from Joao Pedro and one from Giovanni Simeone gave them a 3-2 win at home to Bologna, who had taken the lead through a Federico Santander penalty.

Bologna's second, in the last minute, was an own goal by Cagliari goalkeeper Robin Olsen.

Fiorentina continued their climb up the table, moving into eighth, by coming from behind to win 2-1 at Sassuolo thanks to Gaetano Castrovilli's diving header and a Nikola Milenkovic goal in the last half hour.

Jeremie Boga had put Sasuolo ahead in the 24th minute with a superb solo effort.

Sampdoria stayed bottom but salvaged a 1-1 draw at home to Lecce when Gaston Ramirez headed a stoppage time equaliser, the ball crossing the line before being cleared by Lecce's defence.

Gianluca Lapadula gave Lecce an eighth minute lead and the match turned on an incident at the end of the first half when the referee awarded Lecce a penalty for handball and sent off Sampdoria's Alex Ferrari but then reversed both decisions after a VAR review.