Paris St Germain extended their Ligue 1 lead to 13 points with a 4-3 home victory against Girondins de Bordeaux on Sunday but the French champions were again exposed at the back and had Neymar sent off.

A Marquinhos double, Edinson Cavani's 200th PSG goal and a goal by Kylian Mbappe put the capital side on 65 points from 26 games but they lost captain Thiago Silva to a muscle injury and Neymar picked up a straight red card for a late challenge in stoppage time.

Bordeaux, who scored through Hwang Ui-jo, Pablo and Ruben Pardo, are 12th on 35 points.

Five days after losing 2-1 at Borussia Dortmund in a Champions League last-16 first leg, PSG did little to reassure their fans.

The players had 'Stay Strong China' written on their shirts to show their support for the victims of the coronavirus that has killed more than 2,000 people in China.

In a tough first half, Silva limped off the pitch in the 16th minute with a muscle problem and was replaced by Idrissa Gueye. Hwang headed home from Nicolas de Preville’s corner as the PSG defence were caught off guard in the 18th minute, only for the hosts' all-time best scorer Cavani to level with a header from Angel Di Maria's cross seven minutes later.

The hosts increased the pressure and Cavani hit the woodwork before Mbappe forced Benoit Costil to make a superb save at the half hour.

Marquinhos deflected Di Maria's free kick with his shoulder to put the home side ahead three minutes into added time in the first half, only for Pablo to equalise one minute later in farcical fashion.

Second-choice Sergio Rico's clearance from Marco Verratti's backpass bounced on to Pablo's knee and into the goal.

PSG, however, accelerated after the break and Marquinhos put the French champions ahead after 63 minutes, poking home the ball after Costil had parried a Cavani header into his path.

Six minutes later, Mbappe doubled the advantage from close range after being set up by Cavani.

PSG were kept on their toes until the final whistle as Pardo found the top corner with a superb strike seven minutes from time.

Neymar was then sent off for a late and rough challenge on Yacine Adli.

Felix back on target as Atletico beat Villarreal to go third 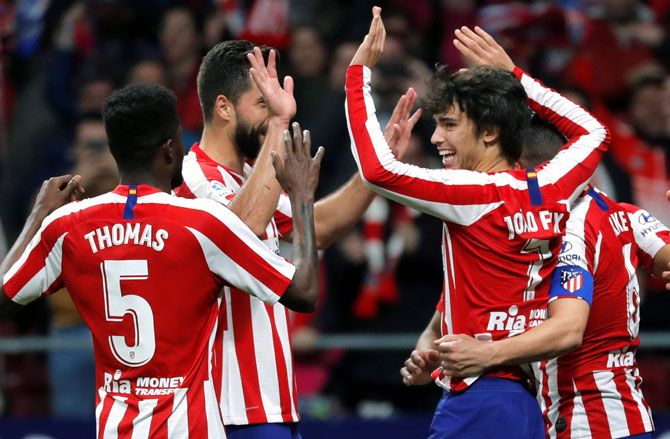 Atletico Madrid's record signing Joao Felix scored for the first time in the league for almost five months as his side beat Villarreal 3-1 at home on Sunday to climb back into the top-four in La Liga.

The 20-year-old, who Atletico signed from Benfica for 126 million euros ($136.62 million) last year, had missed most of the last month through injury but came off the bench to score his side's third goal after Paco Alcacer had given Villarreal an early lead.

Argentine forward Angel Correa pulled Atletico level shortly before halftime while captain Koke put them in front in the 64th minute before substitute Felix rubber-stamped the win with a low shot from just outside the area 10 minutes later.

The win followed Atletico's impressive 1-0 victory at home to Champions League holders Liverpool in Tuesday's last-16 first leg and took Diego Simeone's side into third in the standings, level on 43 points with fourth-placed Sevilla after 25 games.

Villarreal would have gone above Atletico had they won but instead they stayed seventh on 38 points.

"It was very important for us to get the three points because we knew that our rivals had got good results," said goalscorer Correa, referring to Sevilla beating Getafe earlier in the day.

"We want to be fighting near the top of the table so we are very happy with this result."

Atletico have struggled for large parts of this season but went into the game lifted by the victory over Liverpool, in which the team had embraced their old, abrasive style of play.

There was added optimism with the return of Felix as well as right back Kieran Trippier, who had recently undergone surgery to treat a groin problem but was named on the substitutes' bench alongside the Portuguese forward.

Alcacer, however, punctured the positive mood at the Wanda Metropolitano by putting Villarreal in front with a powerful strike from outside the box, scoring for the second time in four league games since his move from Borussia Dortmund.

Atletico could not rely on Simeone to whip the home fans up, as he was serving a one-match touchline ban but the home side managed to turn the game around with the help of Correa, who has been their most consistent performer in a troubled season.

The Argentine prodded home a lofted ball from Sime Vrsaljko to draw Atletico level then laid on the pass for Koke to head Atletico in front from close range after good work from substitute Trippier.

The home fans soon found their voice and Felix lifted them further with his strike.

"The win over Liverpool has given us confidence and strength for the final stretch of the season," added Correa.

"Liverpool are the best team in the world, they haven't lost in the league for over a year so beating them brought us immense happiness." IMAGE: Henrikh Mkhitaryan scored a goal and set up another for Cengiz Under to lift Roma to a 4-0 victory agianst Lecce. Photograph: Alberto Lingria/Reuters

AS Roma notched up their first home league win for more than two months when they hammered Lecce 4-0 in Serie A on Sunday, helped by an inspirational performance from Henrikh Mkhitaryan.

Fifth-placed Roma, suffering from the inconsistency which has dogged them over the last few seasons, had lost their previous three league games while Lecce had won theirs, but they made surprisingly light work of the visitors.

The match was one of only two played in Serie A on Sunday due to the coronavirus outbreak in northern Italy. Four others were called off, including third-placed Inter Milan's game at home to Sampdoria.

"Mkhitaryan is a great player, he makes the right decisions in the final third of the pitch and gives continuity to our attack," said Roma coach Paulo Fonseca. "Not conceding goals is really important and that was down to our marking in midfield."

Mkhitaryan set up the first goal in the 13th minute when he laid off the ball for Cengiz Under to burst through the Rome defence and comfortably beat Mauro Vigorito.

The Armenian scored the second himself when he ran on to Edin Dzeko's pass and turned a first-time shot under Vigorito eight minutes before halftime.

The third came in the 69th minute from Dzeko who beat Vigorito at the second attempt and saw the offside flag go up before the goal was awarded thanks to a VAR review.

Aleksandar Kolarov completed the scoring as Roma won a league match at the Stadio Olimpico for the first time since Dec. 15. Lecce stayed three points clear of the relegation zone in 16th. 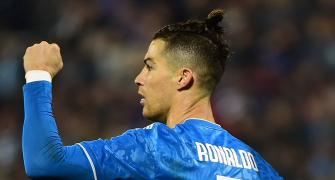 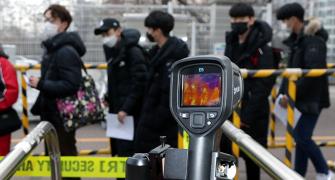 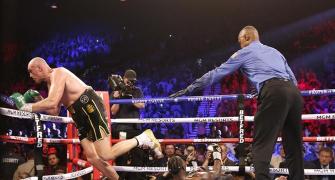 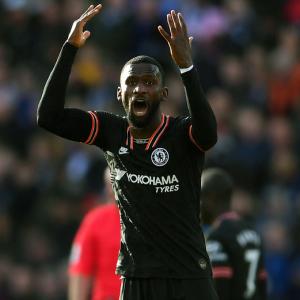 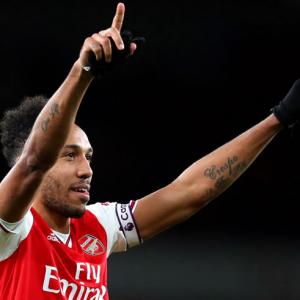