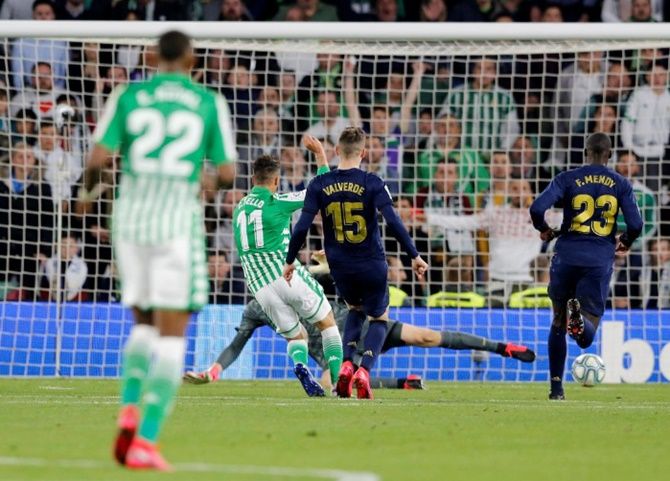 Real Madrid failed to build on last week’s ‘Clasico’ victory as they lost 2-1 at Real Betis in a fiery match on Sunday and surrendered top spot in La Liga to Barcelona.

Real are now second on 56 points after 27 games, two behind Barca who beat Real Sociedad 1-0 on Saturday to regain first place a week after losing 2-0 at the Bernabeu.

Betis had gone ahead in the 40th minute after a moment of confusion as they appealed for a penalty when Sergio Ramos collided into Nabil Fekir but the loose ball landed at the feet of defender Sidnei who rifled it into the roof of the net.

The Brazilian’s joy was cut short when he was penalised for tripping Marcelo in the area and Karim Benzema converted from the spot, his first goal in seven matches in all competitions.

Betis captain Joaquin missed an open goal in the second half and Real defender Ferland Mendy hammered a shot against the bar but Tello decided an end-to-end game in the 82nd minute, keeping his composure to beat Thibaut Courtois and find the net.

His goal ensured a third defeat in four matches in all competitions for Madrid, who had also lost their last away game against Levante and were beaten in the Champions League by Manchester City last month.

“The result is fair and we have to take a hard look at ourselves, we did not play well at all,” said Real captain Sergio Ramos.

“It’s a real shame we weren’t able to hold on to our place at the top of the table but just as we didn’t go crazy after beating Barca, we’re not going to spend the next week tearing our hair out over this defeat.

“There are lots of points left to fight for but if we want to be champions we cannot afford to waste more opportunities like the one we had today.” 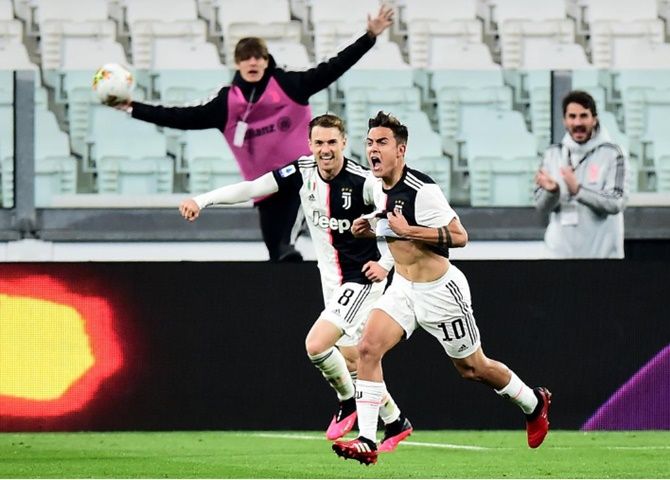 A wonderful winning goal from substitute Paulo Dybala sent Juventus back to the top of Serie A with a 2-0 victory over title rivals Inter Milan at an empty Allianz Stadium on Sunday.

Juve, who opened the scoring through Aaron Ramsey, lead on 63 points, one ahead of Lazio and nine clear of Inter in third, although Antonio Conte’s side have a game in hand.

Ramsey fired home the first goal from close range soon after the break and was also involved in the second.

Juventus’s Argentine forward Dybala exchanged passes with the Wales international on the edge of the area before dribbling around defender Ashley Young and showing great invention to find the bottom corner with the outside of his boot.

The game was played without fans present after the Italian government ordered that all matches are held behind closed doors until April 3.

“This is an important victory, but there are still 12 games to go so it’s a long road ahead,” coach Maurizio Sarri told Sky Sport Italia. “This was far more what I wanted to see from my Juventus."

“We had seemed a little empty and flat recently, so we had to choose players who could guarantee more energy, both physical and psychological. That’s the sensation we got in training from these players, but that could change in a couple of weeks.”

Inter goalkeeper Samir Handanovic returned from injury and they were grateful to have the Slovenian back as he blocked a Matthijs De Ligt header and showed quick reactions to palm away a Blaise Matuidi drive inside the opening 15 minutes.

The hosts had the better chances in a lively first half, but Marcelo Brozovic forced Juve keeper Wojciech Szczesny into a sharp save with a powerful drive before the break.

Juventus made the breakthrough 10 minutes into the second half when Matuidi’s cut-back was taken off the toe of Cristiano Ronaldo by Inter defender Alessandro Bastoni, only to fall into the path of Ramsey who drilled a shot home via a deflection.

Dybala was surprisingly dropped to the bench but made a huge impact after his introduction, controlling a long pass with his first touch before playing a one-two with Ramsey, dancing past Young and prodding in with a deft finish after 67 minutes.

Ronaldo aimed to make his mark on his 1,000th official game as he chased a Serie A record of scoring in 12 straight games and he came close in stoppage time as his shot swerved narrowly wide before he dragged a low effort beyond the far post.

The game marked Conte’s return to Turin after spells with Juventus as a player and coach, but it was not a happy one as his side fell to their second defeat of the season against the Italian champions.

“The difference between us and Juventus, not counting the game in hand with Sampdoria, is six points,” Conte said. “That’s the two defeats, at San Siro and here."

“We tried to stay in their slipstream, but must learn from defeat and take the lessons of comparison to grow in terms of character, quality and strength. It’s a loss that must help us to grow and understand how far away we are.” 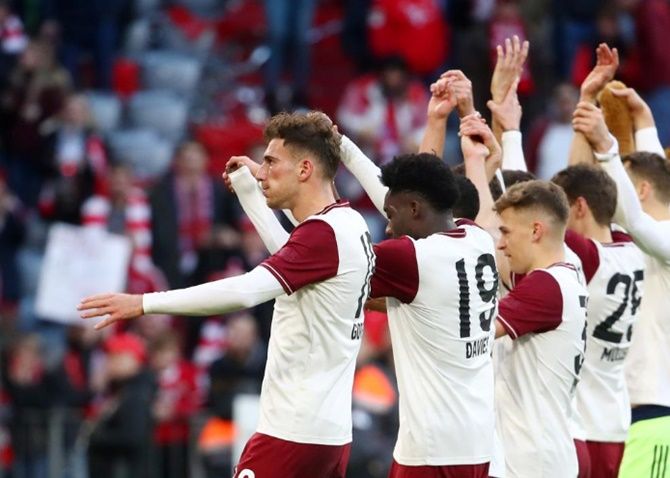 Bayern Munich never really needed to hit top form in their 2-0 victory at home to Augsburg on Sunday as they moved four points clear at the top of the Bundesliga.

The Bavarians, who have now won 10 of their last 11 league games, were far from impressive, having only one shot on target in the first half, with injured top scorer Robert Lewandowski’s marksmanship sorely missed.

Their fans celebrated the team’s fourth consecutive league win on the club’s 120th anniversary in a festive atmosphere even while the German football league (DFL) was considering measures to contain the outbreak of the coronavirus.

The DFL said on Sunday it would be discussing the matter with clubs after Germany’s health minister Jens Spahn called on organisers of large public events to cancel them and urged members of the public to stay at home.

Bayern had to wait 53 minutes before finally breaking down the disciplined Augsburg defence when Thomas Mueller timed his run into the box perfectly to volley in a Jerome Boateng chip.

Wearing replicas of the first Bayern shirts 120 years ago, to mark the club’s birthday, they laboured to add another in the second half with Augsburg keeper Andreas Luthe stopping a point-blank Philippe Coutinho shot and Serge Gnabry scuffing a handful of golden chances.

Augsburg wasted their best opportunities late in the game when Florian Niederlechner’s shot was blocked by Manuel Neuer and Alfred Finnbogason headed wide in the 81st.

Bayern’s Leon Goretzka then slotted in their second in stoppage time to kill off the game.

“We knew it would be hard and the first half proved that,” said Bayern coach Hansi Flick. “We did not have enough pace in our game. Then in the second half we struggled to finish the job before Augsburg had their own huge chance.”

Bayern move up to 55 points, four ahead of Borussia Dortmund, who are second after Saturday’s 2-1 win at Borussia Moenchengladbach. RB Leipzig are third following a goalless draw at VfL Wolfsburg. 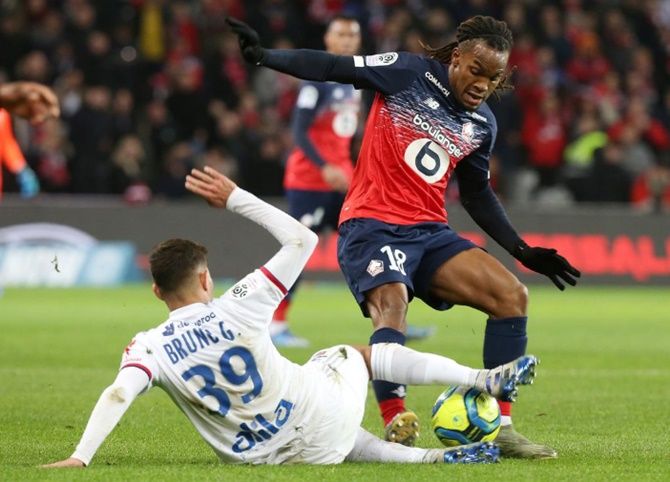 A first-half goal by Loic Remy earned Lille a 1-0 home victory in Ligue 1 over Olympique Lyonnais on Sunday and kept their hopes alive of playing in next season’s Champions League.

While Lille, who are fourth with 49 points from 28 games, remain in the hunt for a podium finish, Lyon slipped down to seventh on 40.

Third-placed Stade Rennais, who have 50 points, narrowed the gap behind second-placed Olympique de Marseille to six points with a 5-0 demolition of Montpellier.

Champions Paris St Germain, whose trip to RC Strasbourg on Saturday was postponed amid the coronavirus outbreak, top the table with 68 points from 27 matches.

Lille dominated from the start and were rewarded when Remy fired home from Renato Sanches’ cutback.

They came close to doubling the tally six minutes into the second half but Jonathan Ikone’s attempt from just inside the box crashed against the post.

Earlier, Rennes had the chance to make the most of Marseille’s 2-2 draw against Amiens on Friday and they duly delivered.

Goals by Faitout Maouassa, Flavien Tait, Romain Del Castillo and a double by Adrien Hunou sank visiting Montpellier, who are now eighth on 40 points, behind Lyon on goal difference. 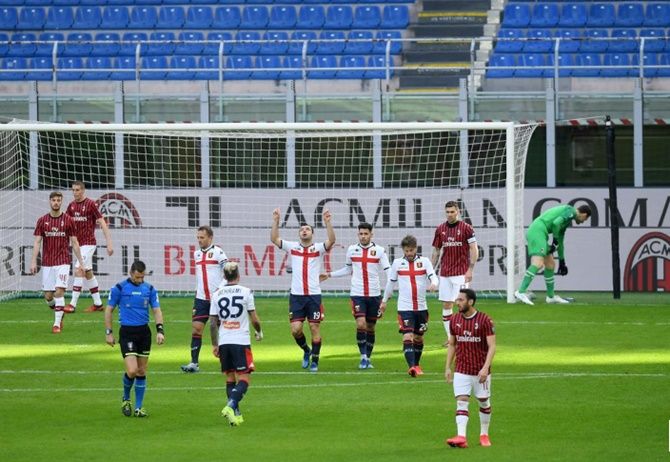 IMAGE: Genoa's Goran Pandev celebrates scoring their first goal with teammates. The match is being played behind closed doors to spectators as the number of coronavirus cases grow around the world. Photograph: Daniele Mascolo/Reuters

Relegation-battling Genoa moved out of the Serie A drop zone thanks to a surprise 2-1 win over AC Milan at an empty San Siro on Sunday.

The visitors raced into a two-goal lead before halftime after Goran Pandev and Francesco Cassata both turned in crosses from close range.

Milan rallied after the break as Zlatan Ibrahimovic pulled one back, but they could not find an equaliser in an eerie atmosphere at one of Italian football’s most iconic stadiums and fell to their first home defeat since Nov. 3.

All Serie A matches are to be played behind closed doors until April 3 as part of measures introduced by the Italian government to tackle the coronavirus outbreak.

The result leaves Milan in seventh place on 36 points, while Genoa moved above Lecce and into 17th place on 25 points.

At the Stadio Luigi Ferraris in Genoa, a late double from Fabio Quagliarella earned Sampdoria a 2-1 comeback win over Hellas Verona that ended the visitors’ nine-match unbeaten league run and kept the hosts one point above the relegation zone in 16th place.

Udinese and Fiorentina drew 0-0, with Fiorentina’s defender Nikola Milenkovic coming closest when his volley thumped off the post in the first half. 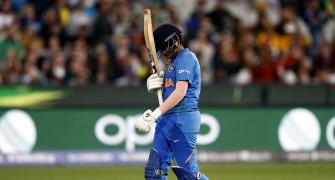 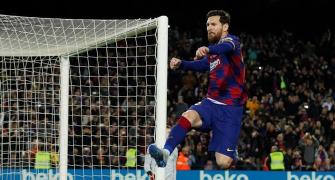 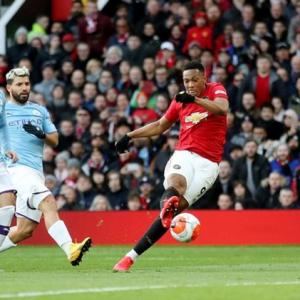 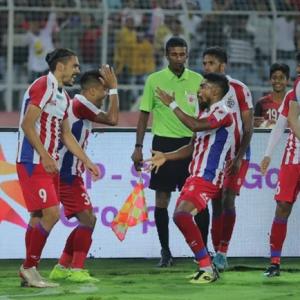 ATK fight back to oust Bengaluru and enter ISL final