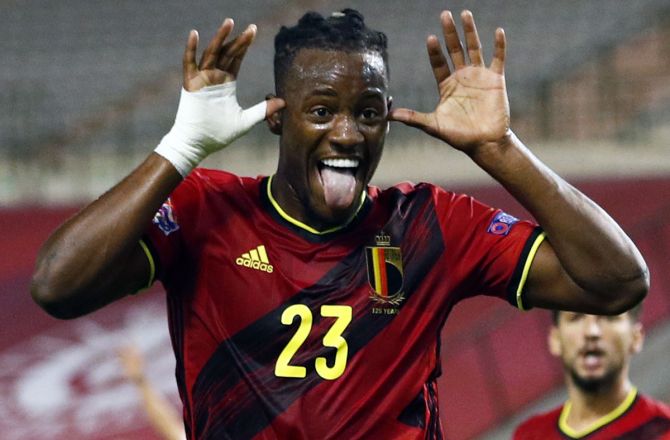 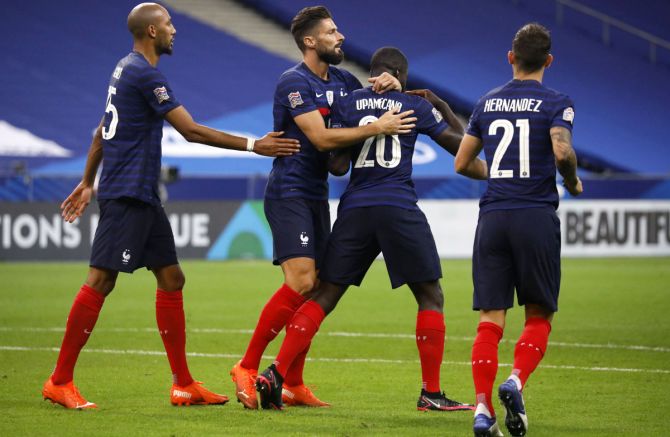 France earned a rollercoaster 4-2 home win over Croatia in an entertaining top-tier Nations League Group 3 match on Tuesday with the outcome a carbon copy of their memorable clash in the 2018 World Cup final.

The French made it two wins out of two after their opening 1-0 victory at Sweden and stayed level on six points with Portugal, 2-0 winners at Sweden after a Cristiano Ronaldo brace boosted his international tally to 101 goals.

In contrast, the Croatians suffered their second successive defeat after a 4-1 drubbing at European champions and Nations League holders Portugal.

With the early stages being played at walking pace, the game looked unlikely to produce an avalanche of goals but France, playing in a revamped 3-4-1-2 formation, moved up a gear after falling behind.

Antoine Griezmann missed a sitter before sweeping home a 43rd-minute equaliser from a flowing move and France turned the tide with an own-goal by Croatia keeper Dominik Livakovic on the stroke of halftime. 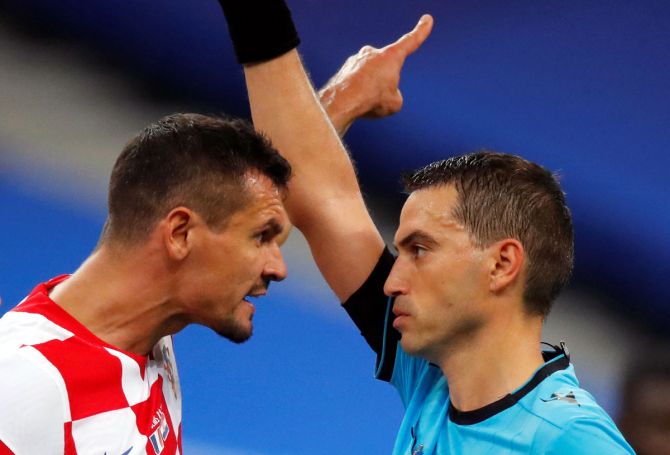 Anthony Martial, who made his first start for France since March 2018, scrambled a close-range effort on to the post and the ball trickled over the line after rebounding off Livakovic's back.

Halftime substitute Josip Brekalo levelled with a fine solo effort in the 55th minute, muscling his way past three defenders before he steered the ball past Lloris.

France manager Didier Deschamps said he would stick with the unfamiliar new formation although he conceded it would take time to bed in.

"We played with greater style, apart from the first 30 minutes when we were dominated physically and were not precise enough technically," Deschamps told the France's TF1 television.

"I changed seven players between the first and the second game. This system needs to be repeated in order to be integrated by the players."

"We have a lot of work to do if we are going to be competitive in the Nations League and in next year's European championship." 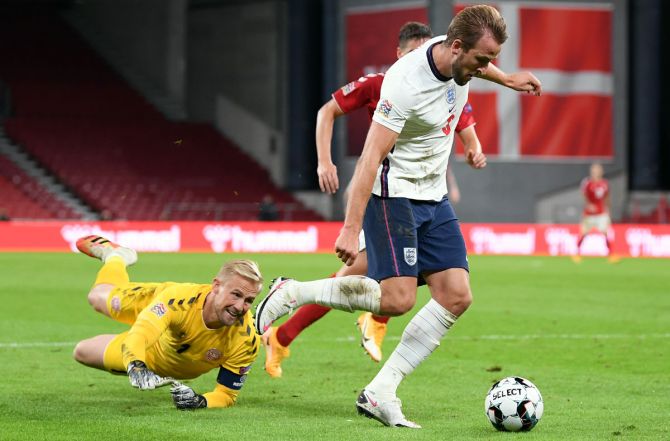 IMAGE: Denmark goalkeeper Kasper Schmeichel attempts to block Harry Kane of England as he runs past him with the ball during the UEFA Nations League group stage match at Parken Stadium in Copenhagen. Photograph: Michael Regan/Getty Images

England were held to a 0-0 draw by Denmark in an uninspiring Nations League match at the Parken Stadium on Tuesday as Gareth Southgate's side concluded a troubled international break.

England were without Mason Greenwood and Phil Foden, who returned home following Saturday's win in Iceland after breaking COVID restrictions.

Southgate was already without centre-half Harry Maguire who was involved in a fracas on holiday in Greece before the squad gathered for the games.

The only positives for England from these two games was the fact that they return home unbeaten, having given debuts to four more players on Tuesday.

Defender Conor Coady of Wolverhampton Wanderers and Leeds United midfielder Kalvin Phillips made their debuts from the start, while Aston Villa's Jack Grealish and Arsenal's Ainsley Maitland-Niles came on for their first England appearances.

But it was the hosts who had the best chances in the League A Group 2 match with Inter Milan midfielder Christian Eriksen involved on both occasions.

Denmark keeper Kasper Schmeichel was also alert to deal with a Raheem Sterling shot from the edge of the box before Eriksen wasted a great chance in the 81st minute, firing over from a promising central position. 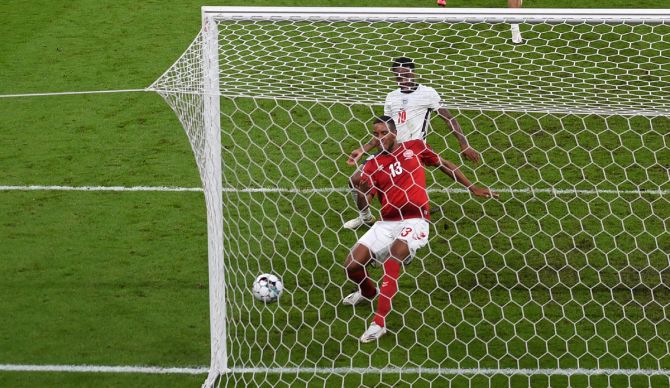 Simon Kjaer should have done better for Denmark with a free header in stoppage time while at the other end England captain Harry Kane rounded Schmeichel only to see his goal-bound effort cleared off the line by Mathias Jorgensen.

It would have been harsh on the Danes had Kane taken that chance and won a game which England, playing with five at the back, appeared to treat more like the friendlies of the past.

"I learned a lot. We tried a new system which we will get better at," said Southgate.

"We wanted to start with stability. We could have probably been a bit higher in terms of our attacking threat in the first half but we were in control," he added.

"In the second half we started to accelerate the game with the changes we made when we felt in control. (Substitutes) Mason (Mount) and Jack (Grealish) in midfield made us more forward thinking."

Belgium, who thrashed visitors Iceland 5-1, lead the group with six points from two games with England on four, Denmark one and Iceland none.

Belgium striker Michy Batshuayi scored twice as the hosts eased to a 5-1 victory over Iceland and a 12th win in a row in their Nations League clash at the King Baudouin Stadium on Tuesday.

Holmbert Fridjonsson gave Iceland an early lead, but Axel Witsel, Batshuayi, Dries Mertens and teenager Jeremy Doku all scored to ensure there would be no surprise result.

Belgium lead the League A Group 2 standings with a maximum haul of six points from two games, followed by England on four, Denmark with one and Iceland none.

Roberto Martinez’s side will next be in action against England at Wembley on Oct. 11 with only the top team in each pool advancing to the Nations League finals.

Belgium's Kevin De Bruyne, named Player of the Year by the Professional Footballers' Association (PFA) in England shortly before kick-off, returned to the team after missing Saturday’s 2-0 win in Denmark following the birth of his third child. 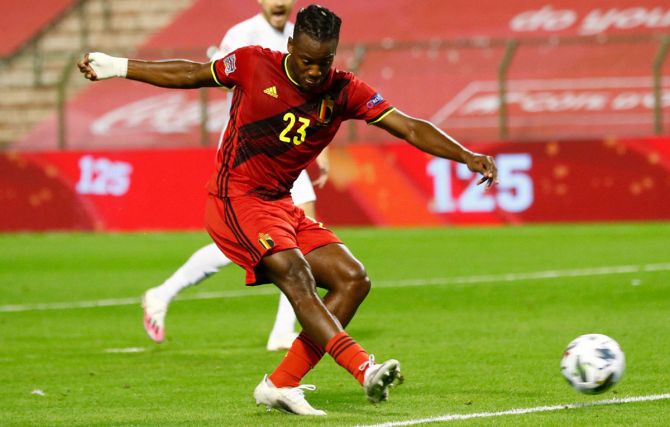 It was a lively start to the game with three goals inside the opening 16 minutes as Iceland grabbed the lead through Fridjonsson.

The tall striker had already missed a golden chance with a free header from close range when his deflected shot from the edge of the area looped over debutant Belgium goalkeeper Koen Casteels and into the net.

That delight for the visitors was to be short-lived though as Witsel scored moments later with a header after Mertens’ free-kick had rebounded off the crossbar.

Batshuayi also netted from a rebound when Witsel’s shot was pushed into his path by Iceland goalkeeper Ogmundur Kristinsson.

Mertens scored his second goal in as many games early in the second half after being teed up by the influential De Bruyne and Batshuayi netted his second with a lovely backheel finish.

Doku, 18, scored his first international goal on his maiden start for the side with an excellent curling shot 10 minutes from the end to complete a solid run-out for the home side.