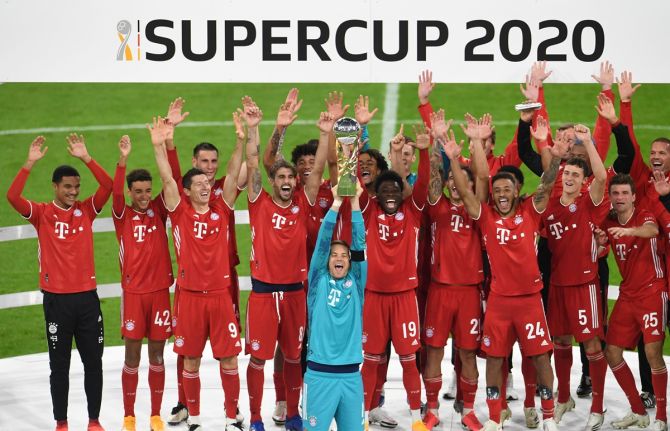 Bayern Munich wasted a two-goal lead and needed a lucky 82nd- minute winner from Joshua Kimmich to beat Borussia Dortmund 3-2 in Germany's Super Cup on Wednesday and secure their fifth title of the year.

Midfielder Kimmich snatched the ball in midfield, played a one-two with Robert Lewandowski and had his shot blocked before the ball bounced back off his foot and into the net.

"It was not that easy especially in the second half. We led 2-0 but then made our own life difficult," said Bayern coach Hansi Flick, who took over in November and has enjoyed a sensational 10 months in charge.

"What counts is that we won the game. Everything else we will need to do better on Sunday (against Hertha)," he added.

Bayern, eager to bounce back from Sunday's shock 4-1 loss to Hoffenheim which snapped their 32-game unbeaten run, quickly raced into a 2-0 lead with goals from Corentin Tolisso in the 18th minute and Thomas Mueller in the 32nd.

Dortmund battled back with a goal from Julian Brandt before Thomas Meunier missed a golden chance to level with only Manuel Neuer to beat but the defender sent his shot well over the bar.

Erling Haaland did better in the 55th minute and should have scored again when he was sent through. Neuer stood his ground, however, to deny the Norwegian and Kimmich snatched the winner.

Bayern have also won the German league and Cup double, the Champions League and the European Super Cup this year. 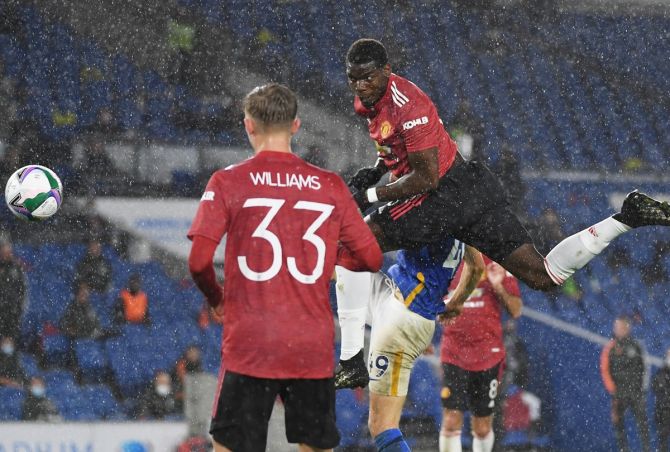 Manchester United earned their second win over Brighton & Hove Albion in five days as they booked a place in the League Cup quarter-finals with a 3-0 win at the Amex Stadium on Wednesday.

It was much more comfortable for United than Saturday's dramatic last-gasp 3-2 league victory, Scott McTominay heading in the opener shortly before halftime before Juan Mata and substitute Paul Pogba scored in the second half.

United manager Ole Gunnar Solskjaer made 10 changes to the team that started at the weekend, with Victor Lindelof the only player to keep his place, and although United struggled for fluency they were too strong for a second-string Brighton side.

Everton striker Dominic Calvert-Lewin continued his superb form with his second hat-trick of the season as the Toffees outclassed West Ham United 4-1 at Goodison Park.

The 23-year-old took his season's tally to eight goals in all competitions, more than any other Premier League player, and he became the first Everton player to score a hat-trick in the League Cup since Paul Rideout against Lincoln City in 1993.

This form has strengthened his case to be included in Gareth Southgate's England squad for three internationals in October, which is due to be named this week. Messi calls for unity after row with Barca board