Romelu Lukaku struck late to rescue a 1-1 World Cup qualifying draw for depleted Belgium on Saturday against a Greek side who were down to 10 men for the final 25 minutes and finished with nine, while Olivier Giroud once again proved his worth to France when he bagged a double in their 3-1 win in Luxembourg.

Images from the World Cup qualifier matches on Saturday: 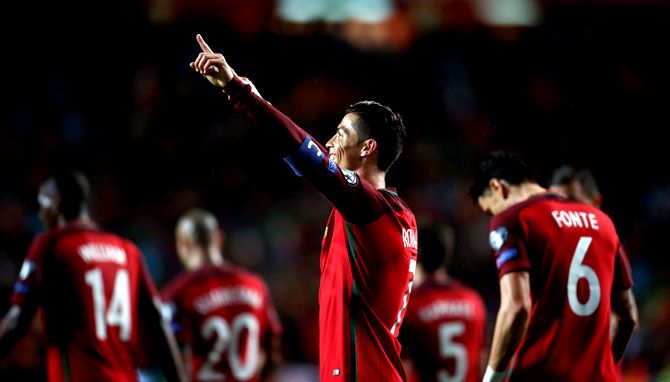 Cristiano Ronaldo scored two stunning goals and took his international tally to 70 as he led Portugal to an emphatic 3-0 win over Hungary in a World Cup qualifier on Saturday.

The Portugal captain scored from 25 metres after he was set up by an outrageous backheel from Andre Silva and smashed in a long-range free kick in the second half. Silva had opened the scoring from a move in which Ronaldo also played a part.

The win kept the European champions three points behind Group B leaders Switzerland who earlier beat Latvia 1-0 to maintain their 100 percent record with 15 points from five games.

Defeat left Hungary a distant third with seven points and only the slimmest of chances of their first World Cup appearance since 1986.

Portugal were nearly knocked out of Euro 2016 at the group stage by Hungary, having to come back three times to force a 3-3 draw.

But they had no such trouble this time despite a slow start in which Ronaldo shot over from a free kick and headed wide after Ricardo Quaresma's cross found him unmarked at the far post.

Just as coach Fernando Santos's decision to leave out Bernardo Silva appeared to be back-firing, Portugal went ahead.

Ronaldo released Raphael Guerreiro on the left and his low, first-time cross was turned in at the far post by an unmarked Silva in the 32nd minute.

Four minutes later, Pepe's long ball out of defence was met by Silva with a first-time backheel to Ronaldo who squeezed a low, left-foot between Peter Gulasci and the near post from 25 metres with stunning precision. 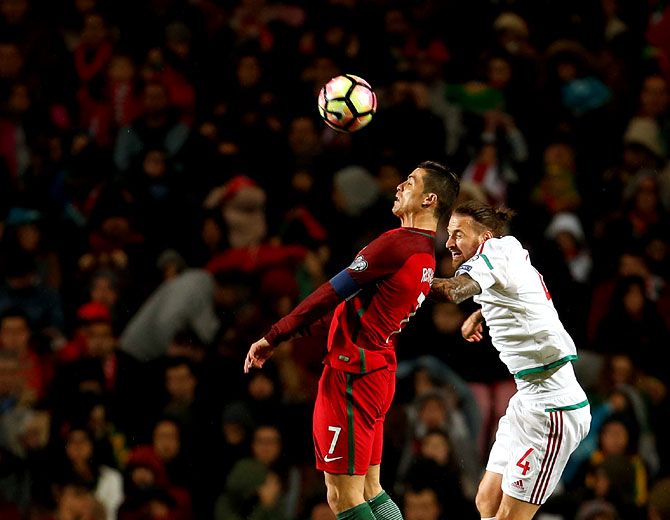 Brimming with confidence, Portugal's record scorer then tried to meet Joao Mario's dinked passed with a bicycle kick but did not get enough power behind the shot which Gulasci saved comfortably.

But he was not to be denied another goal and, inevitably, when Ricardo Quaresma won a free kick outside the area in the 65th minute, it was Ronaldo who took it.

Repeatedly criticised during Euro 2016 for his record from free kicks, he made no mistake this time as he scored with a vicious effort which dipped over the wall and bounced in front of Gulasci.

It was his 70th goal for Portugal in 138 appearances.

The group looks increasingly likely to boil down to Portugal's match at home to Switzerland in October.

Only the winners of the nine European groups go straight to Russia next year while the eight best runners-up go into a playoff round for four more places.

Bulgaria stay in contention after shock win over Dutch 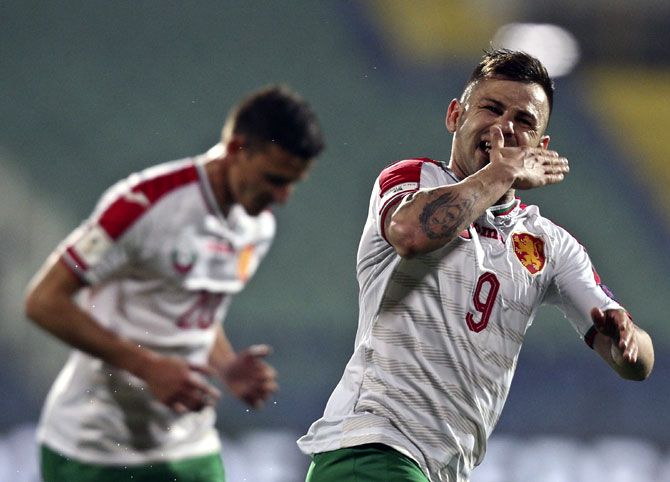 Bulgaria stayed on course to reach the World Cup finals for the first time since 1998 after Spas Delev gave them a 2-0 win over toothless Netherlands in a Group A qualifier on Saturday with his first international goals.

After the win at the Vasil Levski stadium, Petar Hubchev's men climbed to third in the group standings with nine points from five matches, one point behind Sweden and four behind leaders France. Netherlands are fourth on seven.

The lively Delev struck twice in quick succession in the first 20 minutes, pouncing on sloppy defending by 17-year-old Matthijs De Ligt, who became the youngest Netherlands player since 1931.

De Ligt, who has started in just two league games for his club Ajax Amsterdam, could not have made a worse international debut as he misjudged Simeon Slavchev’s long pass, allowing Delev to poke the ball beyond keeper Jeroen Zoet after five minutes.

Delev then punished yet more hesitant defending by De Ligt with a thunderous shot from 18 metres midway through the first half. He gave Zoet no chance after De Ligt's clearance found the head of Georgi Kostadinov, who turned provider.

The visitors enjoyed the lion’s share of possession in the second half as Wesley Sneijder and Wesley Hoedt –- another debutant -- came on as substitutes but they failed to convert it into goals though Davy Claasen came close to scoring.

Bulgaria, missing injured keeper Vladislav Stoyanov and midfielders Svetoslv Dyakov and Georgi Milanov, produced another disciplined performance under Hubchev, leaving the Dutch to continue their search for a first win on Bulgarian soil.

Bulgaria visit Belarus on June 9 in their next game in the group while Netherlands host bottom team Luxembourg. 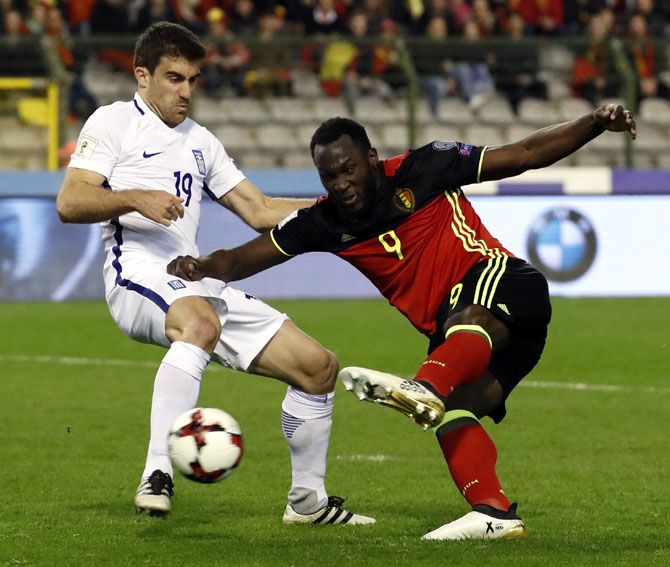 Romelu Lukaku struck late to rescue a 1-1 World Cup qualifying draw for depleted Belgium on Saturday against a Greek side who were down to 10 men for the final 25 minutes and finished with nine.

Lukaku's turn and shot in the 89th minute cancelled out the opener from Kostas Mitroglou, who scored just 18 seconds after halftime in the visitors' first real attack of the game, to keep Belgium top of Group H.

Belgium, missing injured Eden Hazard and Kevin De Bruyne, took advantage of Panagiotis Tachtsidis's dismissal in the 65th minute for a second yellow card as they subjected the Greek defence to a wave of attacks.

Giorgos Tzavellas was also sent off for a second yellow after a scuffle broke out deep into injury time.

Belgium had destroyed the other four group opponents, scoring 21 goals to just one against, while Greece came into the match undefeated.

Belgium were playing only for the second time since 2012 without both Hazard and De Bruyne, their two most creative forces.

With right-back Thomas Meunier also absent, Roberto Martinez had called the match the biggest test of his near eight-month stint as national coach.

Still, with a free-roaming Dries Mertens and a recalled Radja Nainggolan taking up Hazard and De Bruyne's positions, Belgium had appeared to be in control, although with only two chances from Marouane Fellaini to show in a dour first half.

Greek cheers and hugs at the end showed their delight with a point away against the group favourites. Belgium lead with 13 points, two more than Greece, with Bosnia on 10.

Giroud proves his worth to France once again 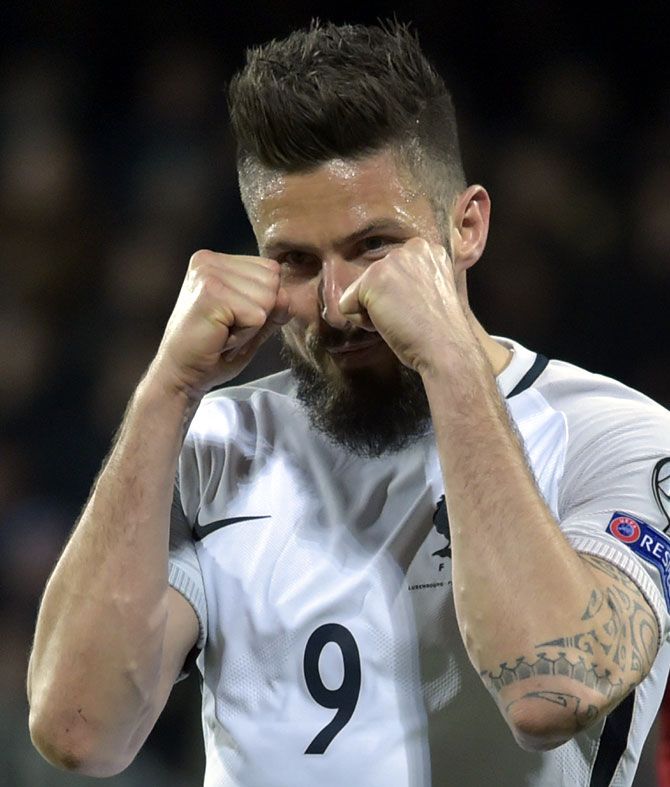 A rare starter for his club Arsenal this season, Olivier Giroud once again proved his worth to France when he bagged a double in their 3-1 win in Luxembourg in a World Cup qualifier on Saturday.

The powerful striker's 22nd and 23rd international goals lifted him to 10th on the list of France's all-time top scorers after being Les Bleus' leading marksman in 2016.

"Even if he's got difficulties at his club, Olivier often scores for us," said France coach Didier Deschamps.

Giroud has started only seven Premier League games for Arsenal, but he showed no sign of rustiness against Luxembourg as his muscular presence proved invaluable against a team playing very defensively.

He scored the first goal from close range after a fine pass from Djibril Sidibe and headed home the second from Benjamin Mendy's cross in his 60th international.

"It's a real pleasure because strikers need goals and statistics are important for us," Giroud said.

"Whatever people say about me, I stay true to myself and give my answers on the pitch."

His performance helped France stay top of qualifying Group A with 13 points from five games, three ahead of Sweden who they visit on June 9.