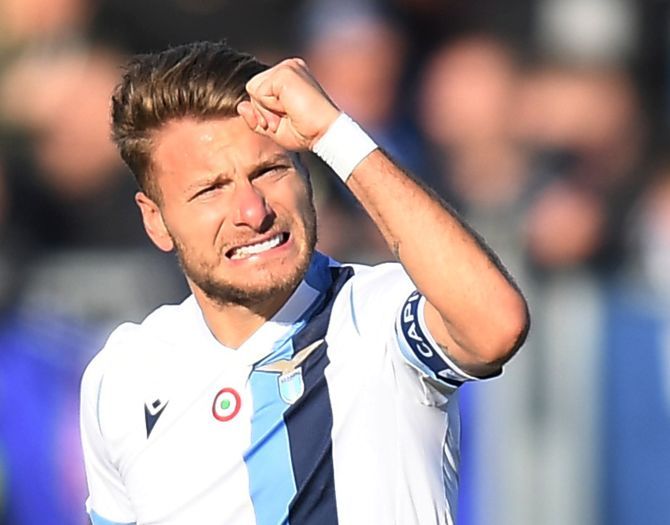 Simone Inzaghi’s side overcame the absence of several key players as they cut the gap between themselves and leading pair Juventus and Inter Milan to three points after scoring an injury-time winner for the third away game in row.

Juventus and Inter, who have 42 points each from 17 games, both play on Monday while Lazio, with 39 from 17, have an outstanding fixture at home to Verona to come in early February.

Lazio had to reshuffle their midfield as Lucas Leiva and Luis Alberto -- their key assist-provider this season -- were both suspended while Danilo Cataldi was not fully fit.

Lazio forward Felipe Caicedo netted from close range after seven minutes but saw his effort ruled out for offside, then Senad Lulic struck the post.

However, Brescia, who have enjoyed a new lease of life since Eugenio Corini was recalled as coach in December one month after being sacked, went ahead with a Mario Balotelli volley in the 18th minute, his first home goal since joining his hometown club this season.

Lazio levelled after Andrea Cistana fouled Caicedo and was sent off for a second bookable offence and Immobile converted the penalty in the 42nd minute despite not connecting cleanly.

The visitors struggled to break down their 10-man opponents in the second half but yet again won the match at the death as they did in matches away to Sassuolo and Cagliari.

A long ball was floated into the Brescia area and Caicedo laid it off to Immobile who scored his 19th goal of the season.

Balotelli says Lazio fans should be ashamed after insults 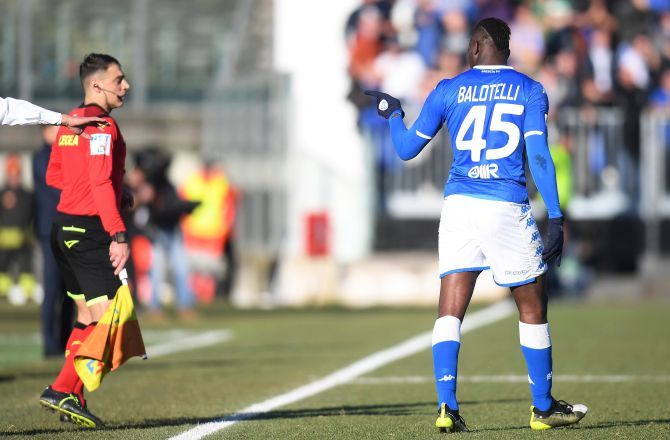 IMAGE: Brescia's Mario Balotelli gestures towards the linesman during the match against Lazio on Sunday. Photograph: Daniele Mascolo/Reuters

Brescia striker Mario Balotelli told Lazio fans they should be ashamed of themselves after saying he had been subjected to insults from them during a Serie A match between the two sides on Sunday.

"Lazio fans present at the stadium today, shame on you," he wrote on Instagram, adding the hashtag #saynotoracism although it was not clear whether he was claiming the insults were of a racist nature.

Balotelli, who scored Brescia's goal in a 2-1 home defeat, complained twice to the referee about the insults during the first half and Italian media said an announcement was made to Lazio fans telling them to stop.

Italian football has been plagued by racism and 29-year-old Balotelli, born in Sicily to Ghanaian parents and given up for adoption when he was three, has been subject to racist abuse throughout his career.

In November he threatened to walk off the pitch in protest at racist abuse from the crowd during a match in Verona.

Sociedad lose to Villarreal after crumbling in second half

Real Sociedad’s hopes of getting back into La Liga’s top-four were hit as they slumped to a 2-1 defeat at home to Villarreal on Sunday, collapsing in the second half after dominating the first period.

Willian Jose put the home side ahead midway through a first half in which they created a slew of chances but Manu Trigueros levelled 13 minutes into the second period from the penalty spot after Samuel Chukwueze was felled by Igor Zubeldia.

Santi Cazorla then gave the visitors the lead in the 75th minute with a strike that was originally ruled offside then awarded following a VAR review.

The defeat leaves Sociedad in fifth place on 31 points, four behind fourth-placed Sevilla who drew 1-1 at home to Athletic Bilbao on Friday. Villarreal meanwhile climbed up to ninth place on 28 points, raising their hopes of finishing in the top-six.

Kerala Blasters ended their 10-match winless run in the Hero Indian Super League with a convincing 5-1 demolition of Hyderabad FC in Kochi on Sunday.

Bartholomew Ogbeche (33', 75') scored twice in a contest that saw the visitors score the opener through Bobo (14').

It was the first time that the Kochi-based side scored five goals in an ISL game and the result takes them to the seventh spot in the table while Hyderabad continue at the bottom.

Mohun Bagan defeated Real Kashmir FC by 2-0 to reclaim their top spot in the I-league's points table in Srinagar on Sunday.

As many as 11,500 spectators thronged the stadium to watch the match. In the thrilling encounter, Joseba Beitia scored the opening goal of the match in the 71st minute and Nongdamba Naorem doubled Mohun Bagan's lead over Real Kashmir FC in the 73rd minute.

After the victory, Mohun Bagan regained the top spot in the I-league with 10 points.

"It's heartening to see the popularity of the game and response of the people for the RKFC as well as the game. Football emerged as the winner at the end of the game," he said.

All India Football Federation's developmental side Indian Arrows played out a 1-1 draw with NEROCA FC in the I-League in Vasco on Sunday.

Sushil Meitei gave the visitors the lead in the 24th minute before Vikram Partap Singh equalised for the hosts three minutes before the end of first half.

© Copyright 2021 Reuters Limited. All rights reserved. Republication or redistribution of Reuters content, including by framing or similar means, is expressly prohibited without the prior written consent of Reuters. Reuters shall not be liable for any errors or delays in the content, or for any actions taken in reliance thereon.
Related News: Lazio, Brescia, Mario Balotelli, Ciro Immobile, Real Kashmir FC
COMMENT
Print this article 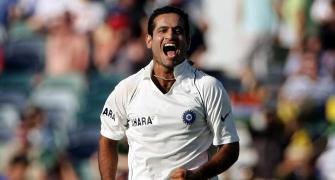 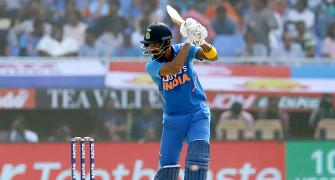 'Pick Rahul ahead of Dhawan for T20 World Cup' 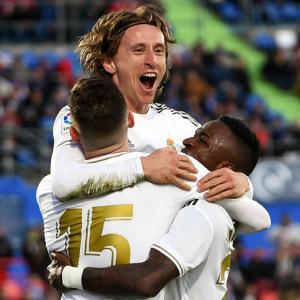 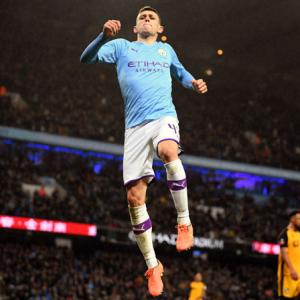