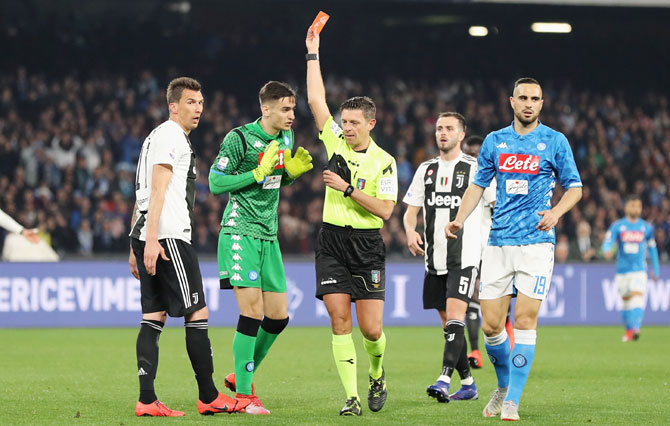 Serie A leaders Juventus held on to win 2-1 at Napoli in a stormy top-of-the-table clash on Sunday which saw both teams have a player sent off and Lorenzo Insigne miss a late penalty for the hosts.

The win, courtesy of goals from Miralem Pjanic and Emre Can, took Juve 16 points clear of Napoli and almost certainly wrapped up an eighth straight title for the unbeaten Turin giants who have 72 points out of a possible 78 with 12 games left.

Juventus raced into a 2-0 halftime lead after Napoli goalkeeper Alex Meret was sent off in the 25th minute. The visitors then had Pjanic dismissed and Napoli's Jose Callejon pulled one back before Insigne let the Turin side off the hook.

The game hinged on an incident in the 25th minute when Napoli fullback Kevin Malcuit's back pass was intercepted by Cristiano Ronaldo, forcing Meret to come out of his penalty area and lunge at the Portuguese forward who went to ground.

The referee awarded a straight red card without reviewing the incident on the pitchside monitor. Replays, though, suggested that, although Ronaldo had to jump over Meret's outstretched leg, no contact was made.

"The rules, as I understand them, say that Meret should be sent off whether he makes contact or not," said Juve coach Massimiliano Allegri.

"The referee decided, as did the video assistant."

However, Napoli coach Carlo Ancelotti said the referee should have seen the replay himself.

"The game was influenced by a controversial decision -- did Meret touch him or not, which direction was the ball going? It would have been easier if the referee had looked on the monitor, given that it is there," he said. 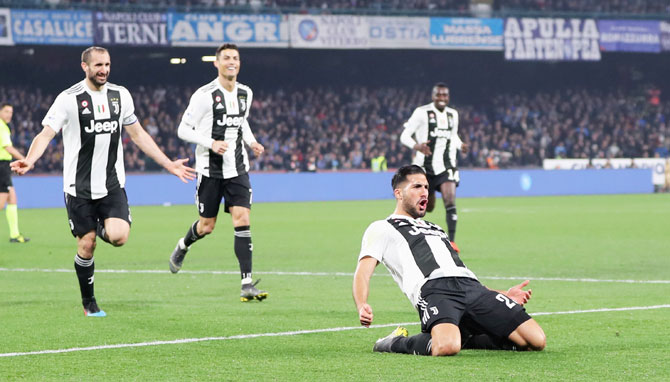 Meret's dismissal meant Napoli striker Arkadiusz Milik was sacrificed and replaced by substitute keeper David Ospina, whose first job was to pick the ball out of the net as Pjanic scored from the resulting free kick after 28 minutes.

Can added the second in the 39th when he was allowed a free header but the game took another twist with Pjanic's dismissal for a second bookable offence -- a handball in midfield -- two minutes after halftime.

Callejon stole in behind Juve defender Giorgio Chiellini to turn in Insigne's inswinging cross in the 61st minute to reduce the gap as Napoli turned the screw.

The hosts swarmed around the Juventus area and were awarded a penalty in the 82nd minute for handball against Alex Sandro, a decision awarded after a VAR review, but Insigne fired the spot kick against the inside of the post.

"I went to sleep because I should have taken Pjanic off after the first yellow card," said Allegri.

"Obviously, sixteen points is a significant advantage but the maths say that we haven't won the championship yet."

Udinese forward Ignacio Pussetto scored late in the game to give them a 2-1 win over hapless Bologna in a key Serie A relegation battle on Sunday.

Rodrigo De Paul put Udinese in front with a penalty in the 25th minute after Pussetto had his shirt tugged but the former Argentina and Inter Milan forward Rodrigo Palacio equalised six minutes before halftime.

Pussetto settled the match in the 79th minute with a free header from a Jens Stryger Larsen cross to hand Sinisa Mihajlovic's Bologna a third defeat in a row.

Bologna are 18th in the 20-team table with 18 points, four adrift of 17th-placed Empoli, while Udinese are 15th with 25 points. The bottom three go down.

Bologna won 1-0 at Inter Milan in Mihajlovic's first game in charge but have taken only one point in four outings since then.

Torino striker Andrea Belotti scored his first goal of the year to set them on the way to a 3-0 win over bottom-of-the-table Chievo (9 points).

Belotti broke the deadlock with a long-range shot in the 76th minute before Tomas Rincon and Simone Zaza added two more goals in stoppage time to take Torino seventh (41 points) and give them an outside chance of Champions League qualification.

Frosinone, one place off the bottom with 17 points, held out for a heroic 0-0 draw at Genoa despite playing for nearly one hour with 10 men after Francesco Cassata was sent off for a second bookable offence in the 34th minute.

Sampdoria's in-form veteran forward Fabio Quagliarella scored two early goals to lead his side to a 2-1 win at SPAL, whose fans walked out in protest after another VAR decision went against them in their Serie A match on Sunday.

Quagliarella got off the mark in style when he met Bartosz Bereszynski's cross with an acrobatic volley in the fourth minute.

The 36-year-old then struck again for eighth-placed Sampdoria seven minutes later with a towering header from Karol Linetty's cross.

Those goals took his league tally to 19, making him Serie A's joint top scorer alongside Cristiano Ronaldo, of Juventus.

Quagliarella was still not finished as he struck the post with a 30-metre drive before halftime.

SPAL thought they had pulled a goal back on the hour after Sergio Floccari headed in from Jasmin Kurtic's free kick but it was ruled out after a lengthy VAR review, seemingly for offside against Andrea Petagna who was judged to be interfering with play.

Two weeks earlier, SPAL had a goal disallowed and a penalty was awarded to opponents Fiorentina instead after officials spotted an infringement in the SPAL area before they broke upfield.

After the latest decision, dozens of hardcore SPAL fans walked out of the stadium in protest, leaving one part of the ground almost deserted.

"We're not having much luck with referees at the moment and there is too much VAR," said SPAL coach Leonardo Semplici.

"It's very unusual to have a goal cancelled out like that."

Kurtic curled in a free kick to pull one back in the fourth minute of stoppage time but SPAL, who are five points above the relegation zone, had defender Thiago Cionek shown a straight red card for denying Gregoire Defrel a clear scoring chance. 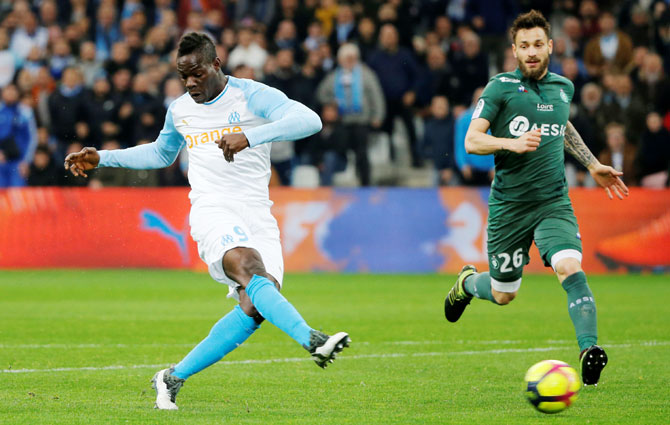 IMAGE: Marseille's Mario Balotelli scores against AS Saint-Etienne during their Ligue 1 match at Orange Velodrome, in Marseille, France, on Sunday. Photograph: Jean-Paul Pelissier/Reuters

Mario Balotelli scored a superbly acrobatic volley and Florian Thauvin added a penalty to give Olympique de Marseille a 2-0 win over a toothless St Etienne on Sunday that lifted them above their visitors and into fourth place in Ligue 1.

Mercurial striker Balotelli held off Loic Perrin and twisted his body to volley the ball home from a corner in the 12th minute, before celebrating by grabbing a cellphone from a photographer in the Stade Velodrome to record the moment.

Thauvin struck the second from the spot nine minutes later following a handball by Mathieu Debuchy, sealing a straightforward win that put Marseille fourth on 44 points, one ahead of St Etienne.

Earlier in the afternoon, Olympique Lyonnais forward Moussa Dembele struck two second-half goals to round off a thumping 5-1 win over visitors Toulouse in their clash at the Groupama Stadium.

Memphis Depay opened the scoring for the third-placed home side after 10 minutes but the lead was short-lived as Matthieu Dossevi put Toulouse back on level terms five minutes later.

Bertrand Traore put Lyon back in front with a bizarre goal on the half-hour, whipping a left-foot effort into the danger area that goalkeeper Baptiste Reynet allowed to fly past him.

Lyon went 3-1 up five minutes later when Nabil Fekir won a penalty which he fired home himself and Dembele's double put the icing on the cake for the hosts.

Lyon are now five points behind second-placed Lille, who won 1-0 at home to Dijon, and 22 adrift of runaway leaders Paris Saint Germain, who have 71 points.

Elsewhere, bottom side Guingamp secured a point with a scoreless draw at home to Nantes while Nice beat Strasbourg 1-0 in a game that saw Nice's Danilo and Strasbourg's Samuel Grandsir both sent off after an ugly 89th minute confrontation. 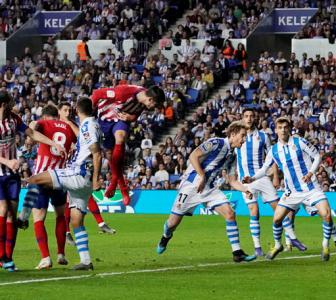 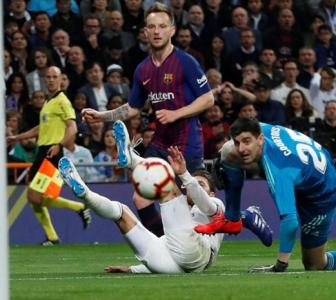 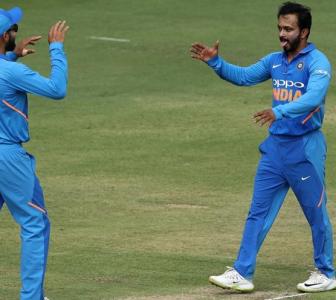 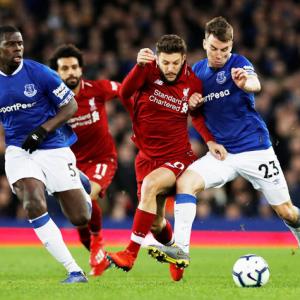 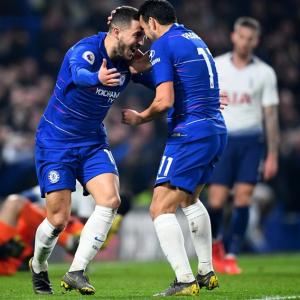