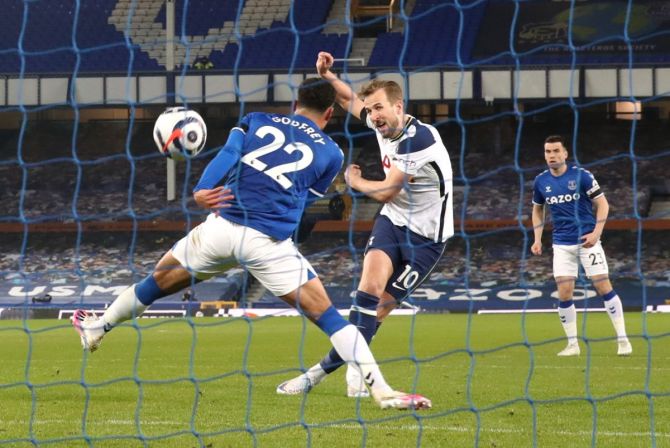 Tottenham Hotspur's Harry Kane moved clear at the top of this season's Premier League scoring charts but his brace in a 2-2 draw at Everton was overshadowed by a late injury on Friday.

Kane took his tally to 21 for the season with a goal in each half but Gylfi Sigurdsson also scored twice for the hosts in a draw that did little for either side's fading top-four hopes.

Worryingly for Tottenham, and England, Kane hobbled off in stoppage time with what appeared to be an ankle injury.

"It is too early to say something. For him to leave the pitch with a few minutes to go is obviously because he felt something," said Tottenham manager Jose Mourinho, whose side play in the League Cup final next weekend.

"Let me be optimistic and believe that he has time to recover. Let's see."

The draw left Tottenham without a win in their last three games and stuck in seventh place, five points behind fourth-placed West Ham United who have played a game less.

Everton's third successive draw left them eighth, a point behind Tottenham but with a game in hand.

Kane began the night level on 19 goals with Liverpool's Mohamed Salah in the race for the Golden Boot.

But he moved clear in the 27th minute when Michael Keane failed to cut out a cross and the ball arrived at Kane who took a touch before drilling a shot past Jordan Pickford.

Tottenham have struggled to hold on to leads throughout the season and this time their advantage lasted all of three minutes as Sergio Reguilon fouled James Rodriguez in the box and Sigurdsson slotted home the penalty.

Everton had good chances to go in front before halftime with Hugo Lloris twice denying Rodriguez.

But Everton's defence again blundered and a mix-up at the back allowed Kane to thump in Tottenham's leveller.

Richarlison should have won it for Everton at the death but he blazed over the bar with the goal at his mercy.

The most significant moment was still to come though as Kane was injured as he challenged for a ball in Everton's area.

He limped off and was replaced by Dele Alli but Tottenham fans will be fearing that he could miss next weekend's Wembley clash with Manchester City.

Leaders Lille dropped two precious points in a tight Ligue 1 title race when they drew 1-1 at home against Montpellier on Friday.

Luiz Araujo's late goal cancelled out Andy Delort's first-half opener for Montpellier as Lille were left on 70 points from 33 games, four ahead of second-placed Paris St Germain who host St Etienne on Sunday.

Montpellier's hopes of clinching a Europa League place faded as they stayed eighth on 47 points.

Gaetan Laborde was played through by Jordan Ferri before his cross was headed home by Delort as the visitors took the lead in the 21st minute.

The hosts piled on the pressure in the second half, but Benjamin Andre's powerful shot from outside the area crashed onto the post in the 57th minute as Montpellier held on.

Omlin pulled another couple of great saves to deny Jonathan Ikone and Jonathan David but there was nothing he could do when Luiz Araujo unleashed a delightful left-footed strike to level with five minutes left.

Lille threatened some more in seven minutes of stoppage time but were not clinical enough to clinch the win.

RB Leipzig squandered the chance to put the pressure on Bayern Munich in the Bundesliga title race as they were held to a 0-0 draw at home by struggling Hoffenheim on Friday.

The hosts thought they had secured a crucial three points deep into stoppage time when Yussuf Poulsen headed in but his effort was ruled out for handball after a VAR check.

Victory would have moved second-placed Leipzig to within two points of Bayern but they were left frustrated.

"It definitely wasn't our best game. Even though we didn't create enough goalscoring chances, we were the more dominant side and were a bit unfortunate at the end with Yussuf Poulsen's header," manager Julian Nagelsmann said.

The hosts barely created a chance before the break and though they livened up in the second half they never really looked threatening against a disciplined Hoffenheim.

Until the late drama Marcel Sabitzer had gone closest to scoring with a left-foot effort that flashed just wide while Tyler Adams glanced a header wide from a great position.

Leipzig poured on late pressure with substitute Alexander Sorloth blasting over and when Poulsen headed home in the 95th minute it seemed the title race was well and truly back on.

But a VAR check showed that his header had brushed his arm before ending in the back of the net.

The draw left Leipzig on 61 points from 29 games, four points behind Bayern who face VfL Wolfsburg away on Saturday.

"We're disappointed, especially after we thought we'd got the last-minute winner," Poulsen said. "If someone else puts the ball over the line after my header, the goal stands.

"But the way it was, was justifiably ruled out. It's tough to take."

Hoffenheim moved up a place to 11th.