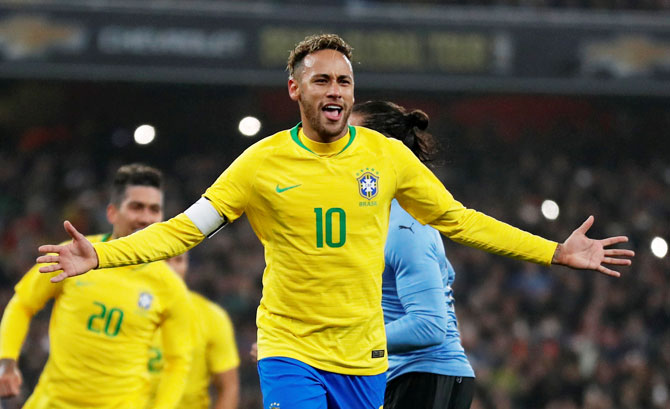 Neymar scored a contested second-half penalty to give Brazil a 1-0 friendly win over Uruguay and bring some joy to their fans on a gloomy Friday at the Emirates Stadium in London.

The forward was again the stand-out Brazil player and he coolly side-footed home his 60th international goal in the 76th minute after Diego Laxalt brought down Danilo, although Uruguay claimed there was a handball in the build-up.

Until then Brazil had looked the more vulnerable of the two sides with Alisson making three fine saves, including a superb stop from a Luis Suarez free kick early in the second half.

It was Brazil's fifth win in a row since they were knocked out of this year's World Cup in the quarter-finals by Belgium.

"It was a tough game. Uruguay are always strong and very competitive," said Brazil midfielder Walace. "We were patient and when the opportunity arose from the penalty spot we deserved the goal."

On a dark and drizzly night at Arsenal's ground in London, the game matched the weather with few bright moments.

Many of the players know each other well from club football and their familiarity was evident in their hugs and smiles before, during and after the game.

There was no lack of commitment, however, as niggly tackles flew in a clash that featured eight yellow cards, including one for Luis Suarez who thought Uruguay should have been given a handball against Danilo before he was felled in the box.

Although the fans had little to cheer, both managers had reason to be happy with youngsters Bruno Mendez and Mathias Suarez starting in defence for the first time for Uruguay and Napoli midfielder Allan making a second-half debut for Brazil.

The South American powerhouses continue their European dates next Tuesday, when Brazil play Cameroon in Milton Keynes and Uruguay take on world champions France in Paris.

A first-half header from defender Ramiro Funes Mori and a second half own goal from substitute Isaac Brizuela gave an experimental Argentina side a 2-0 win over Mexico in a friendly in Cordoba on Friday.

The Villareal centre half opened the scoring a minute before half time when he got his head to a Paulo Dybala free kick as Mexican defenders stood back and watched.

Then Brizuela, who had replaced Miguel Layun only three minutes earlier, put through his own net eight minutes from time to seal a deserved win for the home side.

Both teams were led by interim coaches and Argentina were once again without Lionel Messi, who took a sabbatical from international football after the World Cup finals in Russia.

But it was Lionel Scaloni, in charge after Jorge Sampaoli's short stint ended with a disappointing World Cup, who came out on top to record his third win in five games and his fourth clean sheet.

Scaloni handed debuts to Spurs defender Juan Foyth and Velez Sarsfield midfielder Gaston Gimenez and was delighted with the performances of what was a young and experimental side that included the return of Erik Lamela after injury.

"I am very happy because some players were able to make their debuts today," Scaloni said. "They are adding something and important things come along with them. The young lads have to know that the jersey carries a weight."

Argentina and Mexico meet again in Mendoza on Tuesday.

© Copyright 2020 Reuters Limited. All rights reserved. Republication or redistribution of Reuters content, including by framing or similar means, is expressly prohibited without the prior written consent of Reuters. Reuters shall not be liable for any errors or delays in the content, or for any actions taken in reliance thereon.
Related News: Brazil, Uruguay, Lionel Scaloni, Luis Suarez, Isaac Brizuela
SHARE THIS STORYCOMMENT
Print this article 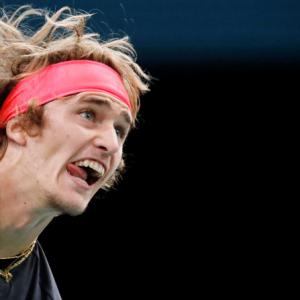