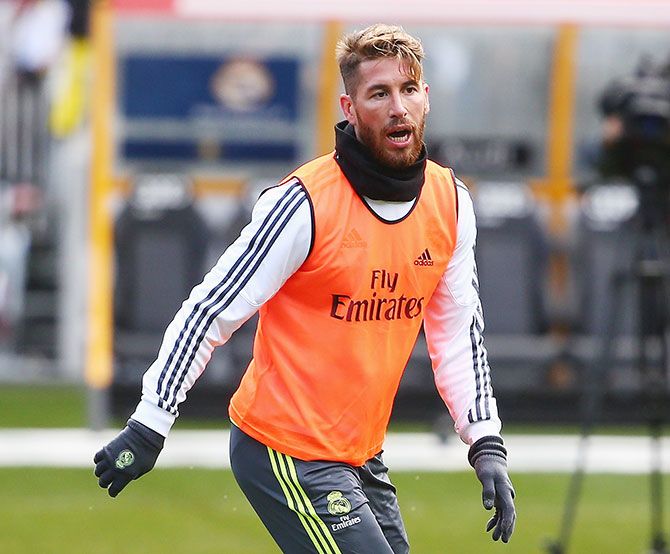 IMAGE: In a television interview after the game against Ajax Amsterdam, Ramos said: "Looking at the result I would be lying if I said it wasn't intentional". Photograph: Robert Cianflone/Getty Images

Real Madrid captain Sergio Ramos has been hit with a two-game European suspension for "clearly receiving a yellow card on purpose", European soccer body UEFA said in a statement on Thursday.

Ramos received a yellow card for a foul on Kasper Dolberg late in his side's 2-1 win at Ajax Amsterdam in their Champions League last-16, first-leg match.

As a result of the booking, the 32-year-old was suspended from next Tuesday's second leg tie.

This, however, reduced his chances of possibly missing a more important match later in the competition, as all bookings are wiped from the quarter-final stage.

In a television interview after the game, Ramos said: "Looking at the result I would be lying if I said it wasn't intentional."

The defender later issued statements clarifying that he meant to say that he had committed the foul on purpose but had not intended to get booked.

UEFA's ruling means Ramos will be suspended from the second leg against Ajax next week at the Santiago Bernabeu and banned from playing in the first leg of a quarter-final tie should the European champions progress to the last eight.

An AS Roma fan who assaulted a Liverpool supporter outside the English club's Anfield stadium last April, leaving him with severe brain injuries, was jailed for three-and-a-half years at Preston Crown Court on Thursday.

Simone Mastrelli, 30, had pleaded guilty to the attack on Sean Cox, 53, before a Champions League semi-final, first-leg match between the two sides.

Judge Mark Brown said during sentencing the Italian, who was extradited last month on a European Arrest Warrant, that Mastrelli had destroyed the life of an innocent man and his family.

AS Roma president James Pallotta, who made a personal donation of 50,000 euros ($56,900) towards the medical and rehabilitation costs, last April described the attack on Cox, an Irish father of three, as "the most disgusting stupidity".

Cox's daughter Shauna said in a victim impact statement to the court that her father had gone to watch the match with his brother but "never came home".

"This violent and unprovoked attack on Dad left him in a dire situation. His future is uncertain and we don’t know how he will progress and that really frightens us," she said.

"The focus now is on getting him the proper care he needs."