IMAGE: PSG's Neymar reacts. PSG's clash with Montpellier has been postponed due to the protests in the French capital. Photograph: Regis Duvignau/Reuters

Paris St Germain have postponed Saturday's top-of-the-table clash against Montpellier amid fears the French capital could be hit by more social protests, the club said on Tuesday.

Police asked the league leaders to call the Ligue 1 game off three days after thousands of people rioted against President Emmanuel Macron and his squeeze on household spending brought about by tax increases on diesel.

Riot police were overrun last Saturday as protesters wrought havoc in Paris's fanciest neighbourhoods, torching dozens of cars, looting boutiques and smashing up luxury private homes and cafes in the worst disturbances the capital has seen since 1968.

PSG lead the French league with 43 points from 15 games and were due to play second-place Montpellier at the Parc des Princes on Saturday evening.

Their next match is away to Strasbourg on Wednesday in a round of midweek fixtures, followd by a Champions League encounter on Tuesday, Dec. 11 with Crvena Zvezda in Belgrade.

"We'll have to manage this situation to stay in shape before Belgrade. Security is absolutely important."

Barcelona midfielder Rafinha will be sidelined for six months after a knee operation, the Spanish champions confirmed Tuesday.

The Brazilian international will miss the remainder of the season after tearing cruciate knee ligaments during the 1-1 La Liga draw at Atletico Madrid on November 24.

"The operation was carried out by Dr. Ramon Cugat under the supervision of the medical services of the club, and he will be out of action for approximately six months," said Barcelona in a statement.

Rafinha's career was previously disrupted by two lengthy absences due to serious knee injuries before this in 2015 and 2017.

It is a major blow for the league leaders in the middle of an injury crisis, with Samuel Umtiti, Luis Suarez, Jasper Cillessen, Sergi Roberto, Thomas Vermaelen, Arthur Melo and Sergi Samper all currently out of action.

Napoli substitute Arkadiusz Milik scored with a sublime volley three minutes after coming off the bench to snatch a late and precious 2-1 win at Atalanta in Serie A on Monday.

Napoli's win, at one of the most difficult venues where third-placed Inter Milan were thumped 4-1 three weeks' ago, cut leaders Juventus's advantage back to eight points.

A typically flowing Napoli move began with Allan playing a long crossfield ball to Mario Rui, who drove a low, powerful ball behind the defence to Milik in the area.

The Pole, who had replaced Dries Mertens, flicked the ball up with his first touch and then volleyed past goalkeeper Etrit Berisha with five minutes left.

It was Milik's fifth league goal of the season, although the 24-year-old has only started seven of Napoli's 14 games.

Arsenal could play minor league side Solihull Moors in the FA Cup third round while London neighbours Tottenham Hotspur may face fellow minnows Southport after Monday's third round draw.

Solihull will host record 13-times winners Arsenal if they beat third-tier Blackpool in a second-round replay and Southport must defeat fourth-tier Tranmere Rovers to welcome Spurs.

Holders Chelsea were drawn at home to second-tier Nottingham Forest and Manchester United, who are just behind Arsenal with 12 FA Cup triumphs, will host Reading at Old Trafford.

Liverpool travel to Wolverhampton Wanderers in an all-Premier League tie while Premier League leaders Manchester City are at home to Rotherham United at The Etihad Stadium. 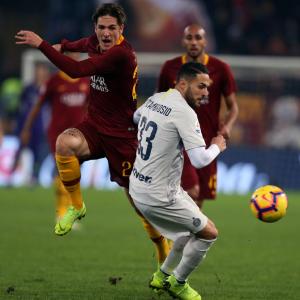