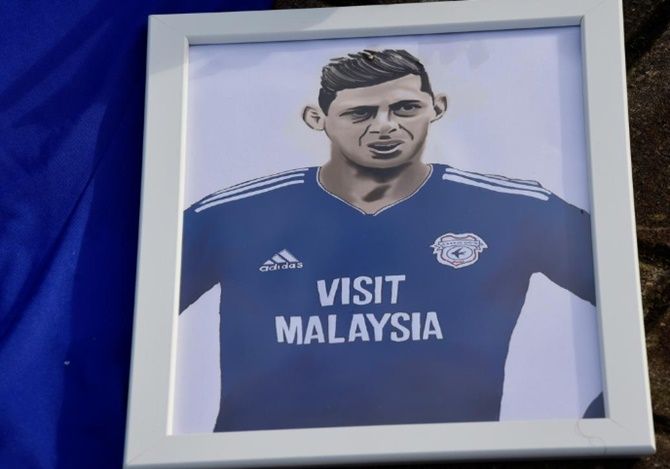 IMAGE: A image of Emiliano Sala is left outside the stadium as tribute. Photograph: Rebecca Naden/Reuters

Rescuers ended their search, on Thursday, for the plane carrying Premier League soccer player Emiliano Sala, which disappeared over the English Channel three days ago, after saying there was little chance anyone aboard the plane had survived.

Sala, Cardiff City's new signing, and the plane's pilot, David Ibbotson, have been missing since Monday night. Rescuers have scoured about 1,700 square miles but have found no trace of the aircraft or those on board.

"We reviewed all the information available to us, as well as knowing what emergency equipment was on board, and have taken the difficult decision to end the search," Guernsey Harbour Master Captain David Barker said in a statement.

"Next of kin have been informed of this development, and my thoughts go out to the family of the pilot and passenger at this most difficult of times."

After the plane disappeared, a recording emerged of a fearful voice message Sala apparently sent in which he expressed concern about the single-engine Piper Malibu aircraft he was flying in.

The 28-year-old Argentina-born forward was en route from Nantes in western France to make his debut for Welsh team Cardiff City.

Barker said the search had involved 80 hours combined flying time by three planes and five helicopters, with two lifeboats and other ships in the area also helping.

"Although we are no longer actively searching, the incident remains open and we will be broadcasting to all vessels and aircraft in the area to keep a look out for any trace of the aircraft. This will continue indefinitely," he said.

Juve's Higuain to Chelsea on loan IMAGE: Higuain joins Chelsea after his year-long loan spell with AC Milan was cut to less than six months. The deal reunites the striker with Chelsea boss Maurizio Sarri, who was manager of Napoli when Higuain was at the club. Photograph: Marco Luzzani/Getty Images

Chelsea have completed the signing of Argentina striker Gonzalo Higuain, who will join the club on loan from Juventus until the end of the season, the Premier League club said on Wednesday.

Higuain joins Chelsea after his year-long loan spell with AC Milan was cut to less than six months. The deal reunites the striker with Chelsea boss Maurizio Sarri, who was manager of Napoli when Higuain was at the club.

"When the opportunity to join Chelsea presented itself I had to take it. It’s a team I’ve always liked that has a lot of history, a wonderful stadium and they play in the Premier League, a league I’ve always wanted to play in," Higuain said in a statement on the Chelsea website.

"I now hope I can give back that trust Chelsea have shown me out on the pitch. I can’t wait to start and I hope to adapt as soon as possible."

The deal, however, has come too late for him to face Tottenham Hotspur in the League Cup semi-final, second leg on Thursday.

The 31-year-old did not sign before Wednesday's midday deadline and cannot therefore play against Spurs at Stamford Bridge in a match Chelsea trail 1-0 from the first leg.

Higuain's spell at Milan started with six goals in seven games but he has only scored once in his last 12 appearances.

Sarri hopes he will rediscover the form that saw him score 38 times in their final season together at Napoli in 2015-16.

"He has had some difficulties recently, but we're hoping we can raise him back to his best form," Sarri told reporters on Wednesday.

"He's still scored eight goals in a team that isn't at the same level as Juventus.

"He's a very strong striker. Especially in my first season in Naples. He scored 36 goals in 35 matches in Serie A. For sure, he is one of the best strikers in my career."

Asked if the arrival of Higuain was a sign that the club are behind him, Sarri said: "I hope so. I think the club agree with me when I told them my opinion about the team.

"The January market is very difficult, especially for a striker. It's very difficult in January to find one of the most important strikers in the world."

Chelsea are in the fourth and final Champions League qualifying spot in the Premier League standings, three points ahead of Arsenal who beat them 2-0 on Saturday.

Higuain moved to Milan from Juventus on loan in August in a complex three-way deal which also saw defender Mattia Caldara move from the Turin side to the seven-times European champions and Leondardo Bonucci move in the other direction.

Milan paid 18 million euros (16.03 million pounds) for a one-year loan with an option to buy when Higuain became surplus to requirements at Juventus following their signing of Portuguese forward Cristiano Ronaldo.

After joining Juventus from Napoli in 2016, Higuain won Serie A and Coppa Italia titles in each of his first two seasons with Juve and netted 55 goals in 105 appearances in all competitions, including 40 in 73 Serie A outings.

He told Gazzetta dello Sport in an interview in October that he was "sent away" by Juventus and had not wanted to leave, although there were no hard feelings.

Deprived of the service he enjoyed at Juventus and previously at Napoli, he scored only eight goals in 22 appearances for Milan -- well below his usual prolific best.

Higuain has faced criticism that he fails to make an impact on the big occasion.

He is often remembered for the miss in the 2014 World Cup final against Germany where a mistake left him with only goalkeeper Manuel Neuer to beat and he fired wide of the goal. Argentina went on to lose the match 1-0 after extra time.

Ritsu Doan scored a second-half penalty awarded by the newly-introduced video assistant referee (VAR) to give Japan a 1-0 win over Vietnam in the quarter-finals of the Asian Cup on Thursday.

FC Groningen's Doan drove the ball into the bottom left corner, beating Vietnam's Russian-born goalkeeper Dang Van Lam who had guessed the right way after the spot kick was awarded in dramatic fashion shortly before the hour mark.

Appeals for a foul on Japan's Maya Yoshida in the box were initially dismissed by the referee, only for him to change his mind after a VAR review, with the technology being introduced into the tournament from the last-eight stage onwards.

Japan survived a late onslaught from the Vietnamese with Nguyen Cong Phuong in particular missing an opportunity to equalise in the 89th minute when he found himself unmarked just outside the box but blasted the ball over.

AC Milan have signed Krzysztof Piatek from Genoa after the Polish striker scored 19 goals in 21 appearances following his move from Cracovia in July.

Milan said in a statement on their website that the 23-year-old, who was little known before his move to Genoa in July, had been given a contract until June 2023.

The announcement came shortly after it was confirmed that misfiring striker Gonzalo Higuain was cutting short his one-year loan to Milan from Juventus to join Chelsea.

The Argentine was a huge disappointment at San Siro, managing eight goals in 22 appearances, well short of his usual scoring rate.

"AC Milan is delighted to announce the acquisition of Krzysztof Piatek from Genoa Cricket and Football Club," said the club in a statement.

Milan are fourth in Serie A with 34 points, putting them on course for their stated goal of qualifying for the Champions League, although in terms of points, they are closer to SPAL in 16th place (18 points) than leaders Juventus (56).

Piatek made his professional debut with Zaglebie Lubin and joined Cracovia in 2016. He scored 32 goals in 65 league appearances for the Krakow-based club including 21 last season when he finished as the Polish league's third highest scorer.

He made an immediate impact with Genoa as he scored in each of his first seven Serie A appearances and currently has 13 league goals, one behind joint topscorers Cristiano Ronaldo, Duvan Zapata and Fabio Quagliarella.

He has made two appearances for Poland, both since the World Cup, and scored his first goal in the 3-2 Nations League defeat to Portugal.

Paris St Germain's Neymar was substituted in tears after suffering what appeared to be a right ankle injury as they beat Racing Strasbourg 2-0 in a French Cup, last 32 game on Wednesday.

The Brazil striker left the pitch after an hour after receiving a knock and twisting his ankle, three weeks before PSG travel to Manchester United for their Champions League last-16 first leg.

PSG, who are runaway leaders in Ligue 1, are already sweating on the fitness of key midfielder Marco Verratti, who is suffering from an ankle injury.

Thomas Tuchel's side prevailed at the Parc des Princes thanks to a goal in each half from Edinson Cavani and Angel Di Maria.

Elsewhere, St Etienne slumped to a 6-3 home defeat to Dijon.

Crystal Palace goalkeeper Wayne Hennessey has been charged by the English Football Association (FA) after making an alleged Nazi salute in a group photo with team mates.

Wales international Hennessey was pictured with his right arm in the air in a photo posted on Instagram by Palace's German midfielder Max Meyer.

The 31-year-old has denied making such a salute and said on Twitter that he was calling out the person taking the photograph.

The FA alleges the action breached its rules relating "abusive, insulting or improper conduct and brings the game into disrepute".

It is alleged Hennessey's action also constitutes an "aggravated breach" under the FA rules because it included reference to ethnic origin, race, religion or belief.

Hennessey has until January 31 to respond to the charge.

Beckham to take stake with 'Class of '92' in Salford City

Former England midfielder David Beckham will take a 10 percent share in non-league club Salford City, joining up with his former 'Class of '92' Manchester United team mates in the project, the club said on Wednesday.

Beckham will join Gary and Phil Neville, Ryan Giggs, Nicky Butt and Paul Scholes alongside businessman Peter Lim who will remain the largest shareholder with the remaining 40 percent.

Salford are currently third in the National League, the fifth-tier division, having been taken over by the former United players in 2014. Gary Neville said the club's aim was to emulate the model of Bournemouth, who rose from the fourth tier to the Premier League on the back of a modest following.

The 43-year-old Beckham was the only member of the famous group of young players, who enjoyed so much success under Alex Ferguson, not to have invested in the team.

"It's a really special club and a special group of people. My early years in Manchester were all spent in Salford. I grew up there in many ways so to be able to finally join the lads and the club today is a great feeling," Beckham said in a club statement.

Beckham must undergo the Football Association's "fit and proper ownership" test after the club submitted documentation on his involvement to the governing body.

"When the lads got involved in Salford we spoke about us all getting involved. Now I'm able to get involved now Miami is set up," he said.

"What I've seen them do with the club and the stadium, it's special. We all have ambitions and goals and we’ve got to have big ones."

Former United captain Gary Neville, now a television pundit, heads the group of players and told a news conference that none of them take a "hands on" role in the club.