News
Business
Movies
Sports
Cricket
Get Ahead
Money Tips
Shopping
Sign in  |  Create a Rediffmail account
Rediff.com  » Sports » It's the time to Diski at the World Cup in South Africa!

It's the time to Diski at the World Cup in South Africa!

Forget famous goal celebrations such as 'The Robot' by Peter Crouch and 'The Dive' by Juergen Klinsmann, here comes the South African 'Diski dance'. 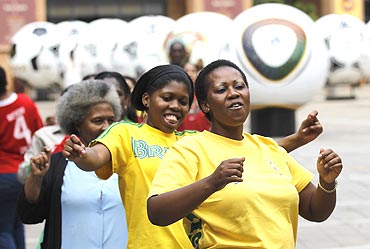 The Diski dance, which is performed through heading and kicking an imaginary ball, may be a goal celebration to watch in this World Cup.

South Africa's Siphiwe Tshabalala and his team mates displayed this distinctive dance when they celebrated his goal against Mexico in the opening World Cup game on Friday.

The dance is already popular on YouTube and many soccer fans may want to learn the moves.

US actor John Travolta performed the dance shortly after landing his Boeing 707 at Lanseria airport, north of Johannesburg, on Wednesday morning.

Goal celebrations are now part of the biggest sporting event and players plan them in advance just in case they find the back of the net.

The Robot goal celebration was so popular that England fans were dismayed when Crouch declared he "wouldn't be doing it any more unless England won the World Cup."

Another popular celebration is 'The Snort' by Robbie Fowler reacting to claims that he was a cocaine addict by sniffing imaginary cocaine off the lines on the pitch.

The word Diski is a township slang for soccer and may also describe the local style of football which focuses on dribbling and other tricks.

© Copyright 2021 Reuters Limited. All rights reserved. Republication or redistribution of Reuters content, including by framing or similar means, is expressly prohibited without the prior written consent of Reuters. Reuters shall not be liable for any errors or delays in the content, or for any actions taken in reliance thereon.
Related News: Diski, Cameroon Roger Milla, South Africa, John Travolta, Peter Crouch
COMMENT
Print this article