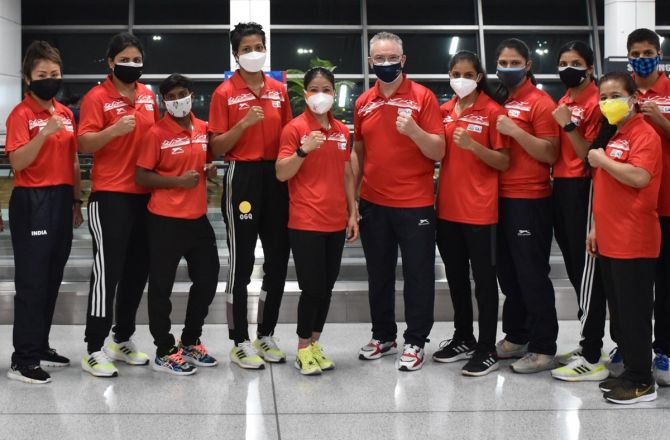 The Indian boxing team, featuring the likes of M C Mary Kom (51kg) and Amit Panghal (52kg), reached Dubai to compete in the Asian Boxing Championships aboard an "air-bubble" flight, which had to stay mid-air longer than scheduled as administrative paperwork delayed its landing.

The tournament starts on Monday with the draws lined up for Sunday. It is the only major competition that the boxers will get before the July-August Olympics given the COVID-19 restrictions in place around the globe.

The team reached Dubai on Saturday after being held up for over two hours in the flight, of which close to one hour was mid air, because of a delay in the clearance of paperwork which approved the team's arrival in Dubai.

"There was some confusion regarding the approval letter for the trip which was eventually sorted thanks to the intervention of the Indian Embassy in the UAE. The flight took a while to land but the boxers have now reached their hotel," a source close to the team said.

The approval was required as the UAE has imposed a ban on flights from India in view of the heavy COVID-19 caseload.

The Boxing Federation of India issued a statement, thanking the Indian ambassador to the UAE for his assistance but did not get into details of what caused the delay in the flight's landing.

"Indian contingent has landed in Dubai and reached the hotel. Two rounds of RT-PCR test have been conducted -- one at the airport and the other at the hotel. Indian team flew on SpiceJet flight under the air bubble agreement with all necessary and relevant permissions," the statement read.

"Boxing Federation of India is grateful to the Indian Embassy and Ambassador Mr Pavan Kapoor for his help in ensuring the contingent's participation at the 2021 ASBC Asian Championships. We are also thankful to the Asian Boxing Confederation and the UAE government," it added.

The 10-strong women's team is being led by the redoubtable M C Mary Kom (51kg) along with three other Olympic-bound boxers -- Simranjit Kaur (60kg), Lovlina Borgohain (69kg) and Pooja Rani (75kg).
Two Olympic-bound names missing from the men's team are Manish Kaushik (63kg) and Satish Kumar (+91kg), both of whom are currently recovering from COVID-19. A total of five men have qualified for the Tokyo Games in July-August.

Apart from India, Indonesia, Iran, Kazakhstan, South Korea, Kyrgyzstan, Philippines, and Uzbekistan are among the prominent countries which will compete at the continental showpiece.