India's men's will take on traditional powerhouse China in their last group match on Wednesday. 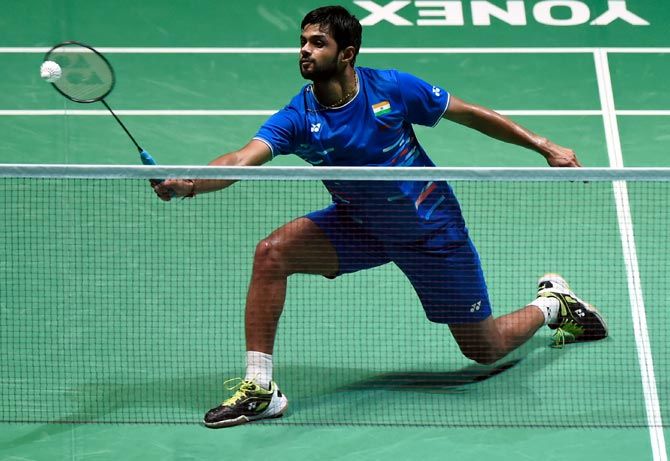 India’s men’s team proved too strong for Tahiti, winning 5-0, to enter the quarter-finals of the Thomas Cup badminton for the first time since 2010, but the women's team suffered a crushing 0-5 defeat to Thailand in its last Group B match, in Aarhus, Denmark, on Wednesday.

It was the first defeat for the Indian women after beating Spain (3-2) and Scotland (4-1).

The team has already made it to the quarter-finals.

The men's team, on Tuesday, registered its second straight 5-0 win in Group C, having beaten the Netherlands by an identical margin on Sunday.

The last time the Indian men entered the quarter-finals of the tournament, it lost to Indonesia.

In the Uber Cup, the women's team wrapped up its Group B engagements with a drubbing at the hands of Thailand.

India needed to win the doubles match but Ashwini Ponappa and Sikki N Reddy went down 16-21, 12-21 to Jongkolphan Kititharakul and Rawinda Prajongjai.

For India to stay alive, it was imperative for Aditi Bhatt to win the next singles.

Tasnim Mir took the court with an aim to avoid a whitewash but lost 19-21, 15-21 to Supaninda Katethong.

Tasnim had a good chance to win the first game as she led 17-14, but lost points in a jiffy and let slip the advantage.

Meanwhile, Tuesday's win over Tahiti ensured that India’s men's team will finish in the top-two of the four-team Group C.

India will take on traditional powerhouse China in their last group match on Thursday.

B Sai Praneeth began the proceedings with a 21-5, 21-6 win over Louis Beaubois in just 23 minutes.

Kiran George sealed the tie with a 21-4, 21-2 thrashing of Elias Maublanc in the third men's singles that got over in only 15 minutes.

In the inconsequential doubles matches, the pair of Krishna Prasad and Vishnu Vardhan scored a 21-8, 21-7 win before Satwiksairaj Rankireddy and Chirag Shetty beat Maublanc and Heiva Yvonet 21-5, 21-3.