- If the American is fit and firing, it is hard to see left-hander Safarova being able to cope with her power and the occasion simultaneously.

- 'Serena is number one in the world, a great player. I will just go there and play my game and obviously try to get the trophy' Serena Williams is overwhelming favourite to win her third French Open on Saturday but after a tournament of surprises and an untimely bout of illness for the American, Czech Lucie Safarova will sense a rare opportunity.

World No 1 Williams, 33, could not practise on Friday, still suffering from an illness that left her coughing and spluttering during her three-set semi-final win over Swiss Timea Bacsinszky.

Thirteenth seed Safarova, meanwhile, warmed up for the biggest day of her career by winning the women's doubles title alongside American partner Bethanie Mattek-Sands.

Williams has laboured to the final, losing the first set in four of her six matches against opponents with an average world ranking of 67.

Yet in a tournament where high seeds were scattered liberally by the Paris winds, she survived, showing the hunger to add to her 19 career Grand Slam singles titles is insatiable. Safarova, on the other hand, arrived in her maiden Grand Slam final without dropping a solitary set and her six opponents, including defending champion Maria Sharapova in the fourth round, had average rankings of 24.

That is where the good news ends, though, for the 28-year-old Czech whose six career titles are dwarfed by the 66 belonging to the woman who will be on the other side of the net on Saturday.

She has lost all eight previous meetings with Williams, 16 of the 19 sets they have contested and the last time they met in a final, three years ago in Charleston, she lost 6-0 6-1.

"It's first time for me, so it's kind of new," Safarova told reporters.

"I mean, Serena is number one in the world, a great player. I will just go there and play my game and obviously try to get the trophy." 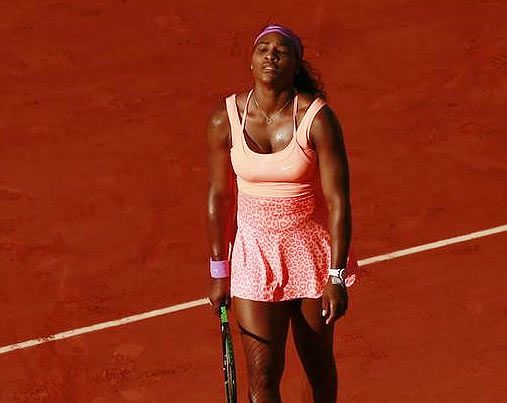 The outcome, as it usually is when Williams is playing, will largely be decided by her racket.

If the American is fit and firing, it is hard to see left-hander Safarova being able to cope with her power and the occasion simultaneously.

Williams, winner in Paris in 2002 and 2013, not only has another French Open crown to win, she also has Steffi Graf's professional era record of 22 Grand Slam titles within reach.

Should she win on Saturday she would be only two behind and with Wimbledon and the U.S. Open to come -- a calendar year slam would start to look a distinct possibilty.

© Copyright 2022 Reuters Limited. All rights reserved. Republication or redistribution of Reuters content, including by framing or similar means, is expressly prohibited without the prior written consent of Reuters. Reuters shall not be liable for any errors or delays in the content, or for any actions taken in reliance thereon.
Related News: Serena Williams, Lucie Safarova, USA, Timea Bacsinszky, American
COMMENT
Print this article