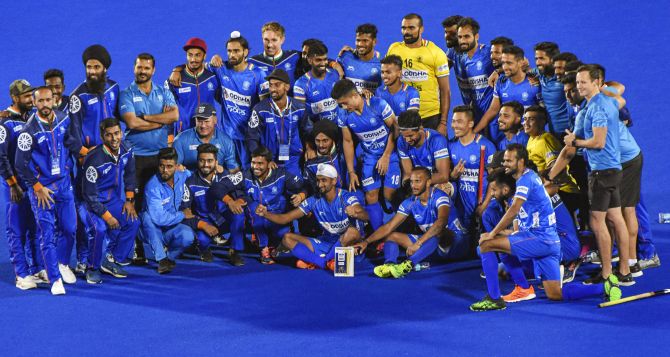 IMAGE: A jubilant Indian team pose for pictures after their victory over Netherlands in the FIH Pro League (Men) 2020 hockey match at Kalinga Stadium in Bhubaneswar on Sunday. Photograph: PTI

India made a dream debut at the FIH Pro League, beating world number three Netherlands 3-1 in the shoot-out after both the teams were locked 3-3 at the end of regulation time in the second match of the two-leg tie in Bhubaneswar on Sunday.

World No 5 India had earlier defeated Netherlands 5-2 in the opening match of the tie on Saturday.

India are now atop the leaderboard with five points from two games, but the Manpreet Singh-led side conceded a point to the Netherlands after drawing (during the regulation time) the second match of the contest on Sunday.

As per the new rules implemented by the International Hockey Federation (FIH) in the second edition of the Pro League, every match of a tie has to produce a result.

In case of a draw, the match would be decided by a shoot-out and the side which wins will garner two points and the losing team will get one point.

In the shoot-out, Vivek Sagar Prasad, Akashdeep Singh and Gujrant Singh were on target for the Indians but Harmanpreet Singh and Rupinder missed.

Mirco Pruijser was the lone scorer for the Dutch as Glenn Schuurman, Thierry Brinkman and Jeroen Hertzberger missed their targets during the shoot-out.

The Indians started from where they left on Saturday and created a lot of chances from the beginning but it was Netherlands who stunned the capacity crowd by taking the lead in the second quarter.

Netherlands took the lead when Van der Weerden converted a penalty corner, flicking into the roof of the net from the top of the circle in the 23rd minute.

The Indians bounced back within minutes when Lalit scored from close range to level the scores.

But India's joy was short-lived as Netherlands restored their lead a minute later through Hetrzberger, who scooped home from close range.

To make matters worse for the hosts, the Netherlands extended their lead a minute later when Kellerman fired home from close range to go into half time with a commanding 3-1 lead.

After the change of ends, India pushed hard in search of goals and in the process created a few bright chances, including a few penalty corners but to no avail as the third quarter yielded no goal.

Trailing by two goals, India continued to step up the pressure on the Netherlands defence and finally managed to beat it in the 51st minute when Mandeep fired from a rebound from a penalty corner.

India continued in the same vein and within three minutes secured another penalty corner which was dully converted by Rupinder to level the scores.

Thereafter, both the teams pressed hard for the winner and the Dutch came close two minutes from the final hooter when they secured another penalty corner but it was well defended by the Indians as the match went into shoot-out.

After the Netherlands, India will host world champions Belgium on February 8 and 9 followed by two more home ties against Australia on February 22 and 23.

The Indian team will then leave for the away games in Germany (April 25 and 26) and Great Britain (May 2 and 3).

India will return to play on home soil on May 23 and 24 against New Zealand before travelling to Argentina to play on June 5 and 6.