FIFA President Sepp Blatter speaks after he was re-elected at the 65th FIFA Congress in Zurich. Photograph: Ruben Sprich/Reuters

FIFA President Sepp Blatter began his fifth term at the helm of football's governing body on Saturday facing the daunting task of restoring public faith in an organisation tainted by allegations of corruption and deeply divided over his re-election.

The 79-year-old Swiss comfortably won Friday's vote at a FIFA congress in Zurich, having secured the support of blocks of votes from Asia and Africa which outweighed dissenters including Europe's powerful football body UEFA.

The victory came two days after news broke of a major bribery scandal being investigated by U.S., Swiss and other law enforcement agencies that plunged FIFA into the worst crisis in its 111-year history.

Blatter has not been implicated in any wrongdoing, but having ruled over FIFA since 1998 since when it has regularly been subject to suspicions of corruption and internal probes, his critics have argued it was time for him to step down.

His supporters welcomed the outcome of a vote that pitted the veteran incumbent against a sole challenger, 39-year-old Prince Ali bin Al Hussein of Jordan.

"The AFC (Asian Football Confederation) has always supported the FIFA President and we are happy to continue working with him and FIFA to further develop Asian and world football into the future," Asian football chief Shaikh Salman bin Ebrahim Al Khalifa said on Saturday. 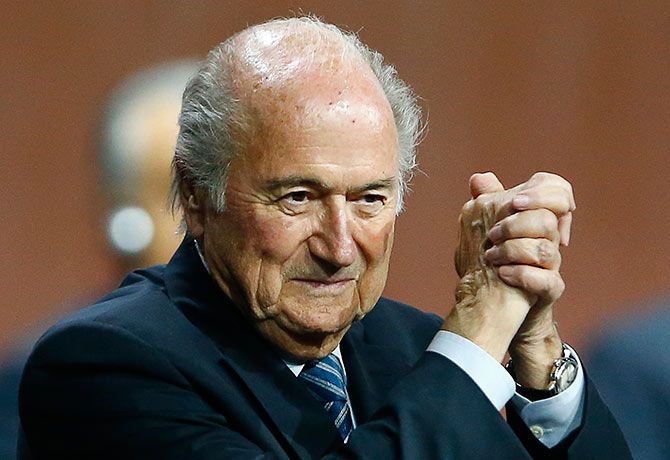 President Sepp Blatter gestures after he was re-elected at the 65th FIFA Congress in Zurich. Photograph: Arnd Wiegmann/Reuters

His support reflects Blatter's success in expanding FIFA's membership away from football's heartlands and in exploiting resentment in Africa and Asia over the perceived arrogance of the game's powerhouse nations in Europe and South America.

Despite Blatter's re-election, the scandal surrounding the investigations into corruption looks set to rumble on.

UEFA president Michel Platini, who called on Blatter to step down, has raised the possibility, albeit slim, of Europe boycotting the World Cup tournament, football's showcase played every four years.

There has also been talk of UEFA breaking away from FIFA, which is also unlikely, but nothing can be ruled out.

"I cannot see FIFA reforming itself under Blatter. He's had 16 years to reform it but he hasn't done it," Dyke told Sky News. "This is the beginning, not the end. I think there is a lot more of this to play out." Blatter's future could yet depend on the reaction of FIFA's major sponsors and stakeholders who have been dismayed by the dawn arrests in Zurich on Wednesday of several FIFA officials and U.S. prosecutors announcing indictments of officials and companies.

A senior U.S. Internal Revenue Service official said on Friday he thought there would be further indictments, the New York Times reported.

"I'm fairly confident that we will have another round of indictments," Richard Weber, the chief of the IRS unit in charge of criminal investigations, was quoted as saying. He declined to identify the remaining targets of the investigation.

One top sponsor, Anheuser-Busch, the maker of Budweiser beer, said after Blatter's win: "We expect the next FIFA presidency to resolve internal issues, install positive change and adhere to strong ethical standards and transparency." Sepp Blatter (right) reacts after he was re-elected at the 65th FIFA Congress in Zurich. Photograph: Ruben Sprich/Reuters

Swiss prosecutors are investigating the award of the World Cup finals to Russia in 2018 and Qatar in 2022, decisions that have deepened rifts within FIFA.

The choice of Qatar, a small desert state where summer daytime temperatures rarely fall below 40 degrees Celsius, was especially contentious and went against the advice of FIFA's own technical committee.

Russia and Qatar deny wrongdoing in their bids to host the prestigious tournament, and Russian President Vladimir Putin has accused the United States of meddling in an effort to force Blatter out.

When asked after the vote if he could guarantee the next World Cup would still be staged in Russia, FIFA's secretary general Jerome Valcke told reporters: "Yes, yes. I mean now today, if you ask me the question at twenty to eight, yes the World Cup will be played in Russia and Qatar."

Away from the crisis engulfing football's administration, preparations for the Women's World Cup, which opens in Canada on June 6, continued with a friendly between the hosts and England before a sellout crowd in Hamilton, Ontario.

"For these women, it is not about the money, it's about the game, it renews your faith," said England supporter Kevin Mackowski. "And it's good soccer, it's a truly beautiful game."