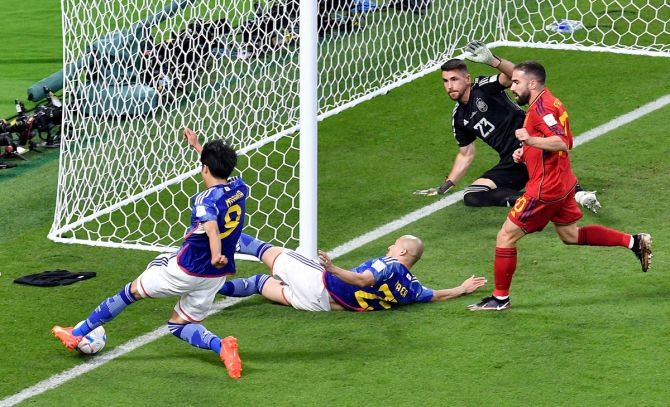 England's fiercely disputed third goal in the 1966 World Cup final was often cited as the kind of incident VAR would erase from the game forever but Japan's victory over Spain on Thursday triggered a new "was it over the line?" debate.

Kaoru Mitoma's cutback for Ao Tanaka to give Japan a 2-1 lead was initially adjudged by South African referee Victor Gomes to have been from outside the field of play but the official reversed his decision after a lengthy VAR consultation.

TV and still pictures immediately swamped the internet apparently showing clear green grass between the ball and the line before winger Mitoma was able to play it back to his teammate.

FIFA issued a statement on Twitter late on Friday accompanied by several videos and graphics that said the officials had used the goal-line camera images to make the call.

"Other cameras may offer misleading images but on the evidence available, the whole of the ball was not out of play," it added.

The videos and graphics illustrated that while the laws require a part of the ball to be on the line to remain in play, that does not mean it has to be touching the ground as the curvature of the ball overhanging the white stripe also counts.

As with England striker Geoff Hurst's strike at Wembley 56 years ago, the country which the decision affected most was Germany, who would have progressed to the last 16 if the Japan-Spain match had finished in a 1-1 draw but instead went home.

FIFA have invested heavily in VAR technology since introducing it at the World Cup four years ago in Russia.

The match ball now contains a chip that transmits data to the VAR operations room 500 times a second, while 12 cameras in each stadium track 29 points on the body of each player.

A simulation of offside decisions is later displayed in the stadium and to TV viewers but, unlike in the English Premier League, fans cannot see the images the VAR officials are considering or hear their deliberations.

"There are 80 million Germans right now going mad, waiting for a picture that shows that ball didn't go out of play," he told ITV.

"Why would you create confusion and not want to clear it up immediately?"

While most will accept the evidence when and if it is produced, others are concerned about how VAR is being used at this World Cup to overturn marginal calls made by referees over incidents that technology was not previously involved in.

Two of the highest-profile penalties at the tournament, involving Portugal's Cristiano Ronaldo and Argentina's Leo Messi, were highly debatable calls, one initially given and one waved away by the referee.

Robert Wurtz, considered by many to be the best Frenchman ever to have wielded a whistle, said FIFA risked fatally undermining match officials.

"When I have to decide on a penalty in the fifth minute and I say 'It's a penalty', and then VAR tells me 'No, it's not a penalty', then my authority is gone," the 80-year-old told L'Alsace newspaper.

"So how can I have the respect of the players for the remaining 85 minutes?"

That is all the more a possibility when decisions are highly technical and subjective, such as ruling on whether a defender made a "deliberate play" at the ball and therefore played an opponent onside or not.

In chaotic scenes at the end of France's last group match against Tunisia, Antoine Griezmann had a late equaliser ruled out by VAR because a defender's header was ruled not to be deliberate.

Wurtz also gave voice to the argument against the increasing use of technology in officiating on aesthetic grounds, a case in point after the Griezmann goal was scratched only after the final whistle had been blown.

"When you see a goal and the crowds are hugging, celebrating and then you look at it from every angle to end up saying 'No, there's no goal'," he said.

"Where is the dramatic intensity that you have in an opera or in a Greek tragedy? Now we want to correct everything. That's not the kind of football that I like, which is like a beautiful play." 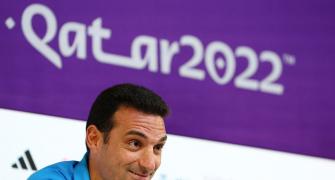 FIFA WC: Argentina tired but will break backs to compete 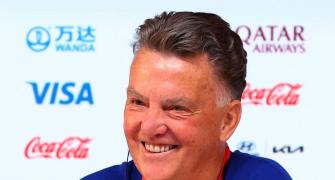 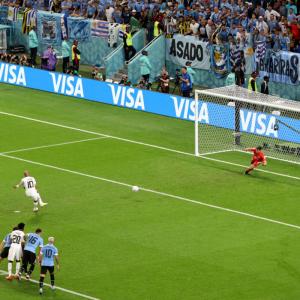 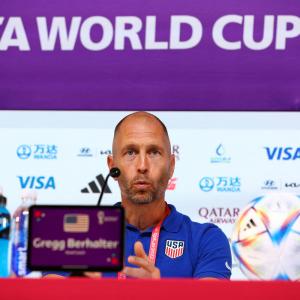