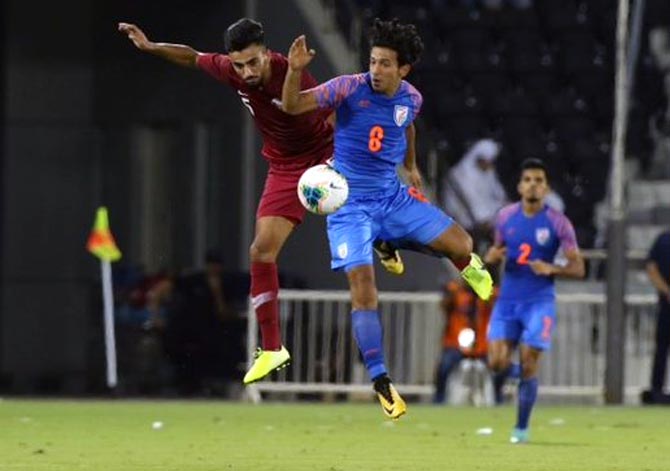 IMAGE: The young Indians denied Qatar, who won the Asian Cup title in January, any goal despite the home side having more than one dozen shots on target. Photograph: AIFF Twitter

A gritty India survived waves of attacks from Qatar to hold the reigning Asian champions to a goalless draw to steal an unexpected point from their away match of the FIFA World Cup qualifiers in Doha on Tuesday.

Despite playing without talismanic captain Sunil Chhetri, who was laid low by fever, the young Indians denied Qatar any goal despite the home side having more than one dozen shots on target.

Indian goalkeeper Gurpreet Singh Sandhu, who also wore the captain's armband, was the star of the visiting side as he single-handedly stopped the Qataris from scoring in the Group E match which will be remembered for long.

It was, no doubt, one of the best results by India in recent times.

India, who had suffered a heartbreaking 1-2 loss to Oman in their opening match on September 5 in Guwahati, now have one point from two matches while Qatar have four points as they had beaten Afghanistan 6-0 in their first match in Doha.

The two sides had played just one official senior match before Tuesday and Qatar had won 6-0 in September 2007 in the 2010 World Cup qualifiers.

India next play Bangladesh on October 15 in Kolkata.

In what was a completely one-sided match, Qatar was doing all the attacking and the Indians defending in their half for most part of the match.

Qatar, ranked 62nd in the world, had more than two dozen shots on goal out of which at least a dozen were on target. India, 103 in the latest FIFA rankings, on the other hand, had just two shots on the opposition goal in the entire match.

To the credit of the Indians, they defended brilliantly, maintained their shape throughout and did not give space to the speedy Qatari attackers.

In the first half, India expectedly sat deep and defended their citadel. The home side had at least half a dozen on-target shots and seven corners in the first half while India did not have any.

Sandhu was kept busy as he was called into action several times but he remained unbeaten.

Qatar captain Hassan Al-Haydos had two shots early into the match but Sandhu was up to the task, making many saves, including a brilliant finger-tip save in the 20th minute.

A mispass from Mandar Rao Desai in the 14th minute just outside the penalty box fell at Abdul Aziz Hatem feet, but his curling strike flew just above the crossbar.

A free header off Boualem Khoukhi in the 26th minute was also off the target as India escaped unscathed in the first half.

The second half saw India opening up a bit and they were seeing more of the opposition goal than the first half but still could not get a clear goal-bound shot.

Sahal Samad was brilliant in the midfield as he, on a few occasions, got the better of his opponents and sent fine passes to the likes of Udanta Singh.

India got their first corner in the 66th minute. Anirudha Thapa delivered a long corner and Sahal took a left-footed half volley from just outside the box which flew inches away from the right post.

Igor Stimac made four changes to his side from the eleven that started in their 1-2 defeat against Oman. Chhetri was left out as he was suffering from fever. Ashique Kuruniyan had a slight niggle and therefore Nikhil Poojary took his place. Brandon Fernandes and Subhasish Bose were replaced by Sahal Samad and Mandar Rao Desai.

Qatar head coach Felix Sanchez, on the other hand, made two changes to the line-up that started against Afghanistan whom they had beaten 6-0. Akram Afif and Karim Boudiaf were forced out due to injuries and they were replaced by Bassam Hisham and Abdul Aziz Hatem.

Iran made a winning start to qualifying for the 2022 World Cup with a 2-0 victory over Hong Kong on Tuesday while Brazil-born striker Elkeson scored twice on his debut for China in a 5-0 win over the Maldives.

Seeking a sixth World Cup appearance and third in a row, Iran picked up maximum points in their Group C opener after seeing off a determined and defensive Hong Kong, whose jeering fans drowned out the Chinese national anthem before kick off.

Sardar Azmoun gave Iran the lead midway through the first half with a low volley into the bottom corner before Karim Ansarifard secured the win with a side-footed finish nine minutes after the break.

"We gained three points from this match, so I think it was a positive result," said coach Marc Wilmots, who was taking charge of his first competitive game for Iran.

"We encountered a wall of defence from the Hong Kong team but we were able to score two goals and had opportunities to score more.

"This is the beginning of our preparations and we will get better day-by-day."

Iran are a point behind group leaders Bahrain, who won away to Cambodia 1-0, but have played one game more.

Elkeson made his debut for China after switching nationality and the Guangzhou Evergrande striker scored twice -- including one from the penalty spot -- as Marcello Lippi's side eased to victory over the Maldives in Male in Group A.

The Chinese are now level on three points with the Philippines, who bounced back from their opening-round loss against Syria to thrash Guam 4-1.

Japan, another of Asia's World Cup regulars, also picked up a 2-0 win as goals from Shoya Nakajima and Takumi Minamino were enough to see off Myanmar in Yangon in Group F. Tajikistan top the group after they picked up a second straight win with a 1-0 victory in Mongolia.

In Group G, the United Arab Emirates fought back from going a goal down after 33 seconds to defeat Malaysia 2-1 in Kuala Lumpur thanks to a brace from Ali Mabkhout.

Bert van Marwijk's side join the Malaysians on three points and trail group leaders Thailand by a point after Akira Nishino's team beat Indonesia 3-0 in Jakarta.

Yemen led twice against Saudi Arabia and were dreaming of major shock against the five-times World Cup qualifiers, but Salem Al Dawsari earned Herve Renard's side a 2-2 draw in their Group D opener. Singapore, meanwhile, pulled off a 2-1 victory over Palestine.

Australia secured a comfortable 3-0 win over Kuwait in their first qualifier in Group B while Anjan Bista scored twice as Nepal handed Taiwan a 2-0 defeat.

In Group E, India held Asian champions Qatar to a 0-0 draw in Doha and Afghanistan notched up a 1-0 victory over Bangladesh.

Jang Kuk Chol scored the only goal as North Korea defeated Sri Lanka to move onto six points in Group H, three ahead of South Korea, who kicked off their campaign with a 2-0 win over Turkmenistan.

The eight group winners and the four best runners-up advance to the third round of qualification.