News
Business
Movies
Sports
Cricket
Get Ahead
Money Tips
Shopping
Sign in  |  Create a Rediffmail account
Rediff.com  » Sports » Has Ronaldo grown too big for his coaches? 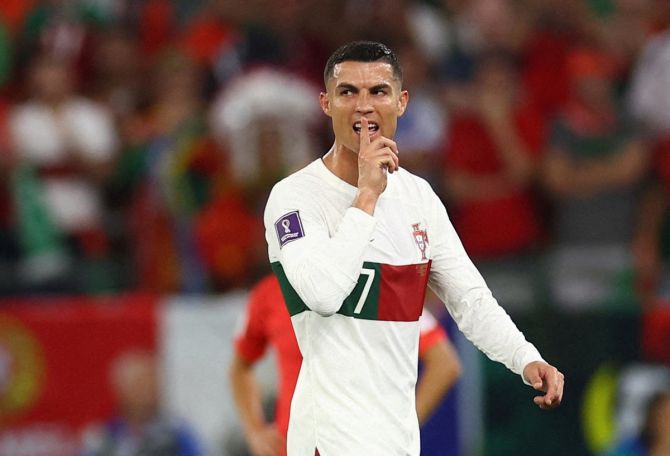 Cristiano Ronaldo denied that he had sworn at Portugal coach Fernando Santos when he was substituted during a dramatic 2-1 defeat to South Korea in the World Cup on Friday, as both teams advanced into the next round.

Ronaldo, Portugal's captain, said the comments he made as he left the field in the 65th minute were in fact aimed at a South Korean player.

Portuguese media said the former Manchester United, Real Madrid and Juventus player, who left the English club last month, appeared to challenge Santos over the decision to substitute him, using vulgar language towards the coach.

"What happened was before my substitution, the South Korea player told me to get off quickly. I told him to shut up as he doesn't have that authority. There was no disagreement (with the coach)," Ronaldo was quoted as saying by Portuguese reporters.

The 37-year-old is seeking to equal the Portuguese record of most World Cup goals held by Eusebio, who racked up nine in 1966 in England, the only World Cup tournament he played in.

Santos, asked by reporters about the substitution incident, also said a South Korean player had been aggressive in his comments towards the five-time Ballon d'Or winner.

"I saw the interaction with the Korean player and I have no doubts about what happened," Santos said.

Ronaldo was kept largely at bay by South Korea's defence in the Asians' last-gasp victory over Portugal that sent Uruguay out of the World Cup. But he was involved in the South Korean equalizer in the 27th minute when a corner struck him on the back and fell for Kim Young-gwon to score.

Santos made six changes to the side that beat Uruguay on Monday, mindful of the risk of yellow-card suspensions in the next round for which Portugal had already qualified before kick-off against South Korea.

"We're not going to lose confidence, this group has confidence, but it's a warning, a serious warning. Perhaps some positive things could come from this game."

He congratulated Paulo Bento, his predecessor as Portugal's manager who is now in charge of South Korea.

"I've just given him a hug. I'm unhappy, he is happy. I didn't facilitate anything but friends are friends, business aside," he added.

Portugal, by finishing top of Group H, are likely to avoid Brazil, the probable winners of Group G with Serbia, Switzerland or possibly Cameroon in the first knockout round. 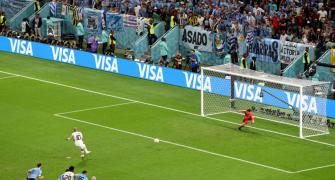 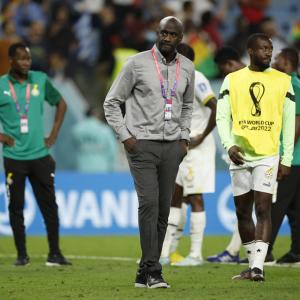