IMAGE: Samuel Eto'o, the 41-year-old four-times African Player of the Year had reacted angrily to the unidentified man's presence and struck him as he fell to the ground in the melee. Photograph: Samuel Eto'o/Twitter

Samuel Eto'o, the former Cameroon striker and current president of the country's football federation, has apologised after a "violent altercation" with a fan as he left a World Cup match on Monday.

La Opinion, a Spanish-language newspaper based in Los Angeles, posted a video on its Twitter feed in the early hours of Tuesday morning which it said showed Eto'o clashing with a man holding a video camera outside Doha's Stadium 974.

The accompanying report said the 41-year-old four-times African Player of the Year had reacted angrily when he was approached by the man and struck him as he fell to the ground in the melee.

"After the Brazil-South Korea match, I had a violent altercation with a person who was probably an Algerian supporter," Eto'o said in a statement on Twitter.

"I would like to apologise for losing my temper and reacting in a way that does not match my personality. I apologise to the public for this unfortunate incident."

Cameroon beat Algeria on away goals in the final two-legged African qualifier for Qatar in March, reaching the World Cup in dramatic style with an extra-time winner in the second match.

"Since the Cameroon-Algeria match on 29 March in Blida, I have been the target of insults and allegations of cheating without any evidence," Eto'o added.

"During this World Cup, Cameroonian fans have been harassed and pestered by Algerians on the same subject. I would like to mention that the scenario of Algeria's defeat was cruel, but perfectly in line with the rules and ethics of our sport."

Eto'o noted that all the appeals by the Algerian Football Federation over the result of the qualifier had been rejected.

"I therefore call on the Algerian authorities and Federation to take their responsibilities to put an end to this unhealthy climate before a more serious tragedy occurs," he said.

There was no immediate comment from Qatar's Supreme Committee for Delivery & Legacy, which organised the World Cup.

Eto'o, who enjoyed a lengthy career at the top of the game with long spells at Barcelona and Inter Milan, was appointed a "global ambassador" for the Supreme Committee in 2019.

Cameroon exited the World Cup at the group stage despite beating Brazil 1-0 in their final match. 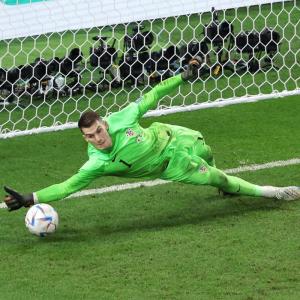